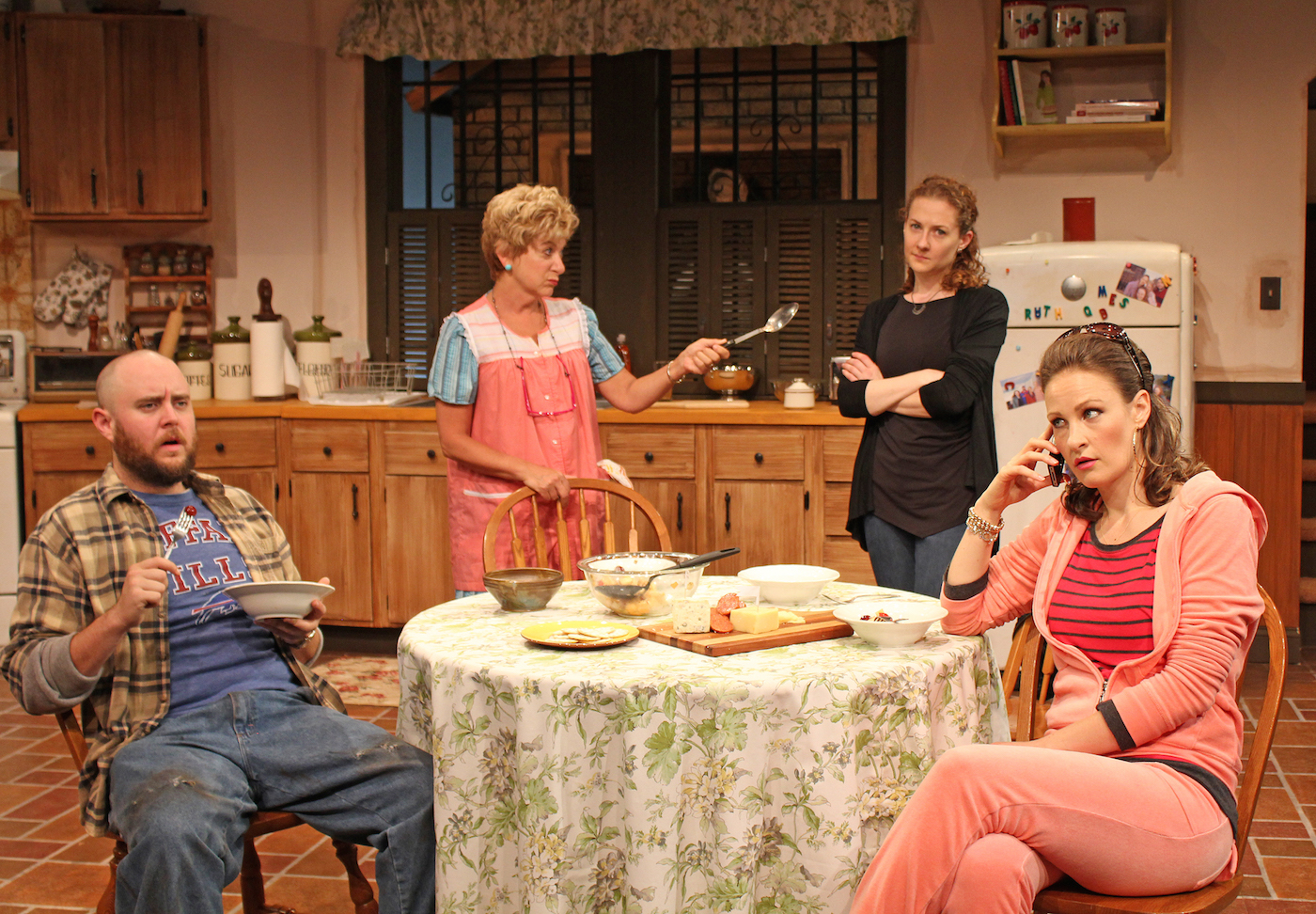 Sandwiched into Cortland Repertory Theatre’s summer season of big-time musicals and spoofs is the regional premiere of the gentle slice-of-life comedy of Miracle on South Division Street, which concerns a long-ago divine sighting that has defined the lives of a devout Roman Catholic family.

Playwright Tom Dudzick riffs on a familiar Buffalo legend about a barber who claimed to have seen a vision of the Virgin Mary in his own shop during World War II. Dudzick’s protagonists are the Nowaks, who have maintained a religious shrine in honor of the occasion. Reminiscent of one of those bathtub Jesus lawn fixtures, the shrine has since become a tourist attraction for decades.

Dudzick’s play offers some swashes of local color regarding the Queen City backdrop, as he reduces Buffalo to a pair of familiar cultural touchstones: unemployment and bowling. The Nowaks’ ethnic heritage is likewise boiled down to snippets of Polish references such as “dupa.” Clara is also a major fan of Elvis, which feels like a sly joke about being hopelessly devoted to another god.

But once the characters are gathered in the family kitchen, the plot quickly kicks in. Ruth, a wanna-be actress and playwright, intends to mount a one-woman show about the shrine’s history, albeit with some hidden secrets that the rest of the family doesn’t yet know. Will Ruth’s revelations threaten to turn the Nowak household topsy-turvy? You betcha sweet dupa.

Cortland Repertory’s production often seems like a throwback to the days of Norman Lear’s television reign, especially given Dudzick’s shrewd mix of social commentary, snappy dialogue and unexpected plot twists. Director Nathaniel Shaw maintains a sweet affection for his characters, however, keeping them real even as they are plunged into unreal (for them, at least) situations.

The interplay between the siblings is fun to watch. Jason Matthew Shipman offers a rumpled appeal for Jimmy, a roll-up-his-sleeves type with an initial secret that gets sidelined when even bigger tales are uncovered. Leah Gabriel’s Beverly, who enters the proceedings with a bowling-ball bag in her hand, shows the stress of a family member who can’t handle the truth. Melissa Macleod Herion handles the bulk of the play’s exposition when her Ruth character launches into the shrine’s facts, yet she also manages some sisterly sniping. “I was there for your saxophone solo,” Ruth tells Beverly, “and I had whooping cough!”

The real Miracle worker is Birdie Newman Katz as mama Clara, who is so Catholic that she can’t even utter the title of a certain Eve Ensler play in mixed company. Katz gets the bulk of Dudzick’s nifty one-liners and gleefully runs with them, such as “It’s not supposed to make sense: It’s religion!” And one secret regarding a family member (which some theatergoers will figure out early on) isn’t really so jaw-dropping after all, as Clara declares, “I know the score. I got cable.”

This breezy production is furthered enhanced by Nicholas Thornburg’s detailed scenic design. Everything about the Nowak household seems lived in, from the wall’s paintings of “The Last Supper” and Jesus Christ, to images of crosses and rosaries, and even a mousetrap near the refrigerator that’s ready to spring. Talk about kitchen-sink realism!

Show Stoppers
Something for Everyone
To Top