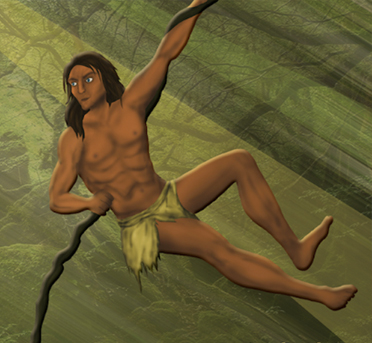 This Tarzan is aimed at youthful audiences. Think of it as The Lion King’s mini-me.

Tarzan has been swinging on his own vine for a long, long time. When Edgar Rice Burroughs launched Tarzan of the Apes in 1914, the guy was an avatar of British imperialism with racist impulses. Since then he’s been all over the jungle: a swimming champ, a body builder and a soft-core stud. It took the Walt Disney company’s 1999 animated feature Tarzan to emphasize our hero’s identity in his adopted simian family. After Phil Collins’ score won an Oscar, Chinese-American playwright David Henry Hwang (M. Butterfly, Chinglish) agreed to write the book for the 2006 Broadway musical, including more music from Collins. The Redhouse Arts Center production (running through Saturday, Aug. 2), with spirited direction from Stephen Svoboda, marks the show’s first appearance in these parts.

Disney-to-Broadway projects tend to favor large choruses that bring alive hosts of animated figures, often creatures. The show’s 13-player ensemble (with an average age of 12) goes through many costume changes, starting out as the waves that shipwreck a young English couple off the African coast. Most of the time they appear to be the larger gorilla family, funkily costumed by Katharine Tarkulich, featuring crash helmets with bristly hair. The kids are never at rest, often crouched in monkey-see gymnastic dance routines arranged by choreographer Brandon Ellis. He doubles as the sinewy Leopard, who kills the English couple and causes other mischief.

Meanwhile, the gorilla couple Kerchack (Maxwel Anderson) and Kala (Mary Nickson) have lost their newborn to the same Leopard. The abandoned white child might serve as a substitute, and much as Kerchack might admire it, he’s uneasy. More accepting is Kala, who croons “You’ll Be in My Heart,” supported by the ensemble. Nickson delivers it with profound feeling, one of the best moments in the show. Anderson and Nickson are nominally supporting players but both are as good as anything in Tarzan. Anderson can do anything, from broad comedy to opera, and his whole range is on display here. Nickson has apprenticed at the Redhouse and now, just finishing high school, she’s one of the best teen performers in town.

When we first see Tarzan he appears as tiny but lithe Justin Dunn. Given to beating his chest like a gorilla, he lopes across the stage with a simian gait. According to the premise he does not yet know human-speak but nonetheless belts out two numbers in plain English, “I Need to Know,” and a humorous duet with playful sidekick Terk (Brendan Didio), “Who Better Than Me.” Terk also serves as a peer instructor in the ways of the gorillas.

Portraying the adult Tarzan is hunky, fair-haired Anthony Crouchelli, an imported Equity player with many professional credits, including the lead in How to Succeed in Business (Without Really Trying). Clad in cutoff chino pants (hey, loincloths tend to slip), Crouchelli appears to be having a ball, a pillar of sunshine in a show with many dark moments. We get the first measure of his excellent pipes in “Son of Man,” together with Terk, Kala and the ensemble.

English naturalist Jane Porter (Kelly Downes) is never quite so scantily clad. Always shod in sensible shoes, she is thrilled by the biodiversity of the jungle when she and the Ape Man first meet. The only way she appears to go native is when the ensemble pulls off her dress (ahem!) so she can trot around in snug bloomers and corset. Downes, like Nickson, has grown up under Svoboda’s direction in several Redhouse musicals such as Bat Boy. This is her first lead, and her first solo, “Waiting for this Moment,” means she wants to run with it.

Tension is introduced by two annoying adults, both played by experienced community theater actors. Navroz Dabu plays Professor Porter, Jane’s father, a comic academic in an ill-fitting pith helmet who gives scientific inquiry a bad name. And Robert Brophy is the bigoted gunslinger Clayton, capable of inflicting real damage in the show’s darkest turn. Still, this Tarzan is aimed at youthful audiences. Think of it as The Lion King’s mini-me.