Francesca Zambello retains the common touch at Cooperstown’s Glimmerglass Festival. Determined that the artistic director of one of the nation’s only two world-class summer opera festivals (the other is Santa Fe) should not be seen as formidable, she wanders the pre-curtain crowd, bantering with whomever she can find.

Poking a young swain from Ithaca with the brochure for next year’s season, she asks, “Hey, why so formal? Relax!” He’s the only male in sight wearing a tie and a blazer. Her message seems to be that just because you’re scaling the artistic heights doesn’t mean you can’t have a good time.”

The trend has been up under Zambello’s leadership, both in attendance and in the opinions of talking heads in the media and on blogs. She has to work with a committee on selecting titles, using an unstated formula to mix the familiar and accessible with the rarely seen, but her taste shapes the lineup. This summer features a recent American work, Tobias Pickler’s 2005 An American Tragedy (July 31, Aug. 5, 7, 9, 11, 16, 24), adapting the 1927 Theodore Dreiser novel; that in turn is based on a notorious murder case rooted in Cortland. Richard Strauss’ German language Ariadne auf Naxos (Aug. 2, 8, 17, 21, 23) depicts with modern-dress frame for retelling a mythological narrative.

There are also two better-known productions on the repertory schedule. Giacomo Puccini’s Madame Butterfly (Aug. 3, 9, 15, 18, 23) is one of the two or three most-loved operas, all for good reasons. Zambello understands that with such popular material the company must exceed expectations. As for Rodgers and Hammerstein’s 1945 Carousel (Aug. 1, 4, 10, 12, 14, 16, 19, 22), Glimmerglass is presenting the unusual opportunity to see material usually cut in a performance running three hours as well as filling the pit with 42 musicians, as was originally intended.

Despite being Richard Rodgers’ favorite among all his works, and Time magazine’s 1999 nomination as the greatest American musical of the century, Carousel has long been in danger of being seen as Oklahoma’s neglected New England sibling. That’s partly the fault of the 1956 movie, which cut nearly an hour’s running time and jettisoned Agnes de Mille’s choreography. Daniel Pelzig restores de Mille’s intentions, notably the recap of the narrative at the end, but also the sailors’ jigs and hornpipes in the first act, along with the acting out of milling and whaling. John Culbert’s rough-hewn set, enhanced by Mark McCullough’s lighting, never lets us forget that we’re in the world of hard-pressed factory girls and coarse carnival workers. And conductor Doug Peck neatly finesses the two voices in the score, popular accessibility with operatic depth.

Bass-baritone Ryan McKinny, who had previously sung the role of Stanley in Andre Previn’s opera A Streetcar Named Desire, brings a savage charm to Billy Bigelow that virginal Julie Jordan (Andrea Carroll) cannot resist. Passion flows quickly, even though lyricist Oscar Hammerstein pretends hesitance. Their golden duet, “If I Loved You,” one of the greatest songs of American musical theater, comes early in the first act and is reprised in the second, after the lovers have suffered conflict and more.

Of the two lovers Billy is on stage more, and we learn about the depth of his vocalizations in the lengthy “Soliloquy” at the end of the first act, one of the reasons ambitious young baritones from opera companies cover this demanding Broadway role. With his rugged good looks as well as unanticipated dancing ability, McKinny is a triple threat.

The sweetness and purity in Carroll’s soprano mean she complements McKinny as his peer, no matter how badly Billy might mistreat Julie in the plot. Her lyricism brings affecting poignancy to her second-act solo, “What’s the Use of Wondering,” usually dismissed as one of the show’s lesser numbers, but not here.

Julie’s co-worker at the mill, Carrie (soprano Sharin Apostolou), and her beau Enoch Snow (tenor Joe Shadday), are nominally comic second leads but given the talents of both singers, along with Charles Newell’s generous direction, they are more than that. Apostolou’s capricious stage personality might indeed generate humor, but her solos, “You’re a Queer One, Julie Jordan” and “When I Marry Mr. Snow,” are exquisite. Similarly Shadday exhibits ready wit, getting maximum laughter out of a modest line like “Boston cream pie.” Their duet of domesticity, “When the Children are Asleep,” feels heartfelt and moving. Later, in the second act, when former fisherman Enoch inflates into a greedy bourgeois, both Apostolou and Shadday navigate the turn convincingly.

Four other players dominate different scenes. All the joy of spring after a long winter pours forth from Deborah Nansteel’s Nettie in “June is Bustin’ Out All Over.” And the secular hymn, “You’ll Never Walk Alone,” reaches deep in another direction, a goose-bump maker. No-goodnik Jigger Craigin (baritone Ben Edquist) delivers superb color numbers, one denouncing the boredom of a man who says he’s good, worthy of the ethics of Sportin’ Life in Porgy and Bess. Dancers Carolina M. Villaraos as Louise, Billy and Julie’s daughter, along with Andrew Harper as Carnival Boy retell the family in elegant detail at the end.

Company head Zambello takes the helm of Puccini’s Madame Butterfly, very likely the summer’s biggest draw. Her ability to get the voices she wanted is abundantly clear, especially with Korean-born lyric soprano Yunah Lee in the title role, which she had previously sung in Belgium, Quebec and Minnesota. Her second-act solo, “Un Bel Di Vedremo,” is guaranteed to break hearts. And Lee’s acting chops keep reshaping the mood in the long second act where little happens during her long vigil waiting for ships to enter the harbor at Nagasaki. Against the muted hints of the American Consul Sharpless (excellent baritone Aleksey Bogdanov) and all logic, Lee’s Butterfly continually renews hope, until it is crushed. 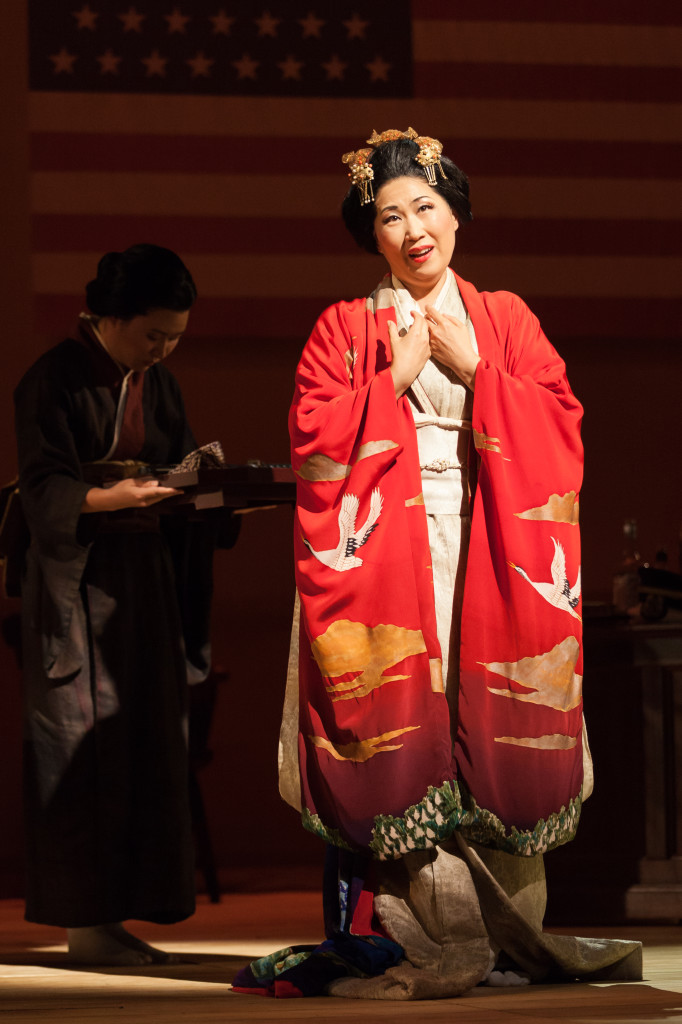 Zambello’s most striking innovation is to stage the opening scene in the American Consul’s office, crowded with tall, well-dressed western women carrying parasols. We should never forget that at the time of the dramatic action, the United States was an established industrial power while Japan was emerging from a self-imposed dark ages. Projected upstage are the words of the Pledge of Allegiance in bold Roman letters, seemingly benign but nationally assertive. They are above the apparently subservient Japanese inscription, which the Americans do not bother to read. Set designer Michael Yeargan’s contributions, perfectly lighted by Robert Wierzel, are not only gorgeous and arresting but rich in symbolism, almost a parallel dialogue with the audience. Impossible to ignore are two vertical, translucent panels, perhaps of rice paper, one representing Japan, the other the United States, which tumble down from time to time, obscuring what we try to see through them.

As one of the great cads of dramatic literature, Lieutenant Benjamin Franklin Pinkerton is hard to humanize. Syracuse-area tenor Dinyar Vania presents the hunky good looks and smiling sincerity that are convincingly seductive. Pinkerton’s love duet with Butterfly, “Viene la Sera,” is so delicious that you can believe, despite knowing the plot going in, that she has betrayed her family, her heritage and her faith for something that could be lasting and true.

Earning waves of applause at the final curtain is mezzo soprano Kristen Choi as Suzuki, Butterfly’s companion and confidante. Suzuki is never seduced by the West and is more perceptive than the leading lady, so she suffers first when the tragic news is revealed.

Three other players win their own ovations: Thomas Richards as the voice-of-doom Bonze; Ian McEuan as Goro, the cultural sellout marriage broker in a straw boater; and, most astoundingly, pre-schooler Louis McKinny as Pinkerton and Butterfly’s child Sorrow. Son of Ryan McKinny (Billy Bigelow from Carousel), Louis must follow perhaps 50 cues in Italian over a half-hour in the second act. All this, and with kindergarten still in his future.

Francesca Zambello, who is also artistic director of the Washington National Opera, can leave upstate smiling at the end of this summer.

The Glimmerglass Festival at the Alice Busch Opera Theater is a few miles north of the town of Cooperstown on Route 80. It is about a 75-mile drive east from Syracuse on scenic Route 20. For ticket information, call (607) 547-2255