This Thanksgiving, bear in mind that there’s more to the season than binge eating and running up credit card debt. It’s about caring about others, which is why the other day I loaded up my Honda Element with three Thanksgiving gift boxes for three particularly needy souls. I then personally delivered the care packages to their homes in some of scariest neighborhoods in Central New York, including Snooks Pond and Syracuse University.

Everything for a sumptuous Thanksgiving feast was included as long as it could be purchased at Walmart: tins of “Oven Roasted” Turkey Spam, jars of thick gravy-like ooze, sweet potatoes, a ready-made pie crust. I even threw in canned green beans, cream of mushroom soup and french fried onions for that perfect seasonal casserole treat. I’m just a really good person. 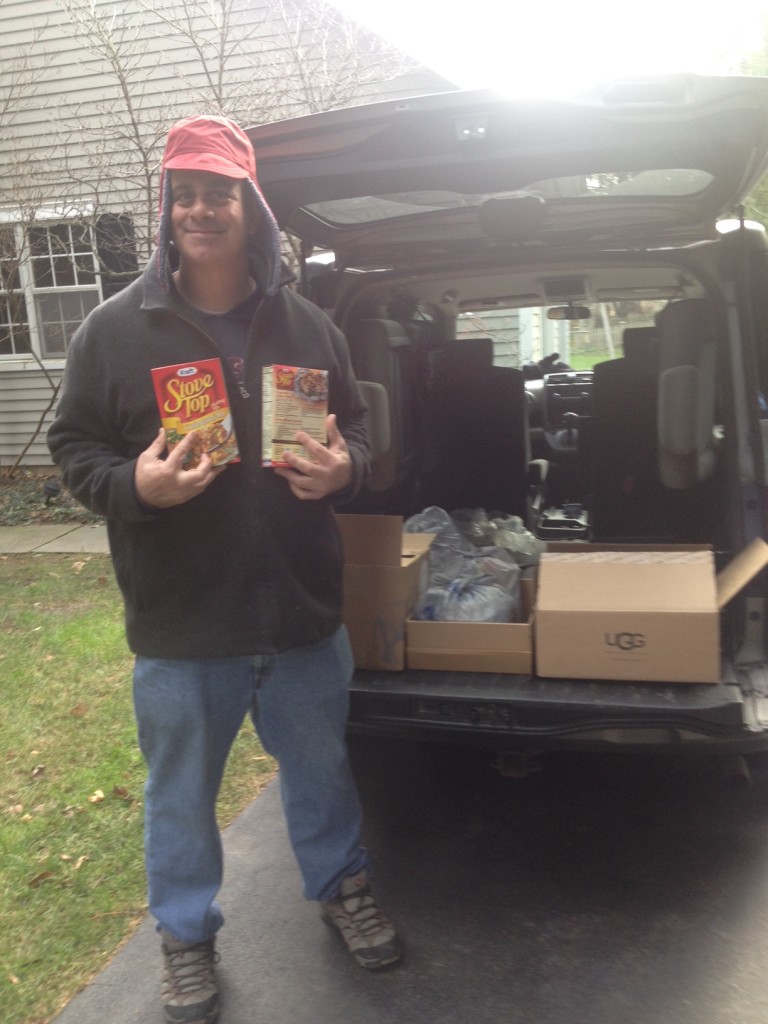 And who, exactly, were the recipients of this wondrous bounty? Sorry, but I have sort of attempted to keep their identities secret to preserve their dignity. But I am happy to share their jaw-dropping stories of hardship and perseverance. May they inspire you to give generously, as well:

Person A: Although he logged long hours each day, “Ol’ Doc Smithers” was barely making ends meet on $625,000 per year running a free clinic for the indigent downtown. A side job brought in an additional $349,245 per year, but the financial pressures were overwhelming. Smithers was broke, barely able to afford his small nursing staff or to heat his home hot tub to 101 degrees. He tried looking for other work, but opportunities were scarce. A scandal-tainted college in Pennsylvania with a low-level administrative job to offer showed some interest, but perhaps due to Smithers’ advancing age, it decided to look elsewhere. Then, disaster struck. The owners of the free clinic fired him because of a minor accounting error that coincidentally amounted to $349,245.

Now the veteran caregiver is unemployed. His cramped, six-bedroom, 6,000-square-foot plus Georgian Colonial in DeWitt is being offered at a distress-sale price of $799,900. Good luck with that. Maybe if he moves it a few blocks to Manlius.

The easy thing would have been for me to do nothing, but instead, I opted for a small healing gesture. I placed the care package on his back porch by the grill, hidden from prying eyes of neighborhood thugs and drug dealers. Included was a seasonal greeting card reminding this innocent victim of our chaotic health care system that “true abundance” is being together with family and friends.

Person B: For years, “Rob” had it good. He wasn’t getting rich on his modest shopping plaza out Hiawatha way, but it was a decent living and he loved being around people–especially contractors, whom he always treated with the utmost fairness and respect. Rob was known as the guy with a kind word for everyone, a twinkle in his eye and a heart of gold. But life isn’t fair sometimes. Some months ago, a Canadian smoothie giant reneged on its 10-year lease of a kiosk at Rob’s little marketplace. That represented a staggering $800,000 loss of income. Out of desperation, Rob sued for the full amount of the lease, but let’s be real: You can’t squeeze pineapple-and-mango juice with protein powder and wheat grass out of a turnip.

My heart weeps for Rob, who teeters on the edge of insolvency as Christmas approaches like a high-speed bio-fueled tram. As I drove onto the grounds of his new $2.7ish million mansion off Snooks Pond, I wondered if the barren landscaping will ever be completed or if there will be money to maintain the dam to keep his neighbors’ properties from turning into swampy, malarial death zones. Quietly and respectfully, I left the care package on his porch along with a Thanksgiving card of a more personal nature. It noted that whenever I count my many Thanksgiving blessings, Rob is at the top of my list. And I mean that.

Person C: A born educator, “Kandy” wasn’t doing it for the money when she agreed to lead an obscure academy in Syracuse that caters to kids from Long Island who cannot get into real college. Her meager $650,000 stipend had her placed a humbling 14th among top-paid chancellors of private schools nationwide. But with Kandy, it was never about her; it was about creating opportunities for others. Her tireless commitment to lowering academic standards reached its triumphant pinnacle in a brawl at the student center in which nine young scholars were arrested–and in the problematic academic career of basketball player Ernie Dibbledorfman (not his real name).

Her selflessness included extending a helping hand to the surrounding community by purchasing much of it on a tax-free basis. It’s safe to say that everyone who met Kandy felt bathed in “a connective” glow. Thus, it came as a shock when the trustees rated her performance merely “Fine” and canned her, effective next year. A new headmistress job in East Manslaughter, N.J., awaits, but at barely half the money.

Personally, I believe in Kandy. She has the smarts and persistence to get beyond this nightmare. But that doesn’t mean she can’t use a little help. Imagine if almost half your income was suddenly…gone.

As I walked up to the chancellor’s modest manse, lugging her gift box, maintenance workers were moving huge stone planters that looked like they each weighed a thousands pounds. The diminutive Kandy, ever the gamer, was helping them as best she could, grunting and straining with all her might.

Just kidding. I never saw her.

Quietly and respectfully, as is my way, I left the box on her stoop. Included was a card that wished her much Thanksgiving joy long after the leftovers–that’s us, I believe–are gone.

What’s the Rush?
Giving Thanks
To Top