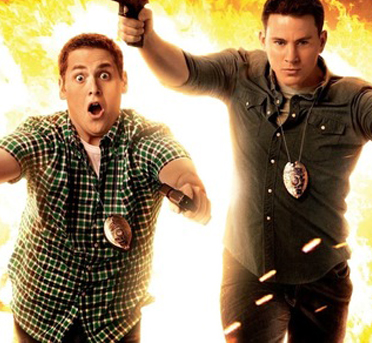 Can you still believe Jonah Hill and Channing Tatum as college students? Well, the bunch of folks laughed at seeing old Jonah perform slam poetry and Mr. Tatum walk on to the football squad on a raining Friday in Cape Cod seemed to be.

Welcome to the cusp of summer 2014 and the first week of 22 Jump Street.

The sequel to popular comedy 21 Jump Street – itself born from the 1987-1991 FOX TV drama of the same name that starred Johnny Depp its first four years — stuck to what worked with film watchers just two years ago.

Hill, as Schmidt, and Tatum, as Jenko, are two police officers in an unnamed city that goes by Metro. Neither the brightest (Jenko) nor the most athletic (Schmidt), they’re again paired as undercover cops and charged by Offerman’s Deputy Chief Hardy to get in there at MC State to find the dealer of the drug Why-Phy (Work Hard Yes, Play Hard Yes), which resulted in the death of a student.

The attending unit, led by Cube’s Captain Dickson, has one-upped to 22 Jump Street, taken over a beautiful Vietnamese church as headquarters, and been given unlimited funds to solve the crime with Schmidt and Jenko playing students.

The antics and jokes are many in this jam-packed, never-stopping film directed by Phil Lord and Christopher Miller and co-written by Michael Bacall and Oren Uziel (with Hill also getting a billing for story credit).

My favorite two Jenko lines are when he declares he’s the first in his family to pretend to go to college, and when he decides that the big budget for the operation means they’ve been give Cate Blanchett.

Schmidt is at his best when he’s fighting the evil Mercedes, played with a devil’s tongue by Jillian Bell, alternating punching the girl and denying there’s any bedroom-eyes attraction going on, and ducking a promised retribution from the gun of Jenko to have the bullet ricochet … you’ll see.

I did have a red flag.

During this cop buddy dance between Schmidt and Jenko, and Jenko’s pal-up with surfer dude/college quarterback/frat boy Zook, played loose-headed by Wyatt Russell, there’s an obvious send-up of guy-guy friendships in movies such like these in the past.

They used language that transcribes to real romantic relationships.

They were straight characters looking and sounding like they were gay characters but not knowing it.

And as people laughed all around me about this, I didn’t think it was all that funny. I wondered if it sent an extremely inappropriate homophobic message. I didn’t like its tone.

Then again, when Captain Dickson went ballistic when he found out Schmidt had slept with his student daughter Maya (played well by Amber Stevens) — the undercover cop unaware of the family ties — I laughed. I took it more as an age-inappropriate thing than a racial thing; the interpretation of humor is always up for discussion.

Are You Any Dumber Than Before?
The Rover Gets Intense with Outback Stakes
To Top