On that first sunny day of spring, April 2, Rep. John Katko had just completed his first quarter representing Syracuse and the surrounding areas in New York’s 24th Congressional District when I asked him about several issues that should be familiar to Syracuse New Times readers.

ISIS and Shades of Gray

Katko has been appointed to the Bipartisan Task Force on Combating Terrorist and Foreign Fighter Threat. Given that role, I asked him if he believed that President Obama had authority to conduct air strikes, and to provide advisers and arms to forces fighting ISIS.

“I think if it rises to the level of an armed conflict, the War Powers Act mandates that the president work with Congress on it,” Katko said. “Even if it technically doesn’t require congressional action, it’s probably a good idea from a consensus standpoint that he work with Congress.”

“Obama has reached out to Congress,” said Katko, which he says is “always advisable. From a legal standpoint, under the War Powers Act that’s kind of a gray area.”

To station troops on the ground, he said without hesitation, would require further legislative action.

Katko sits on the House Committee on Homeland Security. From that seat he’ll have to review sections of the post-9/11 national security law known as the Patriot Act. Section 215 of that law has been cited by both the Bush and Obama administrations to justify their collection of data on U.S. citizen’s phone calls and emails. It expires in June. Will Katko vote to renew that provision?

“Not in its current form,” Katko answered. “I don’t agree with it. I’m concerned from a privacy standpoint. I’ve been doing wiretaps for 20 years (as a federal prosecutor). We got a court order for everything we needed and we had to prove to a judge why we needed it. I don’t think you can just throw out that standard. Of course we have to balance the privacy issues with the national security issues, and I’m not sure the first round of the Patriot Act did that well enough.” Katko said he hasn’t seen proposed language yet, but would like to see “substantial safeguards on how they use the information.” 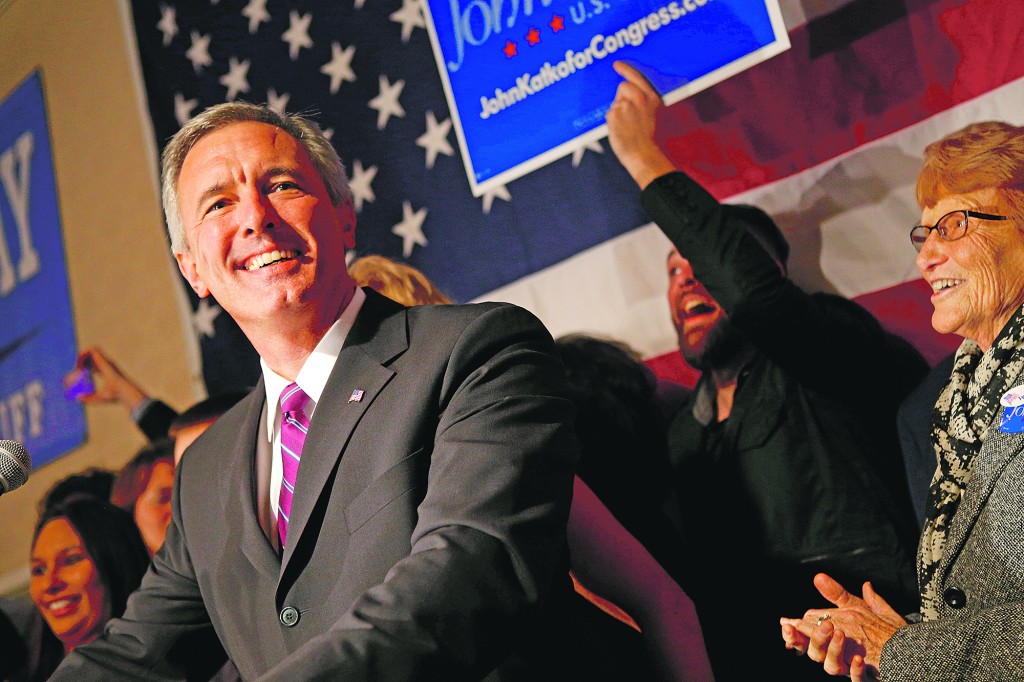 John Katko’s nephew, Michael “Tots” Heagerty, leads the cheers on election night. The congressman is in the foreground.

Katko has sat in on a few hearings about rail shipments of Bakken crude, the volatile oil that chugs through Central New York every day on the railroad tracks.

“This is very serious,” he said. “These trains come right through the heart of Syracuse. It’s frightening to think how much crude comes through the middle of this city every day. Highly volatile crude oil. Highly flammable. One hundred car trains going through every day – that’s a real concern.”

Katko worries that these trains could prove a target for terrorists. “Law enforcement,” he said, “should be dealing with a terrorist-type incident with respect to the trains and practicing how to respond.”

Then he had this to say about President Obama and environmentalists opposing the Keystone pipeline.

“I’ve sat in on a hearing where members from the rail industry were asking Congress for more regulation. I repeat, they wanted more regulation to come out regarding specifications for upgrades of rail cars that are transporting this volatile crude. They’ve been asking for it for years, and this administration, for whatever reason, has just dragged its feet. That to me is the height of irresponsibility by the Obama administration. They (the rail companies) are asking for some clarity, and then they’re going to invest.”

He agreed that any such changes will take years. So what would he say to parents who send their children to trackside schools or senior citizens whose windows look out on the train yards?

“Local law enforcement and first responders need to prepare and conduct drills,” he said. Katko added that he has tasked his district office director, Tom Connellan, with “reaching out to local law enforcement to see if there is anything that we can do.”