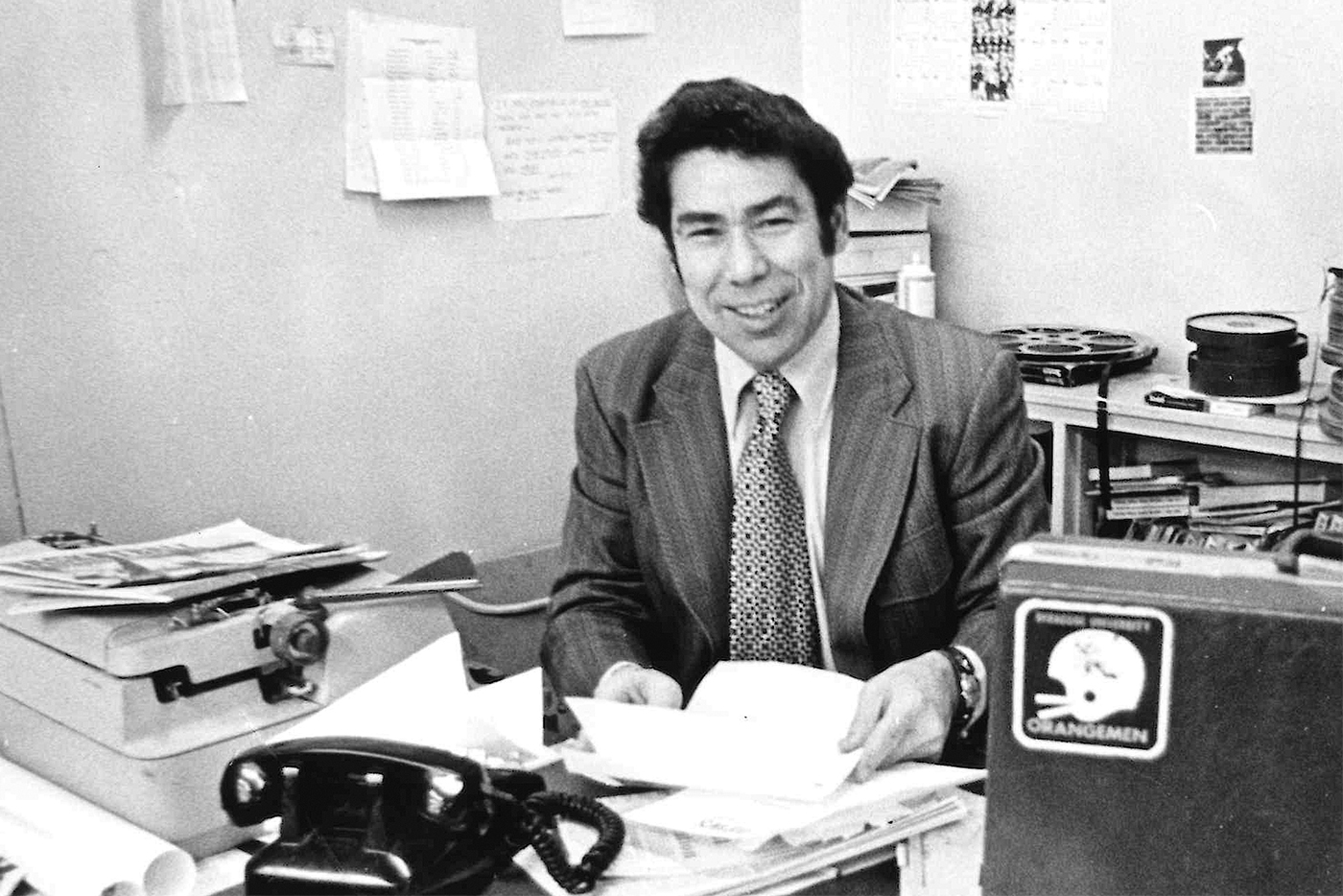 Tribute to the late Joel Mareiniss.

The March 5 passing of Syracuse sportscaster supreme Joel Mareiniss at age 87 resulted in an avalanche of public tributes (Dave Cohen and Bob Costas, among them) and a tsunami of nostalgia for baby boomers who fondly recall the sports anchor’s long stints on then-WSYR-TV and radio, where he handled play-by-play duties for Syracuse University’s football and basketball contests, as well as hosting the Sunday-morning Syracuse Bowls TV show during the 1960s and 1970s. Mareiniss also served as a favorite announcer with the Syracuse Chiefs ball club

For this tribute down Mareiniss memory lane, here are excerpts from writer Steve Forrest’s question-answer session, distinctively headlined “An Interview with Joel Mareiniss,” in the Feb. 10, 1972, issue of the Syracuse New Times.

Are you a Syracuse native?

No, I was born in Newark, N.J. I first visited Syracuse on a typical snowy day when I came for my college interview in 1946. I am a graduate of Syracuse University’s School of Journalism and had worked on The Daily Orange when it was in the old Orange Publishing Building across from Archbold Stadium.

At age 13 I was listening to a bowl game on New Year’s Day and I was so impressed with what I was hearing that the germ was born and my career was decided. Many others come into the same profession by accident, but this is what I always wanted, and I aimed for it, and now I am doing it.

The first time I sat down in front of a microphone was to do the first radio newscast to be transmitted by a college radio station, at Syracuse University in the fall of 1947. Then after the Korean War when I came out of the Army in 1953, I enrolled at SU to get my masters and I became a summertime replacement announcer at WSYR. It was supposed to be a temporary job but has become an 18-year job.

Where did you get some of your well-known broadcasting phrases, such as “Eats the pig” during football season?

Every successful sportscaster is a combination of what he has seen from other people in the profession. I listen constantly to sportscasters when I am driving at night, or when I am driving across the country. I am intrigued by apt expressions which describe something better or more descriptively, and I write them down. I have a whole book of them, many of which I may not use at all. “Eats the pig” is one of my own creations, and one of my favorites in basketball is when somebody “goes up the invisible ladder.” Usually, when the situation arises, I automatically come up with them.

One thing I will never forget was a cliché taught to me by a former head of the SU radio-TV department: “spots on the leopard,” which I associate with myself. It means that one should not impersonate others, just as the leopard is the only animal with spots. You might call me a combination of many sportscasters, but the standout part is Joel Mareiniss.

What exactly is your style of announcing and reporting?

I don’t ever want to seem like an announcer who is a person acting like an announcer. I strive to make it appear to the listener as if I am his eyes at the game and talking to him in a conversational manner. Many people will criticize me on radio and TV because I say, “Good evening and how are you tonight?” That started because I wanted to be different from the normal sportscaster’s opening. This gives everybody a personal feeling right off the bat. Somebody told me of their late uncle who used to listen to my show every night, and he would answer my opening by saying, “Fine, Joel, and how are you tonight?” My style is not folksy or controversial, but more like a friend.

What is your most remembered sports event in SU history?

In 1959, our first football game of the season, Syracuse had 19 first downs in the first half of that game against Kansas, and yet we were still trailing 7-6 at the end of the first half. John Hadl was the Kansas quarterback that year and threw some long passes in that half which kept the game so ironically close. From there, though, SU developed into the National Championship team.

Who would you say is the most colorful athlete from Syracuse University in recent years?

I would like to think of a golden era of SU sports: Larry Csonka, Floyd Little and Dave Bing, all at the same school at the same time! But we cannot forget to mention Jimmy Brown, Ernie Davis, Jim Nance and John Mackey. Out of all of these it is difficult to pick just one. Davis played on the best SU football team, whereas Jimmy Brown was more like a one-man gang. The greatest player on the greatest team is yet to be born.[snt]