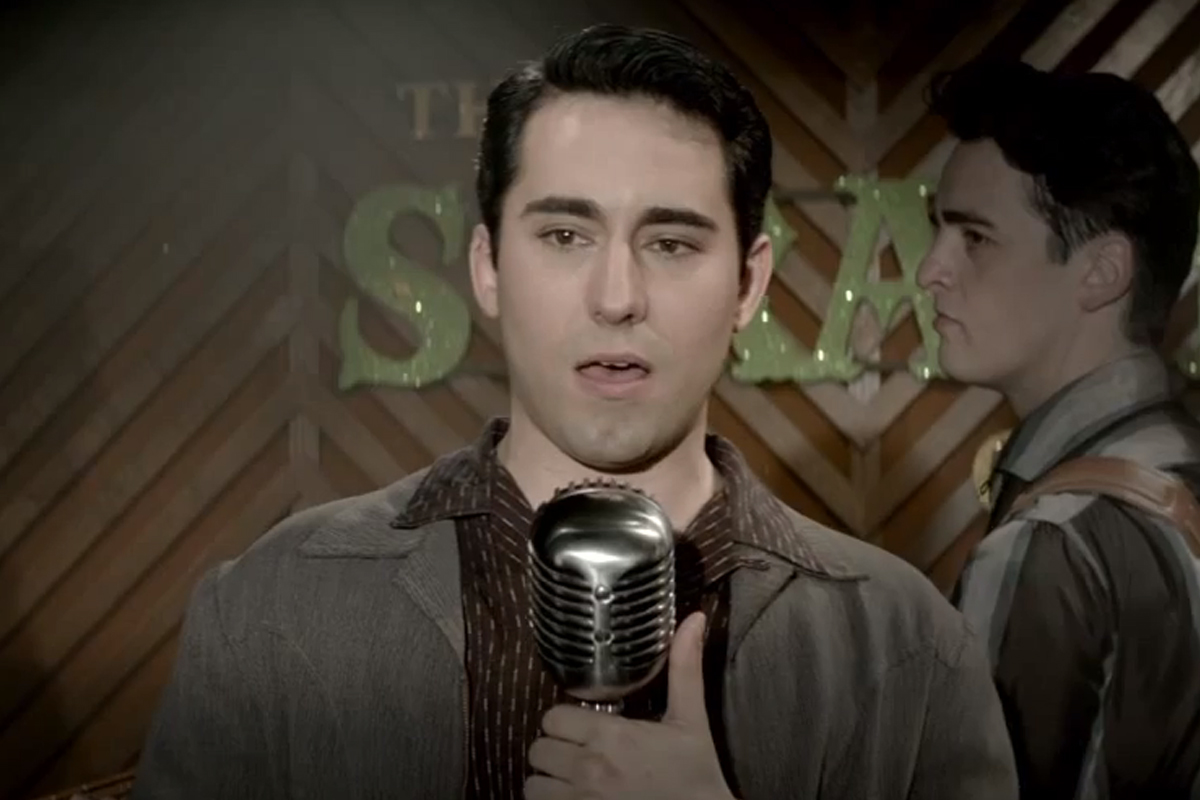 With a lifetime of tapping my toes to the music of the Four Seasons and Frankie Valli but not one live viewing of the musical detailing the history behind it, I entered the Sunday matinee in the crowded Destiny USA theater carrying great hopes for Jersey Boys.

Then for the first 45 minutes or so of director Clint Eastwood’s interpretation of the screenplay written by Marshall Brickman and Rick Elice, I was vastly underwhelmed.

Two budding hoodlums, Tommy and Nick, were tucking young Frankie under their wing as they ran not-so-minor heists by late night and tried to make good music earlier in the night. Frankie’s interested in both — the music, more so, sure, but the capers, too, to get in with the older guys in the Jersey neighborhood.

Arrests are made one night, older connected guys use police ties to save the kid with the voice, Frankie’s parents send the stink eye at these older hoodlums as they shuttle off to jail …

Eastwood has this all shot with just a tad more color than black in white, and with a lot less zip in its doo-dah than I imagined it would have.

But little by little, the dynamics and personalities of this documentary become more set in stone. Frankie, played by John Lloyd Young, indeed has the most vocal talent and savvy of the neighborhood guys, despite what ringleader Tommy DeVito, played by Vincent Piazza, wants to believe. Nick Massi, played by Michael Lomenda, will work hard and take a lot of crap to make it. The final link to success, Bob Gaudio, played by Erich Bergen, has the writing chops to match Frankie’s voice.

The colors seem brighter in 1962 as Gaudio pens “Sherry” on a bus, the four find the name Four Seasons on a neon bowling alley sign, Tommy borrows $3,500 from a loan shark, and a record is recorded. Very good things happen quickly thereafter, too, with Gaudio’s songs “Big Girls Don’t Cry” and “Walk Like a Man.”

The movie gets more interesting with the resulting ego clashes and unthinkable wrongs committed by Tommy, who seems to think his role as the original tough guy also carries a Teflon coating.

If the music industry is tough, so, too is the family — Frankie has troubles with his wife and oldest daughter, and Tommy gets in deeper with the mob.

It’s a test of faith and belief and loyalty in many, many way. And that’s when the story catches up to the music.

One classic scene details a meeting brokered by mob honcho Gyp, played with customary cool by Christopher Walken, with the loan shark Tommy’s in for to the tune of $162K and all four band members. All hell breaks loose, and the personal baggage of the singers spills out everywhere.

Soon after, we’re treated to the nervous Frankie delivering his big solo hit of 1967, “Can’t Take My Eyes Off of You,” singing like a man who agreed to cover somebody else’s six-figure debt and then had to wonder if anybody liked his kind of music anymore.

Soon the movie jumps to the 1990 Rock Hall of Fame induction of The Four Seasons, the first time the four are back in one spot in 20 years.

Hell, yes, it’s dramatic. How will they react to this reunion?

But then Eastwood has them all look into the camera and say their piece. And he flashes back to the old days.

Sure, it tied it into a tidier package.

But it kind of leveled off the drama, too.