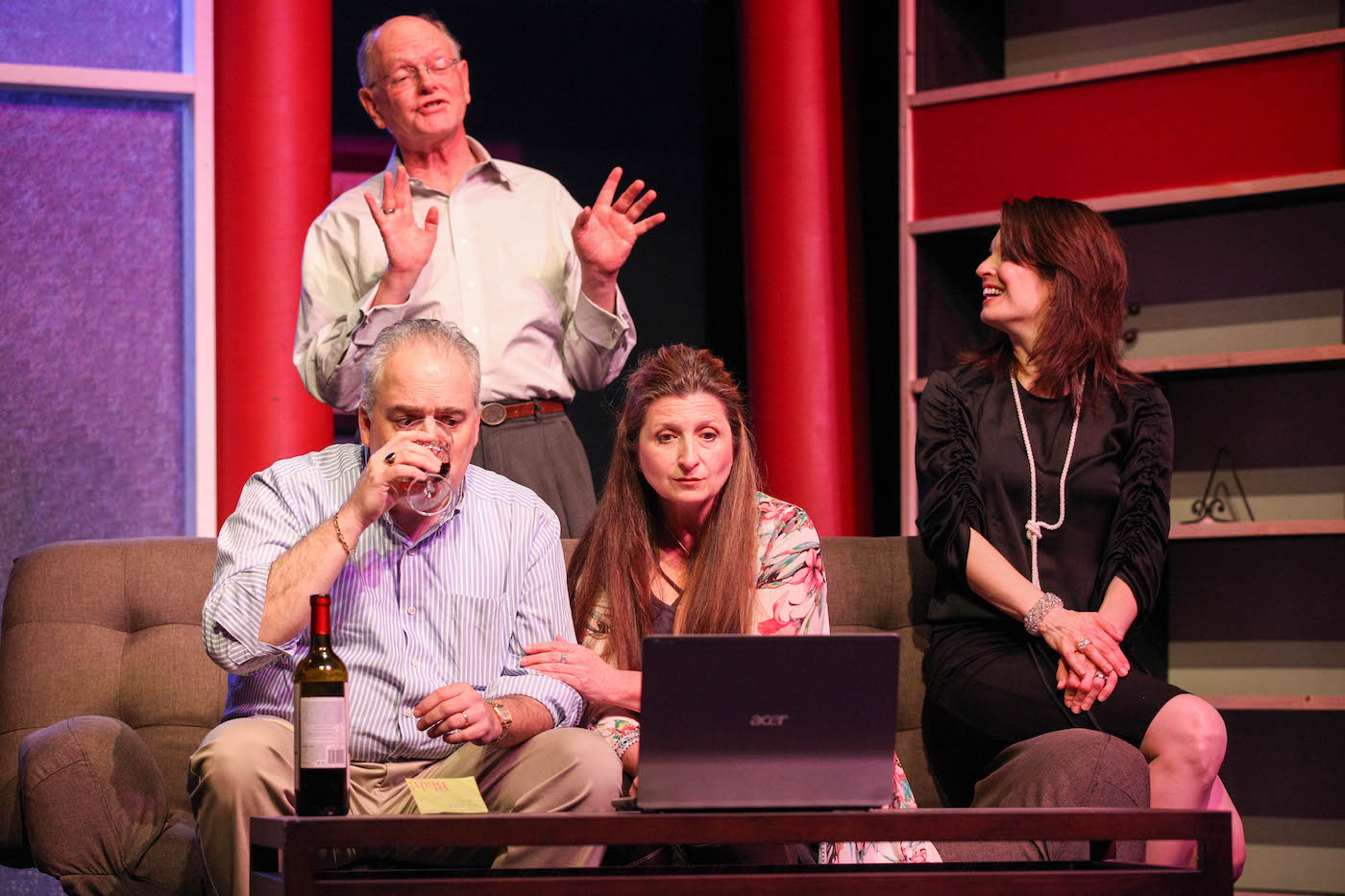 Spoiler alert: The storied canine cited in the debut of Syracuse New Times humor columnist Jeff Kramer’s new comedy The Golden Bitch (running through Saturday, April 29, at Cazenovia College’s Catherine Cummings Theater), like Godot in Waiting for Godot, never appears on stage. It is left to our imagination what it might look like.

The title refers to a breeding golden retriever. It is “golden” not simply because of the fur from one of the breeds but more because it has cost an affluent couple, Alan (Michael O’Neill) and Nell (Katheryn Guyette), a small fortune to obtain. If they weren’t going for a pure breed, why didn’t they just go to the local dog rescue, called Pawsitively Perfect, and pick out a needy pooch? The question galls their resentful pals Tim (Edward Mastin) and Reilly (Moe Harrington), who run the place.

Great differences can make a war, but passionately felt small differences benefit comedy. Both couples are dog lovers, and being called a “cat lover” is the gravest of insults. Both are also socially and environmentally conscious so that eating farm-raised salmon would be a grave offense. One must have instead line-caught Alaskan King. Smoking a cigarette is a hideous crime. And Reilly and Tim appear to be veteran granolas, although she speaks of still yearning to see Menopause: The Musical. 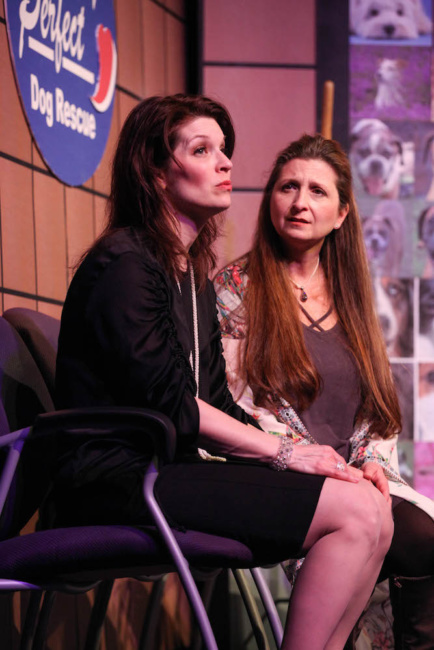 Alan and Nell live in an upmarket apartment. Scenic designer Navroz Dabu’s poshest-ever set makes it appear to be a space that would never welcome pets. Alan is in advertising and Nell is an immigrant rights attorney. Tim is a medical litigation consultant protecting doctors. He “makes the world safe for malpractice,” he boasts. Alan offers a toast to “operating-room blunders.”

In a useful program note, playwright Kramer identifies himself with the dog lovers, but many of his barbs are turned against their obsessiveness. Early in the first act Nell proclaims, “We’re expecting,” prompting a three-minute mistaken identity gag in which Reilly and Tim think they’re anticipating a human bundle of joy instead of the professionally bred golden bitch of the title. A little while later Nell boasts, “He saves lives. They’re human, but they matter, too.”

We never know where the action takes place, although Alan and Nell’s apartment implies a sophisticated metro area, even without Gotham accents. The Alaskan King reference hints at Seattle. In the same program note, Kramer tells us that his wife Leigh is the president of Helping Hounds near Shoppingtown in DeWitt, an enterprise quite a bit like Pawsitively Perfect in the play. Throw in references to Wegmans and Route 81, and the show could take place here.

The Kramer family’s connection to Helping Hounds, however, does not tip the playwright’s hand toward one couple over the other. When Alan and Nell donate $10,000 to Pawsitively Perfect early in the action, it does not tilt our affections toward the needy receivers. Much of The Golden Bitch is a verbal Punch-and-Judy show in which each of the four gets to throw a jab. Humor commonly relies on stinging bits, as the spirit of Don Rickles snarls in each of the characters.

Given that Moe Harrington is the most experienced comic player of the four and has been featured in both previous Kramer stage works, Lowdown Lies (2008) and Reaching for Marsby (2012), one might expect that we’d pin our hearts on her Reilly. She punctures that when she calls to her husband Tim and snaps her fingers, and after a one-beat pause utters the command, “Come!”

Jeff Kramer is the playwright as auteur. He got the team he wanted, starting with inventive and resourceful director Len Fonte, his handpicked cast and backstage people. He also ran the advertising campaign, with billboards on express highways. Samuel Beckett of Waiting for Godot never had so much control of the words on stage.

Latina Heroine Headlines Her Own Comic ‘La Borinqueña’
On The Wild Reeds’ New LP, Change Is Good
To Top