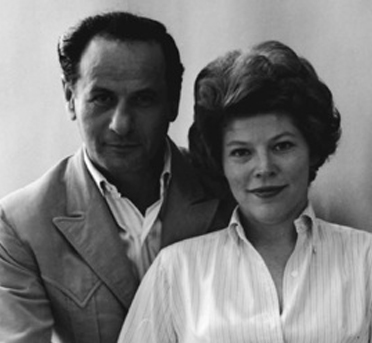 The new year is barely seven weeks old, but Syracuse Stage’s forthcoming production may be THE Central New York theatrical event of 1982. Friday’s opening of Twice Around the Park not only marks the world premiere of two Murray Schisgal one-act comedies, but also the area acting debuts of Anne Jackson and Eli Wallach, longtime friends of Schisgal and Syracuse Stage Producing Director Arthur Storch.

Twice Around the Park consists of two seperate one-act plays: A Need for Brussel Sprouts and A Need for Less Expertise. Sprouts concerns a policewoman’s efforts at silencing an obscure actor’s loud rehearsals, while Expertise focuses on a middle age couple’s attempts to pump life into their long marriage.

In 1963, Storch directed Jackson and Wallach–Who are married–in Schisgal’s one act plays The Typists and The Tiger in what turned out to be a long running venture, and the quartet are hoping for a similar success with this double bill.

Jackson praises Schisgal’s comic philosophy and outrageous humor, noting, “It’s not just tomfoolery, but it has so much pain and humanity. He’s an artist that would love to be commercial, but he doesn’t do the gags or what the audience wants.” Jackson also considers Schisgal’s earlier efforts as forerunners of later Woody Allen comedies and says Schisgal’s plays will endure as Moliere’s have.

The couple have warm feelings for director Storch. Jackson believes that Storch understands Schisgal’s humor because the foursome were raised in the same middle-class environment on New York’s East side.

“Arthur gets Murray’s humor,” remarked the actress, “which is not only popular, but a humor that people will remember.”

Wallach added that a good director “must have an infinite patience and Arthur is no martinet.”

Wallach is enthusiastic about the uninterrupted work atmosphere available in Syracuse because it gives performers a chance “to do a play for a month and find insights and values in it.” Visiting Syracuse University, the Everson Museum and a few antique shops are on the Wallach’s agenda in the coming weeks.

They have considerably less enthusiasm about proposed federal spending cuts in the arts.

“It’s astounding to me that the budget for military bands is much larger than the entire budget for the arts,” Wallach said. “It’s outrageous to think the corporations are going to pick up all the expenses.” He cited New York stage as having a very progressive arts program because, “they realize you have to feed another aspect of the psyche.”

Perhaps most refreshing is the observation made by Wallach concerning the profession he and his wife have chosen.

“Everybody keeps looking over their shoulder for stardom and success as the platitudes about what a career is,” Wallach said. “To us, a career is work and finding new projects. The feeling when we’re working on plays is not that we’re losing all the great opportunities to do movies and television, but that we are doing what we want to do.” And what they “want to do” is something many area theatregoers would like to see. Twice Around the Park will play Feb. 19 through March 14 (1982) at Syracuse Stage.

A character face for the ages, Eli Wallach dies at 98
Lesbian Mothers Forced to Choose Their Lovers or Their Children
To Top