Syracuse will have another reason to raise its hand and wave it high.

In order to keep Syracuse on the map and to have it shine, a little bit more has to be done to polish it up.

When Syracuse is polished and confident, businesses (not just restaurants) will come and stay and Central New Yorkers will not hesitate to opt for a restaurant (among other things) that is locally-owned and for products that are American-made. Our music and entertainment scenes will grow as well. We’re smack dab in the middle of the state, and so we should be that hub.

In 2016, Syracuse will have another reason to raise its hand and wave it high.

The Hotel Syracuse, a once nationally-recognized hotel will be thriving again, opening its doors to a new era. The historic and classic sexiness of the main areas will be maintained while the rooms themselves will go through a refurbishment.

On December 28, I walked inside and down the halls of this beautiful building for the Suite Stories Ghostwalk organized by Onondaga Historical Association.

“Having these tours now is the best time, before the renovations start,” said Gregg Tripoli, Executive Director of the Onondaga Historical Association. He expressed his excitement regarding the tours, and for the positive public reaction and participation as well.

I had expressed my intrigue with The Hotel Syracuse earlier this year, and a desire to step inside has been fulfilled. Although I did not wander the hotel alone, it was the first time my feet touched the lobby floor since my Junior Prom in 2000. 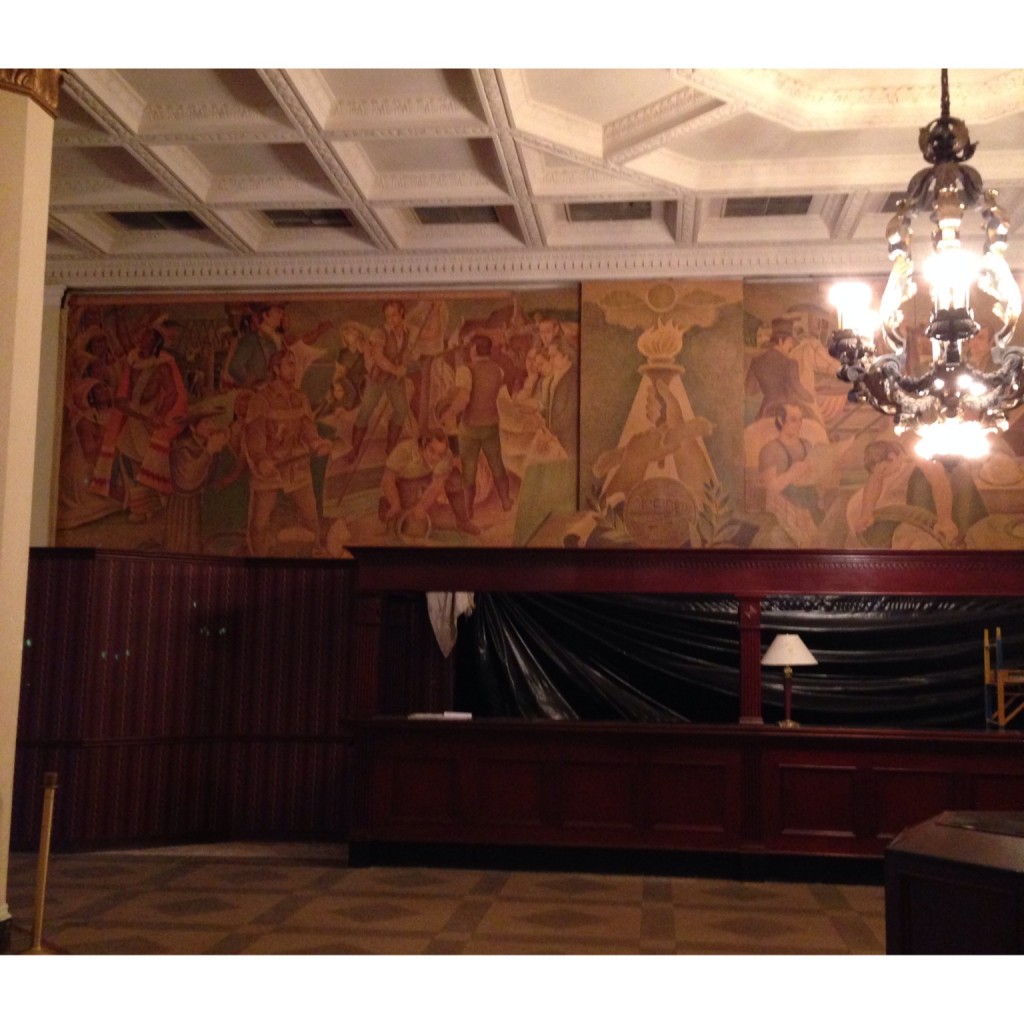 A 40-foot by 10-foot mural, painted by Carl Roters

Speaking of the lobby – it has an open setup and jaw dropping beauty. The windows, which currently are blocked by boards, will be opened to allow natural light to flow in. Over the top of the front desk, the 40-foot by 10-foot mural, painted by Carl Roters, will once again depict aspects of Syracuse’s national history to guests.

When the American society and economy blossomed and “roared” in the 1920’s, Syracuse found the opportunity to finance and build this grand hotel, which opened in August of 1924. George B. Post & Sons, which was the architectural firm behind the Statler Hotels chain (i.e. Waldorf Astoria) took on the project. According to the historical interpreter playing the Ghost of the General Manager, the hotel was financed by stocks and shareholders of local businessmen. About one-and-a-half million in shares went toward the approximate $4 million needed to build the 14-story, 600-room hotel. 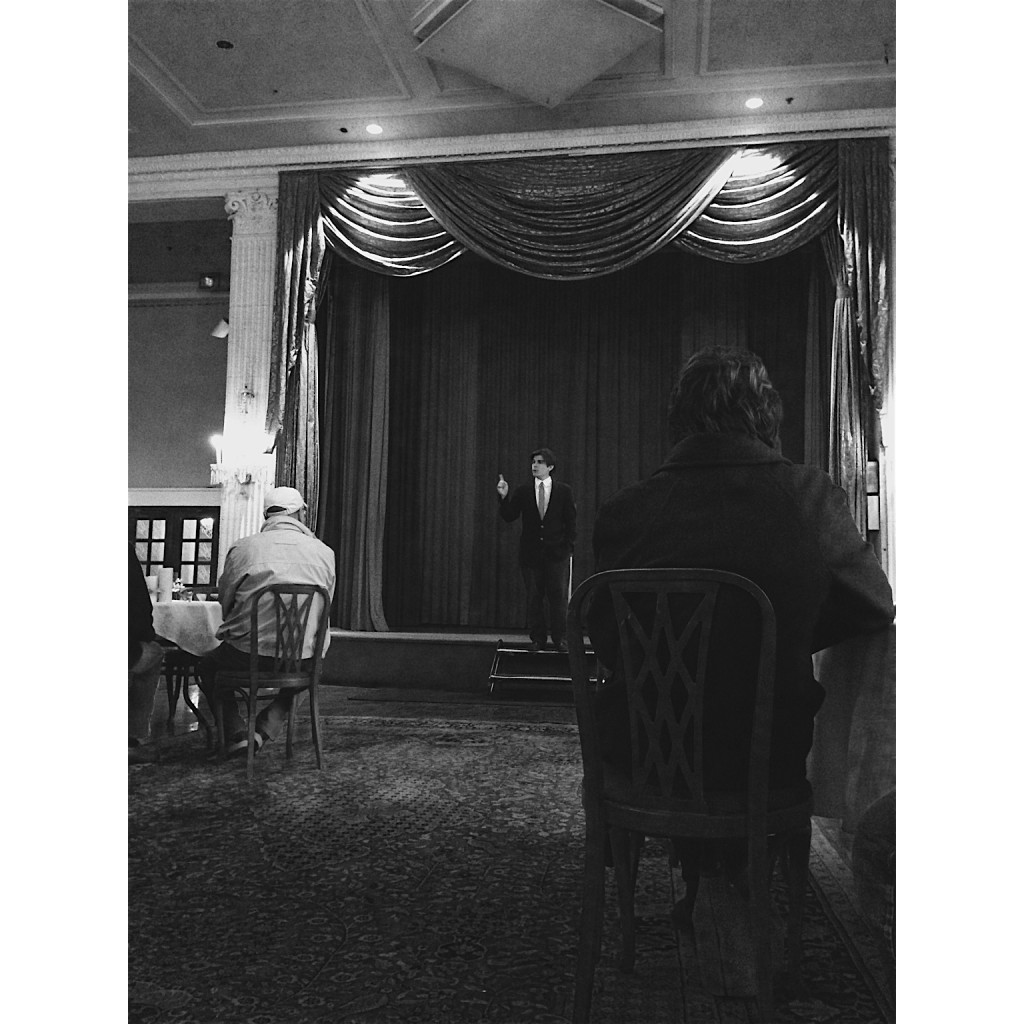 Historical interpreters played ghosts of the hotel past during the Onondaga Historical Association tours of Hotel Syracuse.

“It was the largest hotel between Buffalo and Syracuse,” the ghost said.

As the Great Depression hit in the 1930s, The Hotel Syracuse would experience a roller coaster of refinancing; when Hancock International Airport opened and the population of hotels grew to accommodate travelers, competition took its toll.

The Hotel Syracuse still became an essential part of the community.

Surrounding companies such as Penfield, the Hueber brothers, Onondaga Pottery (Syracuse China) and Iroquois China, Edward Joy, and The Edwards Store all participated and contributed to the essentials for the hotel. When the Grand Ballroom, the Persian Terrance, Rainbow Lounge (post-Prohibition), and Cavalier Restaurant were thriving, all of the places were open to the public and not just visitors. The Persian Terrace was the home and venue for fashion shows and live Big Band performances, which — courtesy of WSYR — were broadcast across the airwaves.

And, yes, the hotel had its share of celebrity visitors. As the stories go, Red Skeleton would “sit and watch people, drawing and creating caricatures from hotel guests.” Benny Goodman, Glen Miller, and Perry Como played a few tunes as well as Frank Sinatra, who at a young age was caught sliding down the banister toward Onondaga Avenue. The cafe was once designated as The Library, a “library discotheque,”  and evolved into Wise Guys Comedy Club in the hotel’s latter days.  Bob Hope graced the stage in the cafe as well, and the venue was a place where John Lennon and Yoko Ono … and Ringo Starr … all visited for Yoko Ono’s art opening at the Everson Museum (and to celebrate Lennon’s 30th birthday). 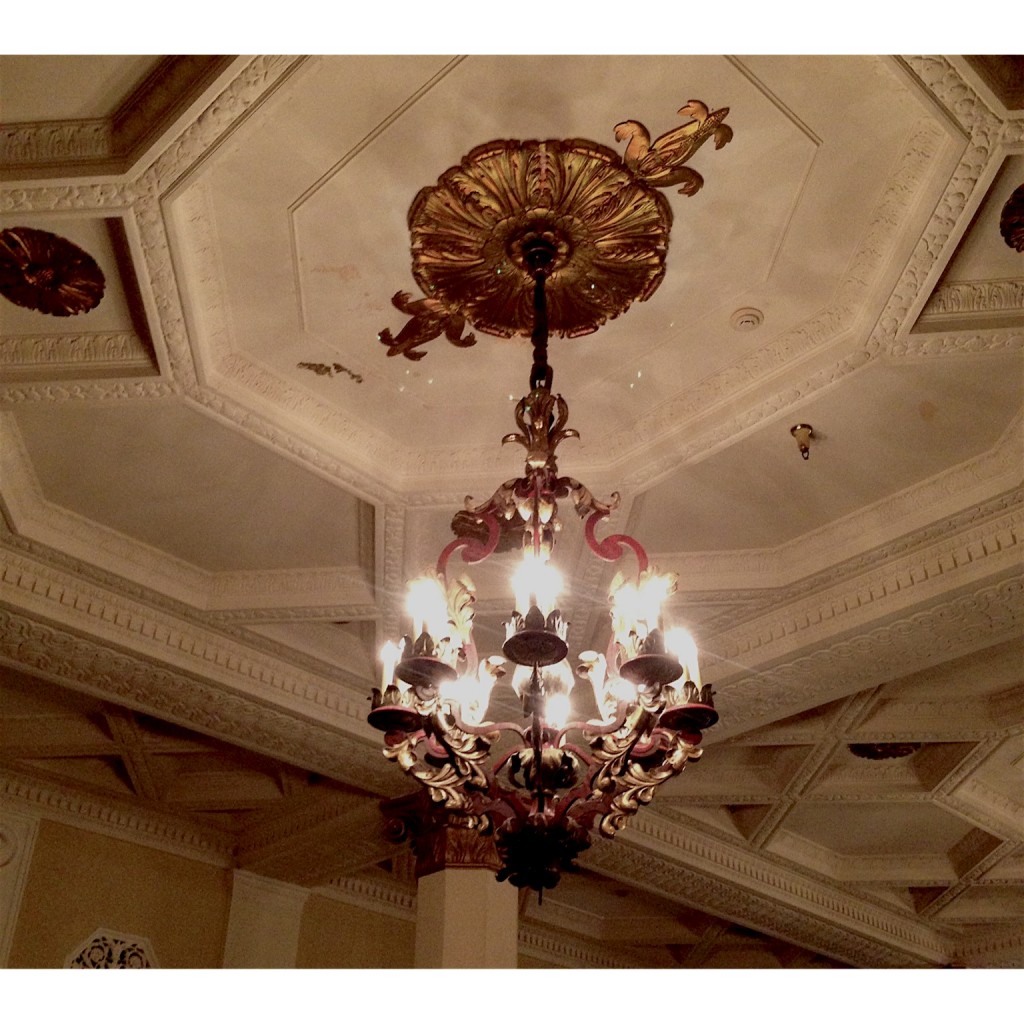 “I assisted Scott Peale, the OHA Director of Education, in coordinating guides. The best part of this experience is collaborating with OHA to bring locals through one of the most historic buildings in our city and educate them by weaving nostalgia with modern facts around this and our city’s history.” he mentioned.

As he gives tours himself through NoExcuses, Heagerty told me that his upcoming New Times #TakeATour video blog will focus its lens on the hotel.

Jon Zella, who works development for the OHA, was pleased with the turnout as well. “The tours are packed, and we’ve sold out this weekend,” he told me as well. “We may have tickets for next week’s tour, but I’m not certain. They’re definitely going fast.  However, we have a lot more events happening in the near future.”

Tickets for the next Hotel Syracuse Suite Stories Ghostwalk, which is January 3, 2015, can be found through Eventbrite. The tours are taking place every 15 minutes, from 1 PM to 3:30 PM …

… but all of the tours are currently sold out.

The Onondaga Historical Association gives tours and holds events throughout the year. The next is “An Accommodating Legacy: The History of Hotels in Downtown Syracuse.” It will take place on February 15, 2015, in the OHA Museum at 321 Montgomery Street in Downtown Syracuse. It is free and open to the public.

NoExcuses, gives several tours throughout the year, and information can be found at the website.