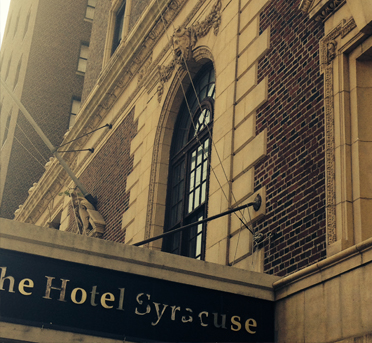 There is uncertainty with the sudden infatuation with The Hotel Syracuse. There is no personal attachment to it, but the familiarity that seems to be lingering in the background begs to differ. There is a history behind those walls. There is an elegance that no one will be able to understand.

And this is fine.

But perhaps I should invest in an office for my own. Perhaps an inquiry about a tour before the renovation and then one after it. Hotels are places of inspiration to us writers. Each room has a story that needs unlocking.

Returning to the Hotel

It is uncertain on what captures the eye first with the grand hotel. Is it the brick edifice? Could it be the windows? Could it be the grotesques sitting atop of the building? The intrigue that could lie behind those walls? It’s the whole package, in my opinion.

Architecture is captivating. Along with this comes an obsession with doors and windows, cathedrals, and cemeteries. However, this education was never a part of the whole schooling process.  Like any regular person in search of information, good ol’ Google was relied on. Let’s start at the top with the gargoyles, which are, in fact, grotesques.  Gargoyles, a form of grotesques, are the statues of animals or people or creatures that protrude off buildings; they are carved and/or have holes in their mouths to channel the water away from buildings to prevent erosion. Chimeras, in architecture, are simply faces that are stationed on building walls for decorative pieces. In the mythological sense, chimeras are creatures that blend a variety of animals and human characteristics in to one beast. 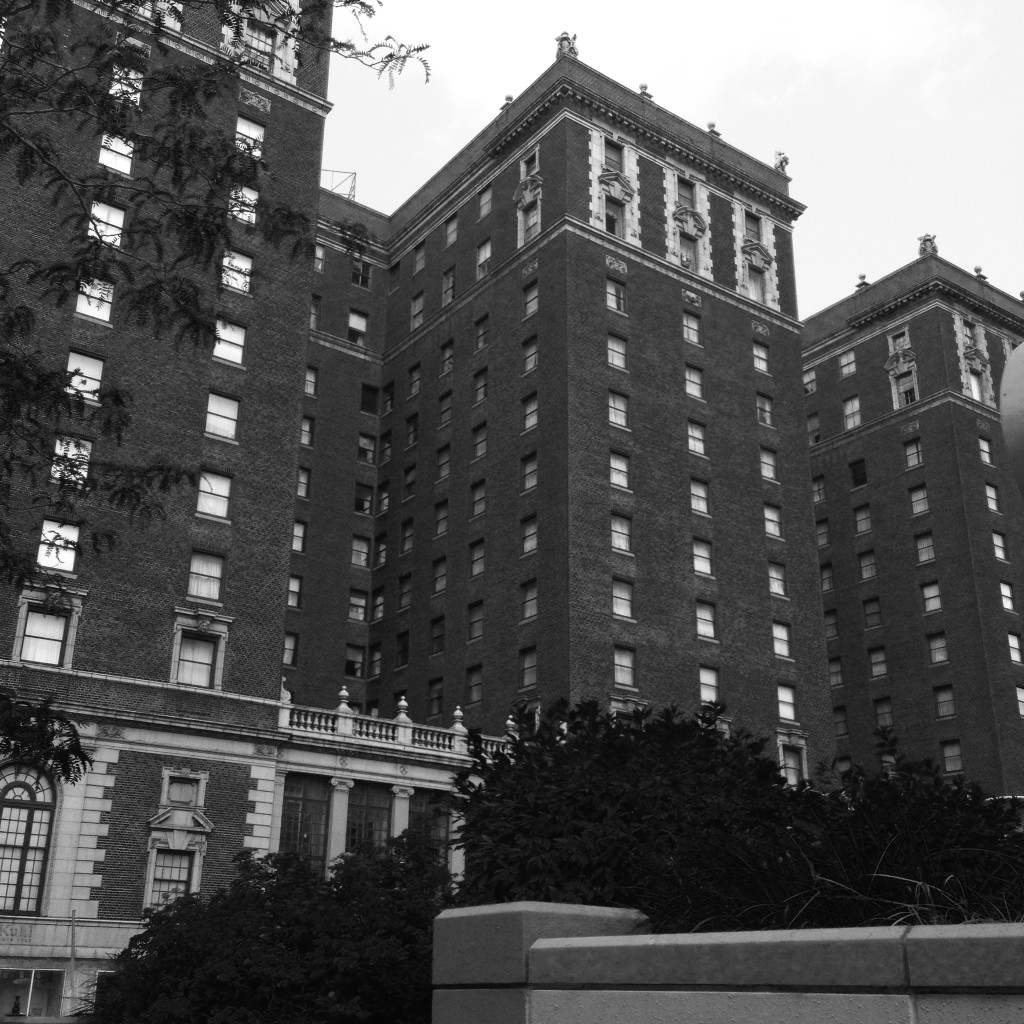 The chimera directly above the Warren Street entrance is humbling rather than demeaning or intimidating. Well, it’s intimidating as well, but that pertains with the onlooker dealing and being honest with themselves. The purpose of such stone facets is to intimidate and scare away threatening notions of any sort. However, let’s be honest, if there was to be an evil entity it probably would or could enter at any moment. After all, humans are the beings that infiltrate such places, and we’re a pretty dreadful species. Let’s face it, we’re all sinners. We may not know exactly what went on behind those walls of the hotel, but we have an idea, and dare these should be listed:

I personally love waking up in a hotel, hostel, bed and breakfast in another place in or outside Syracuse. It’s fun to wake up early and look out a window into unfamiliar territory. As to who else looked out those windows, you wonder. What they were doing here. What romance sparked. What were those parties like in the ballroom.

Let it be known that what is to be said is still greatly considered during my time here in Central New York. When looking out the window, there is this strange connection that greets you. The morning, the location welcomes you. It teases you: this is a wonderful place and view to wake up to, regardless the reason — positive or negative — why you are here, and you could experience it more. The walls, rooms contain stories. With stories come energy. That energy can manifest itself as ghosts, if they don’t roam already. It would be nice, as a CNY resident, to wake up in one of the rooms from an overnight stay just to see how the city morning greets one.

It’s a call to adventure. 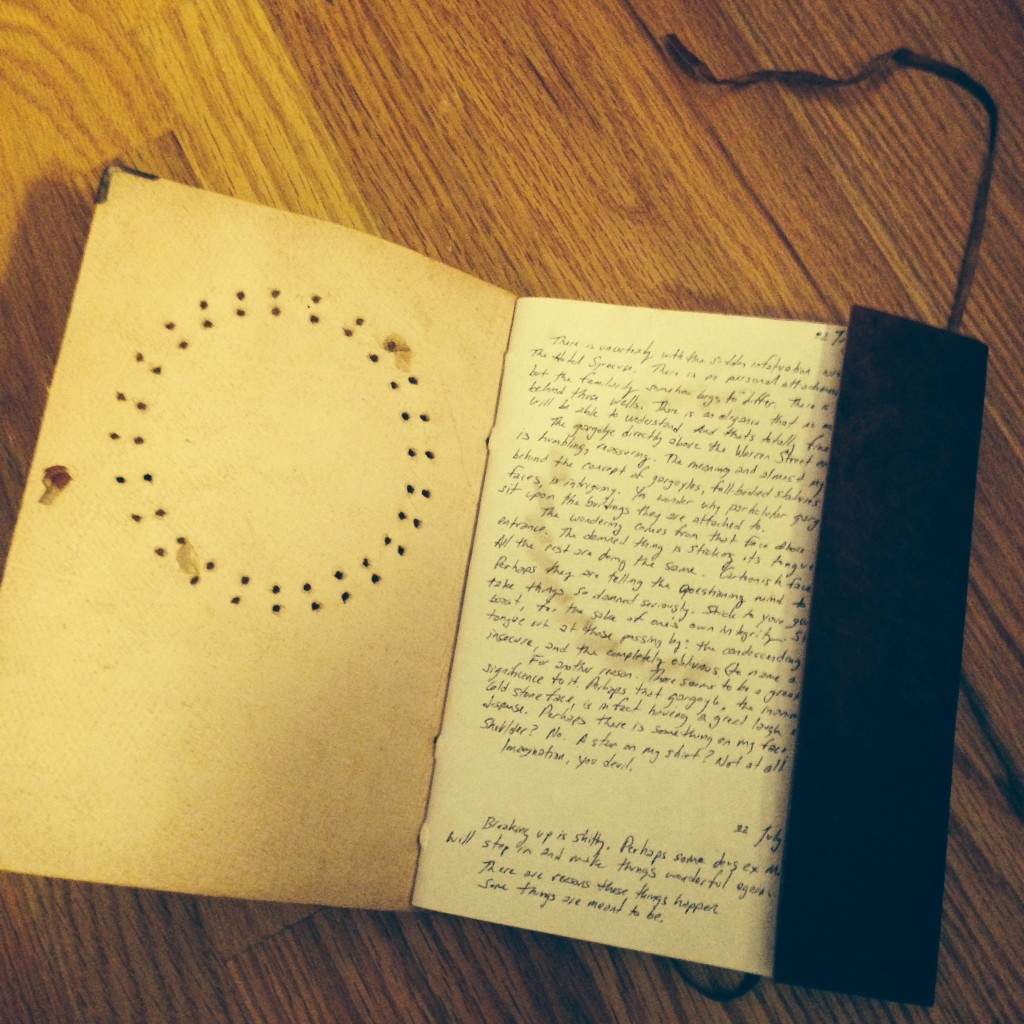 Returning to the chimera, well all of them. They’re all sticking their tongues out. The wondering comes from that one particular face above the entrance. Usually, or sometimes, your gaze will focus upward. That tongue sticking out is the last thing you would see before entering the building. Perhaps this is what a child’s curiosity would allow them to notice as their business-minded parents head to the front desk. The next time the family were to be out and about, the child would take notice to the rest of the chimeras with not-so-serious grimaces.

Perhaps these grimaces are telling the questioning mind to not take things so damned seriously. Stick to your guns, they say, for the sake of your own integrity. Stick your tongue out, they continue saying, at those passing by: the condescending, the insecure, and the completely oblivious just to name a few.

For another reason, there seems to be a greater significance. Perhaps that chimera is having a great laugh at your expense. They’re laughing all right. At you? Me? Is there something on my face? No. Is something looming over my shoulder? Nope. Is there a stain on my shirt? Not at all.