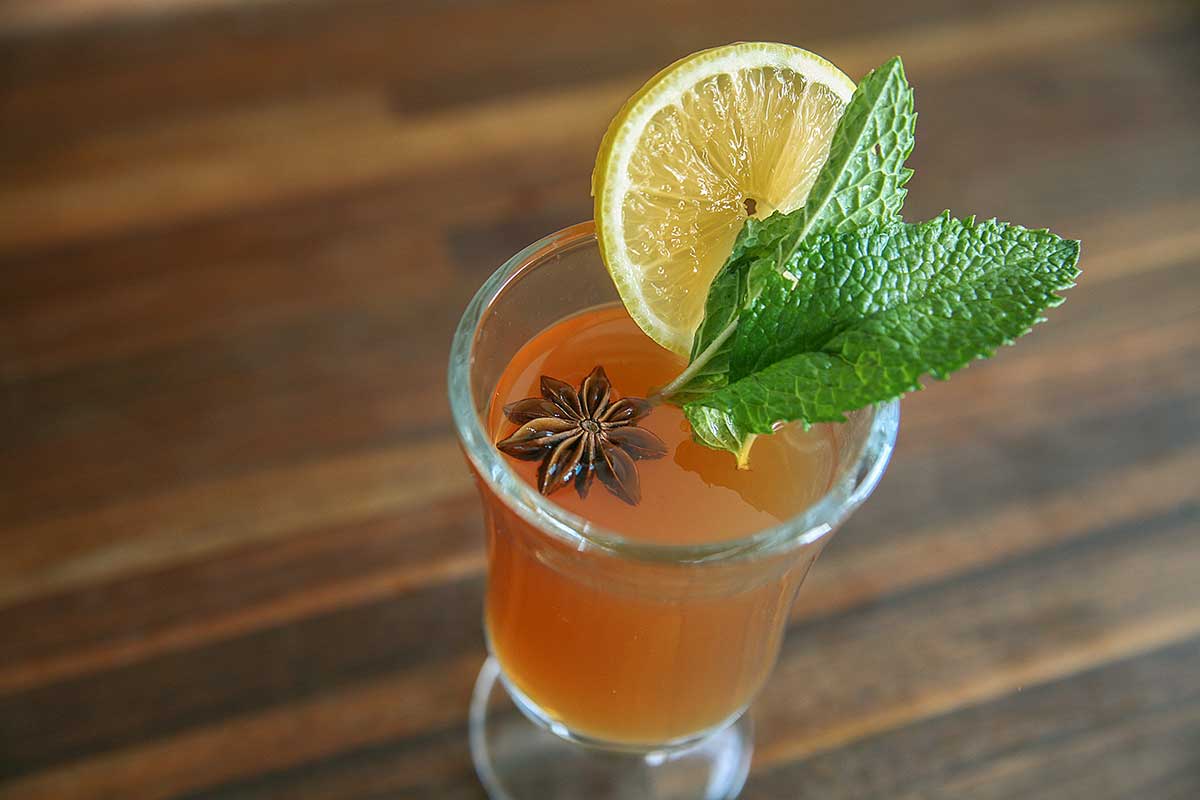 Hot toddy is the general term used to describe a mixed drink that is served warm or hot. The hot toddy is said to have originated in Scotland or Ireland, both noted for dreary, cold and wet weather.

At its most basic, a hot toddy is made with bourbon, honey, lemon and hot water and enjoyed before bed. Some people mix these ingredients up when they are fighting a cold. Others use them to fight winter.

We live in apple country, and lots of places around here offer adult drinks based on fortified apple cider. The Cider Mill restaurant in Taunton, for example, has a drink called the Cider Mull on its cocktail menu. It’s made with Beak and Skiff sweet cider, mulled in-house with honey, lemon, cinnamon and cloves, and topped off with maple syrup and 1911 Established barrel-aged bourbon. The Cider Mull does double duty as both an after-dinner drink and dessert.

The 1911 Spirits bourbon isn’t made with apples, but the LaFayette-based distiller also offers an apple brandy that’s tailor-made for hot toddy creativity. Prior to its closing just before Christmas, the tavern at the Beak & Skiff Apple Hill campus offered several seasonal cocktails, including the Hot Apple Bourbon Toddy, made with warm apple cider, 1911 bourbon, fresh apple and cinnamon.

Speaking of 1911 Established: How about a hot version of 1911’s cold, milkshake-like cocktail enjoyed by many this summer at the New York State Fair? The Tipsy Cow is sweet and slightly boozy, made with 1911 Cold Brew Coffee Vodka, Byrne Dairy chocolate milk and Recess Coffee, topped with whipped cream and a drizzle of chocolate. Heat the coffee and chocolate milk, add a couple glugs of coffee vodka and serve in a warm mug. Whipped cream is recommended.

When Chris and Katharine Johnson of the local food and beverage focused Instagram account We Eat CNY hosted a holiday cocktail class at Citronelle in Armory Square last month, bartender Sam Ehrenreich showed participants how to make his version of Hot Buttered Rum. The drink is not on the restaurant’s menu but a recipe for it is on page 17.

Mulled wine doesn’t show up on a lot of tavern menus, but it has its fans. Many of the wineries in the Finger Lakes sell packages of mulling spices to be used with the red wines of the region, but you can put together your own blend.

Combine one bottle of fruity red wine, one orange (cut in wedges), one lemon (cut in wedges; optional), one or two star anise (broken in pieces), two cinnamon sticks, one teaspoon each whole cloves and allspice and some freshly grated nutmeg in a pan on the stove or in a slow cooker, set to low. Heat the mixture, but don’t let it boil. Taste and add some water and a couple teaspoons of brown sugar, if you like. Serve in heated mugs.

Rare is the local restaurant or tavern that doesn’t offer Irish coffee — or its own twist on the classic hot drink. Laci’s Tapas Bar in Syracuse has on its menu the Hot Irish Kiss, made with coffee and a boozy trifecta: Jameson’s Irish whiskey, amaretto and Frangelico (hazelnut liqueur).

The Stoop Kitchen, in Armory Square, offers both traditional Irish coffee and what it calls Stoop Coffee, made with coffee, Jamaican rum, Gran Gala (orange liqueur), coffee liqueur, brown sugar and cream. With or without alcohol, the Stoop’s coffee of choice is Forty Weight Coffee Roasters, based near Ithaca. The Stoop also offers a Scotch Chocolate, made with steamed hot chocolate and Monkey Shoulder scotch, topped with a toasted marshmallow.

Meanwhile, wrap your hands around a warm one (or two) at Kitty Hoynes Irish Pub and Restaurant, 301 W. Fayette St., during its annual Irish Coffee Fest, Monday, Jan. 21, to Saturday, Jan. 26. A highlight of the weeklong fest is Irish Coffee Day, which falls on Friday, Jan. 25. Kitty Hoynes makes its Irish coffee with Café Kubal coffee and Tullamore Dew whiskey (but you can sub Jameson’s, if you like).

Circling back to the basic hot toddy: Aaron Carvell, a partner in the family-owned Old Home Distillers (Madison County), says they have several hot toddy recipes to take the chill off this time of year. Mother’s Hot Toddy is made with their Brothers’ Cut Bourbon Whiskey, which is available at Vinomania, Liquor World and other Syracuse-area liquor stores, as well as in the A Shed at the Central New York Regional Market, where Old Home sets up each Saturday.

Add whiskey, honey and lemon juice to a mug. Top with hot water. Add lemon wedge and ginger and stir well. Allow to steep for a few minutes.

To serve: Stir water and spiced butter batter together in a mug or glass until batter is diluted. Add rum and stir. Top with a piece of frozen butter. Garnish with a cinnamon stick. Makes 16 servings.