There are bad bosses, no doubt.

There are bad employees, no arguing.

There are friends who come up with ideas you could do without.

I picked this comedy sequel for an early Saturday afternoon matinee at the Regal chain in Shoppingtown without having seen the original because, well, the opening-this-weekend pickings were mighty slim. I didn’t wish to be scared out of my wits or watch folks chasing around the desert, frankly, so I bypassed The Pyramid and went for the yucks of this one in its second week of release. I had little fear that the plot would leave me behind. Besides, Jason Bateman had won me over this year as the sensible sibling in This Is Where You Leave Me.

Directed and co-written by Sean Anders, with co-writing credits to John Morris, Horrible Bosses 2 was all I expected and more.

It was silly. It was crass. It was sophomoric. It was dirty. OK, it was funny. I admit it. 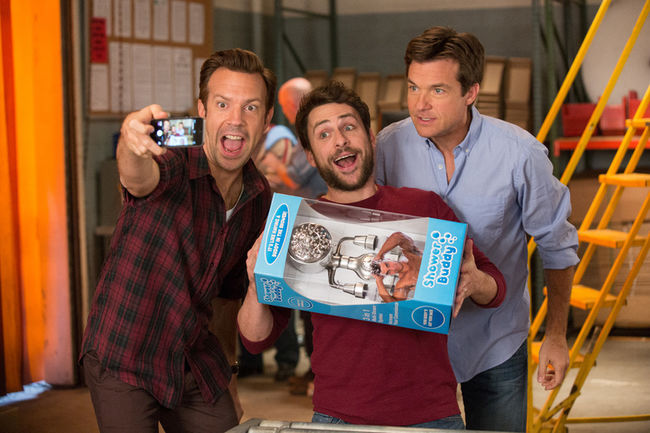 Bateman again is the sensible guy in this crew, his Nick Hendricks saddled with trying to funnel the creative juices of Kurt Buckman and Dale Arbus, again played by Jason Sudekis and Charlie Day. That’s not so easy. It’s apparent that they’re recovering from capers that separated them from their employment and former bad bosses of the first film, and this freedom of time and pressing need for cash has resulted in an invention by the three called The Shower Buddy.

We find them pitching their product on a morning TV show.

They can’t agree on much on camera, and the show’s co-hosts are alternately amused and aghast at their genius and stupidity.

The slapstick and sight gags and wordplay are all eye-openers. Oh, so this is how it’s going to be, I thought. I’m glad my dear wife Karen isn’t easily offended. I also looked around to see if there were any African Americans in the crowd of 30 or so folks who might be truly annoyed at that racist as the black anchorman puts their three first names together to promote their website. I didn’t sense anything.

The three schmoes on screen apologized profusely for the ignorant name combo. But the overgrown frat boy humor got even worse, and Jennifer Anniston as a dentist unsuccessfully running a 12-step group for sex addiction played a huge role in all of that.

But the laughs came from plenty of places, including the star trio’s gigantic lack of business acumen that leads to a crazy and crazed kidnapping caper. Chris Pine and Christoph Waltz as son-and-father business partners Rex and Burt Hanson both dazzle as young and old double-crossers with a big love of the almighty dollar, and Jamie Foxx as employee “MF” Jones and Kevin Spacey as jailed former boss Dave Harken provide interesting takes on law and order.

Yet it’s the constant interplay between Bateman, Sudekis and Day that rules the screen in every scene. Horrible Bosses 2 is a buddy-buddy-buddy film at its core. Even as they belittle, bewilder and bemoan each other, they do it with love.

Me, You, Brew and View: The Espresso Shot (#031)
Fictional Thievery May Benefit Vera House
To Top