Skycron’s ‘The Undersigned’ looks to give back

Syracuse, Ottawa, MacGyver and Alias intersect with the Vera House in The Undersigned. The pilot episode, currently being filmed in Syracuse and Ottawa, also has a Kickstarter campaign seeking $10,000 to film the next two episodes.

The three leads are women who struggle with homelessness and steal money to survive. A cop notices their talent, and offers them a job to steal stolen money back from criminals.

The show opens in Ottawa but quickly moves to Syracuse. Two of the main characters, Cyan and Sam, are from Syracuse. The three women meet in Ottawa, where Syracuse police officers are collaborating with the Royal Canadian Mounted Police.

Cory Carlick — the show’s creator and the chief creative officer of Skycron, the production company — chose Syracuse because it is a border town with a similar atmosphere to Ottawa.

“I don’t want too much of a culture shock,” Carlick said, “Ottawa and Syracuse are similar in terms of population and culture, including a push to develop the arts community. … The Ottawa-Syracuse connection makes sense and offers a good frame of reference.”

An open call audition will be held for a few characters that haven’t yet been cast, including Shaquoia Ramirez, a crime reporter in Syracuse.

The show combines swashbuckling with a social conscience. The three protagonists leave money around Syracuse, anonymously signing “The Undersigned” on the letters they leave with money.

Carlick decided to name the show “The Undersigned” because giving back was a large part of the show.

“It’s one of the main plot points,” Carlick said, “When they complete assignments, they leave money anonymously. They just sign as The Undersigned.” 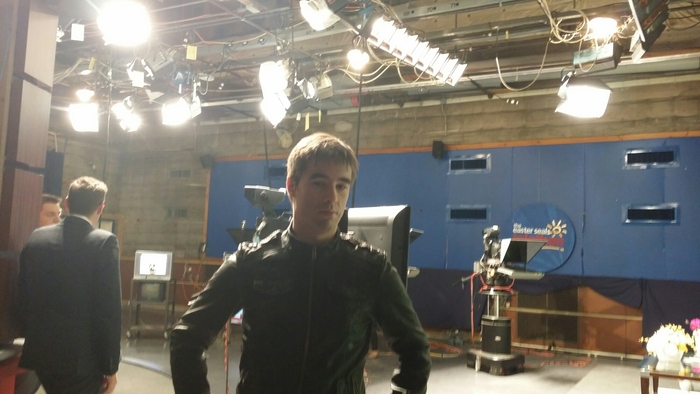 Cory Carlick at the CKWS-TV television studios in Kingston

According to Carlick, the element of giving back makes the protagonists more human and the show more dynamic.

“One of the things that makes this attractive is the two elements that don’t seem to work together, swashbuckling on the one hand and on the other hand these women are trying to help people,” Carlick said, “They fight and find a way to fix. They are professional butt kickers but human enough to do something nice. Three people who fight tooth and nail, and this is their way of giving something back”

Domestic abuse resonates with Carlick, who spent many years as a volunteer in crisis intervention and had a close friend abused by her boyfriend.

“I got a call very late in the night,” Carlick said, “I was one of the first to see her, and I went to the police with her. Seeing my proud successful friend reduced to banging on the door at 2 a.m., that really sat with me. That was the main thrust.”

The Kickstarter campaign to raise money for the next two episodes can be accessed HERE.