Power, seduction and bad movies are the ingredients for SU Drama’s Speed-the-Plow

Satires about the Hollywood movie industry have been around about as long as Hollywood itself, and chances are that you already know the drill. The plot will involve Tinseltown types in search of the next big deal that will make box-office mega-millions, until the eternal struggle between art (as in art-house features that nobody wants to see) vs. commerce rears its ugly head. Playwright David Mamet drew from this thematic well in 1988’s Speed-the-Plow, a caustic three-character comedy that is performed by students of the Syracuse University Drama Department through Saturday, March 1.

Here’s the pitch, which involves Bobby Gould (played by Alex Thompson) as the newly anointed head of production at a Los Angeles studio. Bobby’s chair is barely warm (his office is in mid-makeover, as paint cans are strewn about) when in comes his old pal Charlie Fox (Tyler Wiseman) with a tempting package deal: a high-concept “prison buddy” project with a major director attached. “I could have gone across the street” to another studio, Charlie mentions several times, but he proffers nothing but loyalty to good ol’ Bobby, his executive colleague of 11 years.

As the pair envisions rolling in greenbacks and their names above the movie’s title, however, audiences will note that scenic designer Alex Petersen’s set also features the third player on the left side of the stage. A back-lighted silhouetted figure is seen typing, answering phones and occasionally primping herself while seated in a desk chair. That character will eventually emerge as Karen (Hannah Daly), a comely secretarial temp perched atop red high heels who struts into Gould’s office and impresses the men with her physical attributes.

The guys are taken aback by Karen’s plainspoken manner, however. While in macho guy-speak that brims with insincere bromides, the self-admitted whores cite that today’s movie productions are unworthy, to which Karen responds, “Why is it all garbage?” Charlie also deadpans that Bobby likes his coffee the same way he likes his movies: “Nothing in it.” 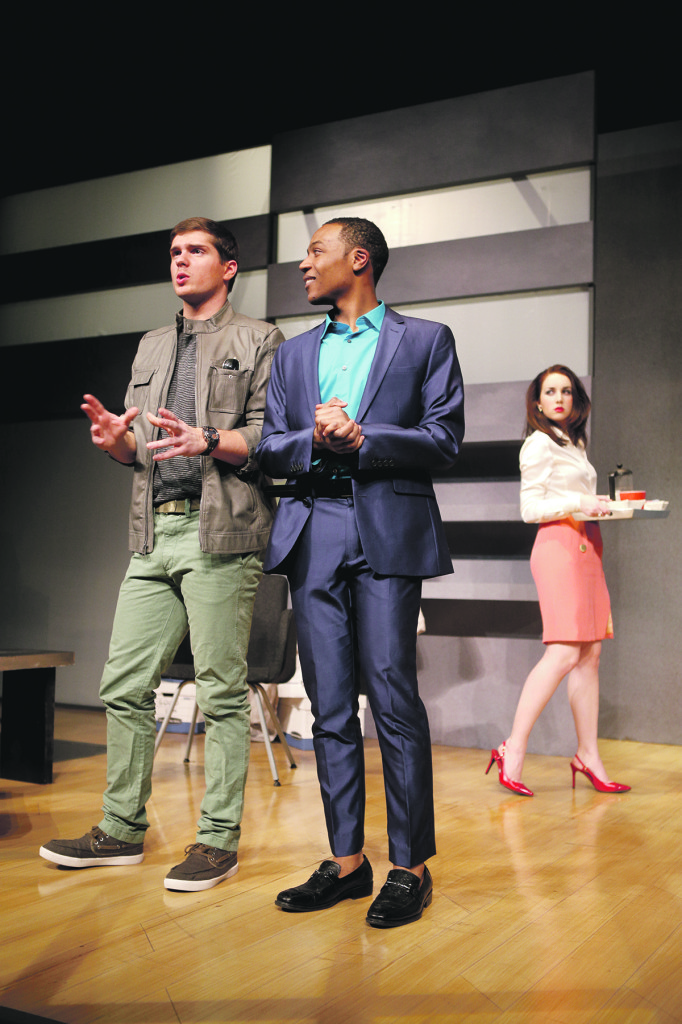 Boys being boys, Charlie makes a wager that Bobby will be unable to seduce Karen that night. But Bobby has his cagey ways: He instructs Karen to perform a “courtesy read” on a pretentious book about radiation and the end of the world penned by someone Bobby disdains as an “Eastern sissy writer.” Bobby knows a movie adaptation wouldn’t make dime one at the box office, yet by inviting Karen to his posh pad for a book report could lead to his winning the bet. Yet Karen turns out to be anything but a naïve innocent in the Tinseltown whirl.

Mamet’s droll vision of show-biz loyalty is punctuated with a ferocious, rat-a-tat wit, mostly coming from Charlie’s cynical perspective. A gag about drug abuse concerns Charlie’s remark that Bobby’s office should be decorated “in the color of the broken capillaries in his nose.” Regarding the radiation book, Charlie snidely chirps, “Yeah, it’s a summer picture,” and later declares, “I believe in the yellow pages, Bob, but I don’t want to film it.” Yet actor Tyler Wiseman also captures Charlie’s desperation when Bobby has second thoughts about the package deal Wiseman delivers the Mamet-styled dialogue blasts with a sweaty bravura, especially Charlie’s pivotal line, “They {upper studio heads} will not understand what you did what you did!”

Hannah Daly also has her moments as Karen, the role that led to Madonna’s Broadway acting debut in 1988. Karen’s power move comes late in the play’s action (“It’s about fear,” she tells Bobby about the radiation book, expertly preying upon his apprehensions as well), yet Daly’s performance keeps those plot maneuvers in secret during the earlier moments of her ambiguous turn– at least until the tables-turning scene at Bobby’s apartment. By the way, scenic designer Petersen’s concept of the exec’s pad is all decked out in plushy red, particularly with a high-rise window view of LA’s streets (Bobby seems to be residing atop the Capitol Records building). That scene also opens with spotlights gleaming on Bobby’s floorboards, forming a neatly satiric touch.

The Bobby Gould character is on stage for nearly every minute of the action, which gives Alex Thompson a mighty big role to inhabit. The actor opts for surface-level slickness, however, without the type of sleazy energy that would be essential for a wanna-be movie mogul’s rise to the top. Director Rob Bundy must shoulder some responsibility: He succeeds on a purely technical level, ensuring that Mamet’s overlapping cadences hurtle at a fast clip, yet the results are less than engaging, let alone raucously funny, in their emotional context.

At least the timing of SU Drama’s revival of the corrosive, anti-Hollywood Speed-the-Plow couldn’t be more apt, especially so close to the annual self-congratulatory ceremony known as the Academy Awards.

Going Bananas in the Big Apple
China Syndrome
To Top