David Henry Hwang was still a kid-playwright when he burst upon the scene with his Tony-winning M. Butterfly 25 years ago. Taking Puccini’s Madame Butterfly as a template, it was a deeply serious work about Western misperception and exploitation, with echoes of the dreadful experience in Vietnam. Since then both the times and the playwright have changed. China has become an economic behemoth, allowing Hwang to unleash his madcap inner muse.

His Chinglish, through March 16 at Syracuse Stage, still addresses Big Issues, but its brilliant surface is flat-out hilarious. You could call Hwang a smiling Eugene Ionesco or an Americanized Michael Frayn. But he’s more direct than that. The late Sid Caesar, master of linguistic chaos, would have been proud to be a part of this show.

Hwang begins with familiar material: laughably mistranslated public signs in China. Everyone with an email account has had pictures of these forwarded, along with the cat videos: “Take notice of safe; the slippery are very crafty.” Hwang begins to win  your confidence by applying a fundamental principle of live theater to transform this dross into gold.

The lines are wonderfully ratcheted up when delivered by skilled performers and then, with the right delay, extended above in projected surtitles (more than 700). It’s a device the audience does not get tired of. Indeed, when it’s absent we miss it. And when Hwang reintroduces it he has upped the ante to more intimate misunderstandings.

The Westerner who enters the Middle Kingdom here is, yes, a signage salesman, who wants to tackle the problem with American know-how. Action begins when Daniel Cavanaugh (Peter O’Connor) is addressing a business association in Ohio recalling events that happened three years ago. His attitude is ironic rather than boastful, and we sense that his tale is to some degree cautionary. China represents an opportunity, but it won’t come easily. More than a billion former Communists are now consumers.

To ensure success, Cavanaugh advises, you must have your own translator. It’s why he has hired slightly shabby, British, unemployed teacher Jeff Locker (Peter Timms), a fanatic Sinophile who speaks fluent Mandarin. 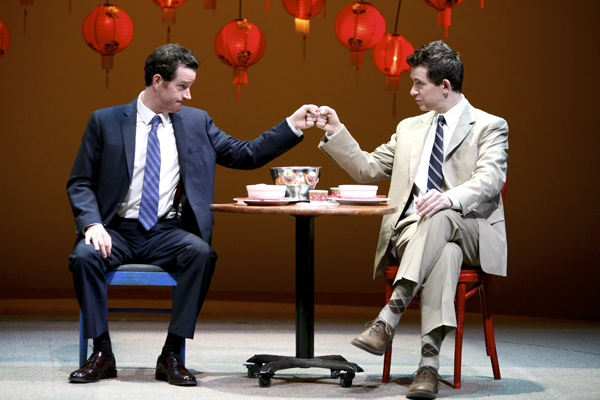 Cavanaugh and Locker bring their signage to a committee in a sleek business office that would pass stylish muster in Manhattan or San Francisco. Audiences that cheer beautiful furniture on well-planned sets will be much pleased with what scenic designer Timothy R. Mackabee has delivered for this co-production with Portland Center Stage.

Hwang’s comedy is composed of dozens of short scenes, almost like a movie. Couches, tables and walls fly about instantly and soundlessly on the revolving set between scenes. Along with being ingenious eye candy, the set also speaks. The quality of the surroundings rises as we move among players of higher station.

The committee Cavanaugh and Locker are approaching speak for the fictional metropolis of Guiyang. It’s fairly small, “only 4 million,” and lies in the Chinese equivalent of the Midwest. Hwang’s conception of the committee, the people who run China in the era of successful state capitalism, is a departure from the plethora of types and stereotypes that old Hollywood supporting players Keye Luke and Anna Mae Wong used to make their livings by imitating. These Chinese look stylish and confident in Jeff Cone’s costumes. They hold the stronger hand, in part because Cavanaugh comes from a debtor nation. We might be meeting new figures but they are fairly sympathetic.

The top male, Minister Cai Guoliang (Jian Xin), mocks Chinese acrobats and is constantly harassed by his unseen wife and a company of relatives. Cai is also given to bluster, and both Cavanaugh and the audience are drawn more to another member of the committee: a woman.

Diminutive Xi Yan (Tina Chilip) might be the shortest person in the scene, and she barely speaks initially, but our eyes keep going to where she sits. It took a female director, May Adrales, to hone the character into this fusion of wily allure and dangerous threat. If the minister of culture (whatever that implies in authority) had been played by a taller or more buxom woman, much of the excitement here would have been dissipated. Xi Yan wears high spiked heels, the likes of which would be uncommon in an American office.

As she has sent no blustery messages, Cavanaugh finds her approachable when they speak away from the meeting. When she appears to give him an opening he makes a pass, and she slaps him. Not long after that they are in bed together.

As Cavanaugh and Xi Yan can barely speak to each other, Hwang’s comic device finds new resonance. His attempt to say “I love you” in Mandarin comes out as “My fifth aunt.” That reliable comic device is more clearly a springboard to serious questions now. Locker and Cavanaugh have agreed that although China is an authoritarian society, it is not always a society of laws. Both bedmates are married, and how are they to treat their betrayed partners? And more importantly, which side is benefiting from this adultery?

Playwright Hwang, a Chinese American who speaks no Mandarin, has slightly more fun at the expense of the Chinese than the Westerners. They cannot understand where Cleveland (Cavanaugh’s home base) is unless it can be related to Chicago, the one American city they know. In their celebrity-centered tabloid view of American affairs, they become fascinated with Cavanaugh when he is linked with infamous financial scandals, the peak comic ensemble scene.

There’s never a false note from any player. Peter O’Connor might be a naïf abroad, but he’s wise enough to learn from his missteps. Tina Chilip’s Xi Yan is the Asian equivalent of a Hitchcock blonde: beauty fused with malevolence. Jeff Locker’s ambiguity as the Englishman Peter Timms makes him feel like a character out of Graham Greene. His command of spoken Mandarin makes him the indispensable man. As the hapless translator Miss Qian, Rachel Lu is the best comedienne in the cast. Jian Xin travels the longest dramatic arc, when Minister Cai suffers a reversal not revealed here. Lily Tung Crystal and Yuekun Wu in dual roles strike telling tones and important moments.

Chinglish hardly feels like a work from the man who wrote M. Butterfly. Hwang’s provocative insights and manic hilarity argue that the playwright has adapted to the transformed East-West equation better than any of his characters have.