Although Samuel de Champlain could hardly have imagined his likeness on a movie screen or his bio on the Internet, the keystone-shaped historic marker in the middle of Cazenovia might have proved even more enigmatic. “To Site of Champlain Battle,” it promises at the junction of Route 20 and Fenner Road,“1615.” As it turns out, it’s a double-edged case of “you can’t get there from here.”

This much we know for sure. Samuel de Champlain, the French empire builder, founded New France at Quebec in 1608, befriended the local Huron and Algonquin natives and supported them using his arquebuses (primitive muskets) in a fight with the Iroquois near Lake Champlain in 1609. In October 1615 he marched down from Canada with nine or 10 other Frenchmen and 300 of his Indian allies and laid siege to an Iroquois village somewhere in Central New York. Although Champlain left records of this misadventure — his fight ended unsuccessfully after six days — determining the location of that event has proven to be a battle of its own.

Nichols Pond Park, tucked into the lofty wind-scoured highlands of rural Fenner, lives among sprawling dairy farms, towering wind turbines that arc into the sky with airfoil blades that reach 329 feet, and a stubborn, maligned sense of history that won’t go away. The historic marker in Cazenovia points in the direction of this Madison County park, but since two other similar signs along the way have long since disappeared, you will need your GPS to find the place, at 5797 Nichols Pond Road. Even then your search for Champlain’s attack will, in all likelihood, remain unresolved.

The connection between this diminutive lea, which has been recognized as an early Oneida habitation site since the early 1800s, and the Champlain battle site, was originally fostered by John S. Clark of Auburn. Clark, a historian and Civil War general, visited the site, compared what he saw with the documentation left behind by Champlain — a journal, a map of his expedition, and a sketch of the battle — and drew his own conclusions. Supported by the stentorian Cazenovian Lambertus W. Ledyard, who published his own treatment of the subject in 1883, and others, Clark declared, in Syracuse in 1877, “I identify the site as certainly as any gentleman present can identify his wife at the breakfast table after 10 years of married life.”

Clark’s self-assured proclamation went unchallenged long enough to attract a horde of supporters, including the New York State Highway Department, which erected the historic markers, all accepting Clark’s hypothesis without proof, in Cazenovia, Canastota and at Nichols Pond in 1935. No one would take issue with this business for another 20 years. 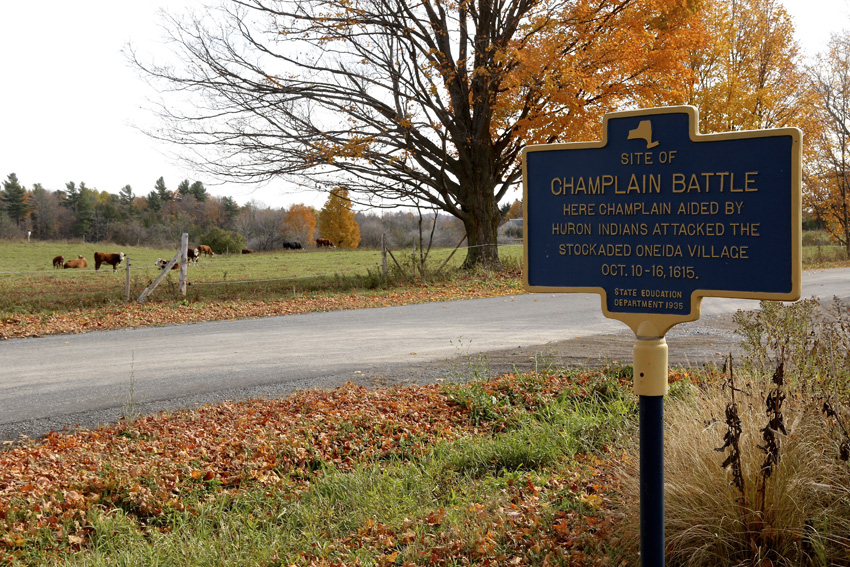 In his 1995 treatise “The Real Battle of Nichols Pond, a re-examination of Ledyard’s A Long Lost Point In History,” the late Dan Weiskotten, an archeologist-historian with SUNY Binghamton and former Cazenovia town historian, dismissed Clark’s conclusions. Weiskotten employed the use of what he called “negative evidence,” that is, the absence of any verifiable proof produced at the site to support what had long since become a local, ingrained and generally accepted story.

Prior to that, in 1963, the late landscape architect and historian Gordon De Angelo conducted a comprehensive survey of the site. He concluded that it did not correspond to the documentation left by Champlain, especially the sketch of the battle, which he described as having “considerable artistic license.” 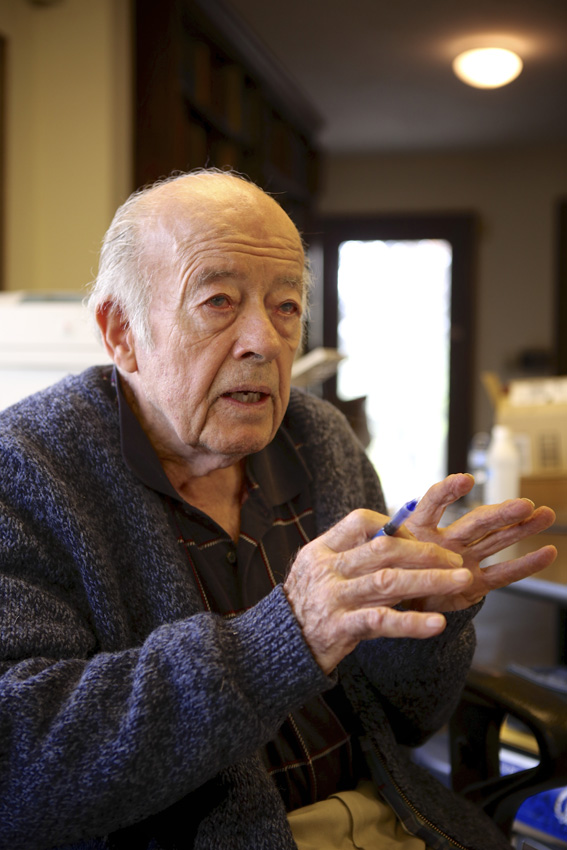 But those studies, and others, ultimately defer to the work of Cazenovian Peter Pratt, the professor emeritus of archeology at SUNY Oswego. At the direction of state archeologist William Ritchie, Pratt conducted excavations at Nichols Pond in the mid-1950s. In contrast to the pronouncements by Clark and Ledyard, which came without any empirical data, Pratt’s digs revealed both positive and negative evidence.

Meticulously detailed in his doctoral dissertation, published in 1976 as Archeology of the Oneida Iroquois, Vol. 1, Pratt unearthed a trove of artifacts including pottery and pipe fragments, stone and bone tools and a series of post molds, indicating that the village had, as Champlain described, been enclosed by a palisade. Conspicuously absent from the recovered objects, however, were articles of European manufacture, specifically brass pots, metal tools and weapons, and glass beads and ornaments typically found at other sites dating to the early 17th century. “No European trade goods whatever were found,” Pratt observed.

The methodology also included comparing the evidence to similar discoveries at other early Iroquois habitation sites and, using carbon dating and a process called ceramic typology, establishing the time period for Nichols Pond occupation to be prehistoric, sometime in the middle of the 15th century. In other words, the Oneida habitation at Nichols Pond had long since been abandoned by the time Champlain and his allies showed up in Central New York more than 100 years later.

Referring to the 1615 fight, Pratt added that there was “no evidence of a battle at Nichols Pond,“ a conclusion he reiterated in the 1977 publication Current Perspectives in Northeastern Archeology. “An excavation,” Pratt stated, “revealed no evidence of any battle whatever.”

Pratt’s dissertation also re-examined the written record of Champlain’s journal, the enigmatic map (published in several versions) and the sketch (done sometime after the fact), the same documentation that fueled Clark’s certainty. Finding problems with the translation of the journal, written in Renaissance French by Champlain aide Claude Collet and not published until 1632, Champlain’s sense of geographic proportions, and a host of inconsistencies between those records and the Nichols Pond site, Pratt brought Clark’s suppositions into further question.

Under close scrutiny, Clark’s self-assured conjectures just didn’t add up. “Nichols Pond,” Pratt concluded, was “not the site of the Champlain-Iroquois battle of 1615.” Ritchie subsequently disavowed Clark’s conclusions, noting that the Oneida village had “existed in the middle prehistoric period, many years before Champlain’s venture.”

Presumably this evidence would deflate the matter, but the legend of the first governor of New France invading bucolic Fenner has had long legs and sticky feet. Noting that no other site has been validated — Onondaga Lake is the prime suspect — a fact that has left the door of history ajar, Madison County historian Matthew Urtz offers a guarded, noncommittal response, willing to speculate only that “there is never going to be a direct answer.”

Jim Petrezyn, a planner with the Madison County Planning Department, which owns the park, is equally reserved in his official response, admitting that the battle took place “within 30 miles of Nichols Pond.”

In contrast, the Madison County Historical Society, which maintains volumes of records on the topic, professes adamant neutrality. “We are a research facility,” executive director Sydney Loftus said recently. “We are not in a position to take sides.”

Although the Oneida Nation’s tribal historian Jesse Bergevin declined to comment on the issue, tribal members in the past have describing the park as an ancient ancestral site, “the cultural patrimony of our people.” Tony Wonderly, the former Oneida tribal historian, added that it is “very unlikely” that the 1615 battle took place at Nichols Pond and described the subject as “a dialogue between white historians from the 1800s.”

No one, however, has been more invested in the Champlain legend than Russ Cary, a fourth-generation farmer whose land abuts the park. A former Fenner town supervisor and currently chair of the Madison County Parks Commission, Cary was present as a 12-year-old during Pratt’s digs in 1955 and 1956. Having been a supporter of the Clark version of history in the past, Cary now describes the locale of Champlain’s assault as having been “in the area.”

His focus has evolved as well. Like planner Petrezyn, who pointed out, “If there was no (historic) sign there, no one would know Champlain was anywhere near here,” Cary adds, “Whether this is the exact spot (where the battle took place) or not, it is a great place to celebrate the event.”

Still, in spite of all the evidence, positive or not, mixed messages remain. The official Madison County brochure declares Nichols Pond Park to be the “Recognized site of (the) Champlain-Oneida Battleground.” Similar confirmations can be found on the websites of Madison County, the Cazenovia Chamber of Commerce, the town of Fenner, New York Traveler, CNY Hiking, and Myroute20. 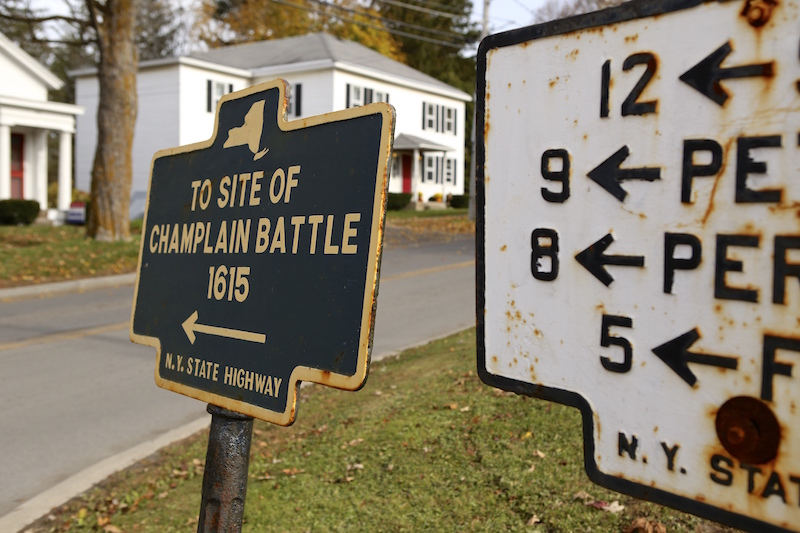 A sign in Cazenovia directing to the location of the battle.
Michael Davis photo | Syracuse New Times

Wikipedia, the online encyclopedia, is completely confused. In its pages on Champlain, Wikipedia refers to the battle site as an Onondaga fort and notes that the Nichols Pond story has been “regularly disproved,” and then proceeds to describe how Champlain attacked the Oneida village (Nichols Pond) 10 miles south of Canastota.

And then there are the historic signs at the park itself. The original state marker, declaring the site authentic, was replaced in 2000 with a new aluminum model with the original language. The larger, more comprehensive wooden sign originally erected by state anthropologist William Fenton who, in his uncertainty, speculated, “It’s as good a place as any to put up a sign,” was redone more recently. The language here is anything but uncertain, certifying Nichols Pond as the 1615 battle site and calling the conflict “the most decisive battle in American history,” one where “the question of whether America north of the Rio Grande was to become an English or French territory was decided.”

As the 400th anniversary of Champlain’s Oct. 10-16 invasion loomed, a small crowd gathered at Nichols Pond Park on Oct. 4 to participate in Archives Day, an annual event sponsored by the Madison County History Department. Oneida Nation spokesman Ron Patterson and tribal historian Jesse Bergevin discussed tribal history and indigenous traditions, and Madison County historian Matthew Urtz displayed trays of ancient artifacts dug up at the site. The matter of whether or not Champlain ever set foot on the site took a back seat, with Patterson noting that his ancestors who lived there did not keep written records, and Urtz noting that that matter was “very much up to debate.”

Henry Marshall, a Colgate junior and Upstate Institute intern, also spoke, reiterating the written record on Champlain’s travels, motives and alleged presence at the site. When queried, however, Marshall would pin Champlain’s attack only to “the general area.” The consensus, however, was clear, with the commemoration of the event, and the historic reverberations, wherever it occurred, being the focus of the gathering.

Today Nichols Pond Park remains a hidden gem, a place of fetching pastoral charm, and an increasingly popular destination for picnickers, reunions and weddings. The pride and joy of Madison County Parks chair Cary, who is eager to give guided tours of the 45-acre reserve, Cary can point out the grain pits, stockade locations and burial areas of the ancient Oneidas, as well as the recent updates, including new restrooms, a solar-powered water system, the new post-and-beam pavilion, the wetland observation deck (the pond is actually a shallow, seasonal swamp) and the interpretative signs complete with scannable Internet links.

The issue of whether or not Champlain ever besieged the Iroquois in rural Fenner or, as most scholars believe, on Onondaga Lake at the location of the megamall Destiny USA 400 years ago, is likely to endure as long as anyone is willing to squint hard enough to make the tangible evidence, or absence of it, fit the documentary record. Still, to Cary and others, Nichols Pond remains “an important part of history that shouldn’t be forgotten.” As historian Gordon De Angelo said about Nichols Pond, “It’s a great place to walk your dog.”