Green Party activist Ursula Rozum doesn’t remember when she first heard it. Sometime during the two and a half campaigns she managed for Green perennial candidate Howie Hawkins, or her own congressional run in 2012, someone passed on word of the mythical prohibition on politics before Labor Day. But it has no reality for her this year as she serves as campaign manager for Frank Cetera, the Greens’ 2nd District Common Council candidate.

“Election Day is early this year,” she observes. “It’s on Nov. 3. We looked at past election results and we figure if we get 1,250 votes, we can win. If we can talk to voters and win over 50 supporters a week, we’ll have enough to win. That will take at least 20 hours of door-knocking a week. That’s a lot of work, and voters are much more excited to meet the candidate vs. campaign workers. We’ve got a schedule and we’re doing things we haven’t done before, like working barbershops.”

It’s Cetera’s first time on a ballot, but he’s no Green stranger. “I’ve been working on Green campaigns here in Onondaga County since 2010, during Howie’s first run for governor,” he notes. “During that time I’ve been a volunteer on the street. I’ve also held roles in the campaign offices, such as volunteer coordinator, campaign budget management and office management. I’m also a certified NationBuilder expert. NationBuilder is the state-of-the-art database software we’re using for our calculations.”

Cetera says people are talking issues when he knocks on doors in the 2nd District, especially community policing on the Near West Side. “Most central to this campaign is the issue of poverty,” he maintains. “In my experience as a business adviser and as board president of Cooperative Federal Credit Union, I know the needs of people who are underserved in the financial world. With that mindset I can bring it to another level in city government.” 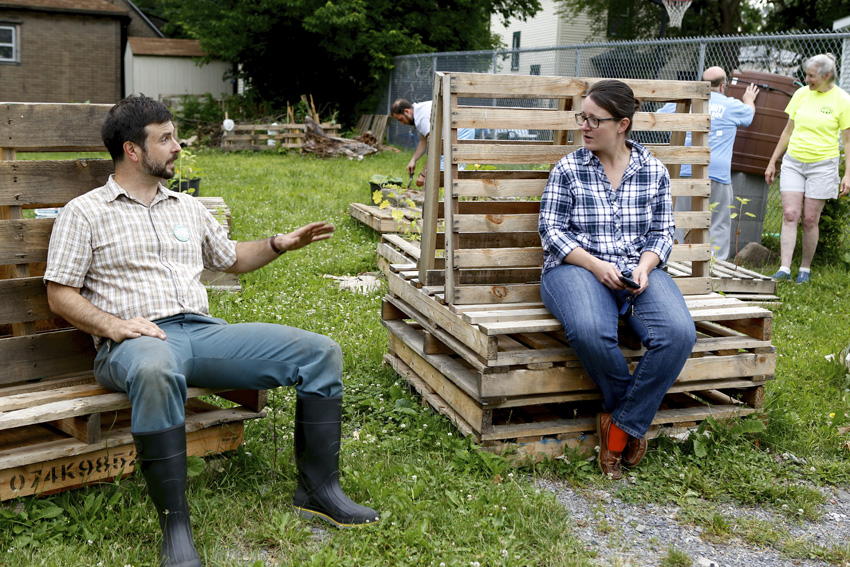 He cites an intriguing mix of constituents in the district. “It’s pretty diverse as far as types of neighborhoods go,” he reflects. “You’ve got the Near West Side and Skunk City. You’ve got Tipperary Hill. Then you go down into Park Avenue in the Polish neighborhood. Then the lakefront and Inner Harbor, where you don’t have a lot of residents, but it’s increasing the number of residents as all this development is taking place. You’ve also got the western edge of the North Side, Court Street west and the upper half of North Salina Street.”

Cetera says people should vote for him because he is not afraid to speak up. “The current Common Council only goes halfway,” he says. “They will take considerations from the public and play with them until they come to some balance point, kind of trying to make everyone happy. I have a whole slew of ideas and visions for the city. On the council, at the end of votes I will create next steps. Now after a vote there’s kind of a dead end. People take an idea, they pass it, and move on to something else.

According to the numbers, however, for Cetera and Rozum getting a Common Council seat will be a distinctly uphill battle. Only 53 2nd District voters are registered as Green. Democrats hold sway with 5,478, followed by non-enrolled with 2,891 and Republicans with 1,679. The district rolls also list 517 in the Independence Party, 139 Conservatives, 122 in the Working Families Party and seven Libertarians. Current incumbent Chad Ryan beat former Syracuse Police chief Steve Thompson in a Democratic primary before winning the general election by a comfortable margin.

Ryan says there are good and bad days on the Common Council, but that he is mostly enjoying his first term, especially providing constituent services, which, he maintains, is what the council is really all about. “I’ve worked hard on the council,” he says, allowing that he is also bucking the Labor Day political mythology, having already started knocking on doors.

“He’s a nice guy,” Ryan says of Cetera. “I’ve worked with him on neighborhood stuff.” But he suggests that Maryrose Angelo, currently passing petitions for the Republican nomination, may have gotten into the race a little late.

Angelo, born and raised in the city, has lived on the West Side for four years and says the district can stand a lot of change, especially keeping the neighborhoods clean and safe. She says she has always been involved in politics, especially inspired by her uncle, Congressman John Katko.

“Uncle John is an inspiration,” Angelo admits, “but we don’t share every position on issues exactly. I need to help get the wheels rolling. It’s got to be my own thing.”