Blood, bad men and betrayal mark the aftermath of a jewel heist gone sour in a stage version of Quentin Tarantino’s Reservoir Dogs

Most people think of Quentin Tarantino as a picture guy. In response, J. Brazill, the actor-turned-playwright and director, wants you to think of Tarantino as a word guy. His tribute adaptation of Tarantino’s breakout film Reservoir Dogs (1992) at Central New York Playhouse re-stages much of the action and follows the plotline fairly closely. Car chases and broken glass are gone. Tim Roth’s staring-down of a drug-sniffing police dog in a urinal is described rather than seen. Some of the violence is retained, with quantities of stage blood spilled. The show consists mostly of Tarantino’s dialogue, often profane, yes, but brimming with his characteristic brutal irony and wit.

The opening scene, highly faithful to the film, demonstrates what Tarantino and Brazill are about. A group of rough-talking men are gathered in a diner for breakfast. All but two wear black. Those two are heavyweight Joe Cabot (John Brackett) and his smiling son, Nice Guy Eddie (Joel Miscione), who have organized the occasion. As in so many Tarantino creations, characters speak knowledgeably about popular culture, especially music and movies, never sports. The one called Mr. Brown (Navroz Dabu), played by Tarantino himself in the movie, rants in graphic terms of the hidden sexual messages in Madonna’s “Like a Virgin.” Grumbly Mr. Pink (Dan Rowlands) refuses to leave a tip when Cabot picks up the bill.

What we barely notice is that the men are also planning a diamond heist in which there is likely to be bloodshed. 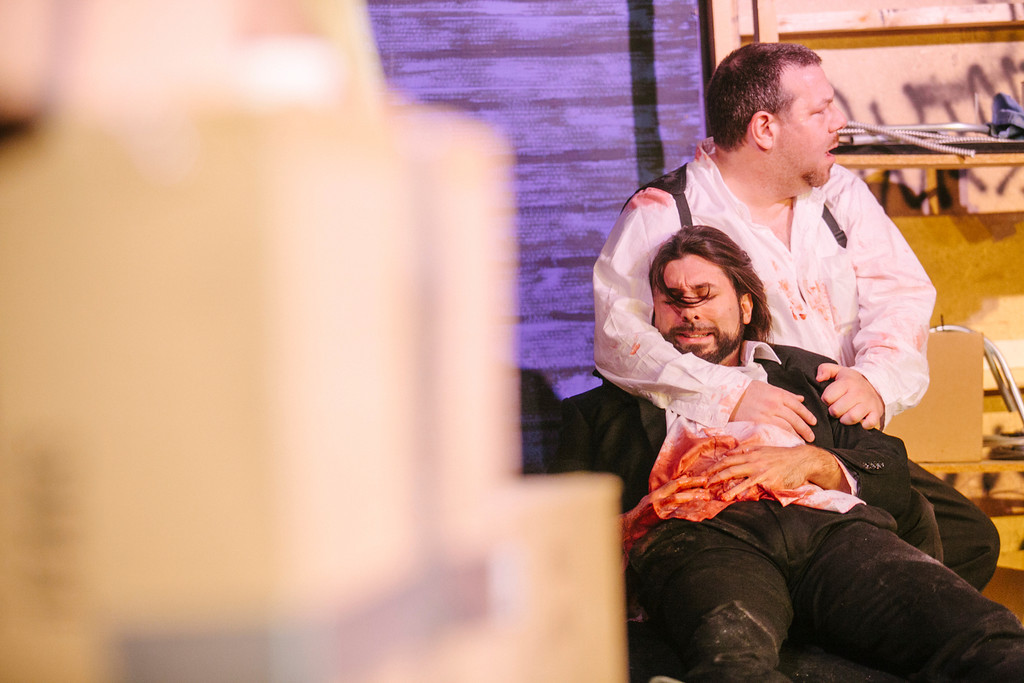 In the scene after that the robbery has nearly failed because the police, evidently forewarned, arrived too early. One of the thieves, Mr. Orange (Jordan Glaski), is already severely wounded, and is taken to a nondescript warehouse by the first among equals of the thieves, Mr. White (Jim Uva). Most of the rest of the movie and play take place in the warehouse with flashbacks. Scenic designer Navroz Dabu’s authentic-looking set enhances the desperate tone.

Three questions must be answered: Who betrayed the plan to the police? How to dispose of the bag of jewels surviving from the heist? And is there robbery among thieves? In other words, from here on to the end, Tarantino’s script was already essentially a stage play.

In restaging Tarantino’s words, Brazill has prudently chosen not to mimic the film’s visuals, which could have come out inadvertently comic. His players, evidently carefully chosen, do not look like the actors in the film. The original Mr. White was Harvey Keitel, defined in film history as the snarling urban tough guy in Martin Scorsese’s Mean Streets (1973). Taking that role here is Jim Uva, who swears as if he talked that way off-stage but walks with the deportment of a teddy bear. This is not an error but a calculation. The Mr. White in the text is a bit gullible, and his generosity makes for trouble.

Similarly, the movie’s Mr. Orange was Tim Roth, a clean-shaven, blue-eyed blond with a rat-like smile. Here Orange is dark-eyed Jordan Glaski, now sporting a Jesus beard and Prince Valiant-length hair. Glaski allows Orange’s cries of agony from the gunshots to fill the room, but when restored, as in flashbacks, he’s better than Roth at looking circumspect and projecting ambiguity.

Dan Rowlands’ Mr. Pink departs from Steve Buscemi’s squirreliness. And Andrew Brazill’s Mr. Blonde, the most sadistic of the lot, is lighter and more ironic than Michael Madsen’s.

The same, only different. Stage adapter Brazill’s efforts differ from those of tribute bands, who want to imitate, as minutely as possible, the original models. The audiences, including the one that packed the performance on opening night, presumably already know all the movie’s lines, not to mention the outcome. While changing the ending would be intolerable, Brazill is free to reshape and reinterpret the lines. Billie Holliday might be identified with “Strange Fruit,” but you would want to hear what Ella Fitzgerald did with it.

A loquacious interview, Quentin Tarantino has been the generator of his own legend, the fanatic video store clerk who taught himself film history one VHS cassette at a time. He also explains the inside joke of the title, “Reservoir Dogs.” It was the doofus mispronunciation from customers when he recommended Louis Malle’s Au Revoir, Les Enfants (1987). The words never appear in the script. Similarly, he long ago gave away all the film buff allusions to earlier movies like The Killing and The Asphalt Jungle. The Taking of Pelham One-Two-Three (1974) introduced the device of the perpetrators assuming the names of colors to shield their identity.

Tarantino’s links to the stage have been less explored, but Bill DeLapp astutely observed in these pages, in a September review of an Appleseed production, the auteur’s anticipation in dialogue from Harold Pinter’s The Birthday Party. Along with this, several contemporary stage writers have been most candid in acknowledging their debt to Tarantino, including the British-Irish Martin McDonagh (Beauty Queen of Leenane) and Oklahoma’s Tracy Letts (August: Osage County).

Ever since movies started talking in The Jazz Singer, the cinema was thought to be a threat to the stage. What J. Brazill and the people at Central New York Playhouse are showing in their take on Reservoir Dogs is that words that might have grabbed us from the screen have more effect when up-close, personal and live.

This production runs through Saturday, Nov. 9.

Destiny’s Children
Back to the Future
To Top