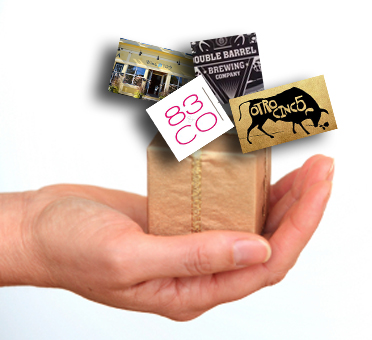 They say that good things come in small packages. Well, who doesn’t like small packages, especially this time of year? Here’s a look at four new food and drink destinations that have opened in Syracuse in recent weeks. They’re petite, but hopefully will make big and lasting impressions.

Westcott Street fixture Alto Cinco is small (about 24 seats) and a bit cramped. Sit at the bar for a bite or a beer, and you’re bound to bump elbows with your neighbor. That’s part of the charm of the Southwestern-California-Mexican cantina.

Otro Cinco, Alto’s new “sister” restaurant in downtown Syracuse, is even smaller: It has just 16 seats. But the mainly takeout restaurant has a big menu, big flavors and an ambitious agenda. The restaurant serves breakfast, lunch and dinner Mondays through Fridays and dinner on Saturdays. The good news: It’s already set to expand, as is the mothership on Westcott Street.

“Otro,” which translates to “another” in Spanish, is at 206 S. Warren St., the spot formerly home to Red Rose Diner. At about 8 on a recent weeknight, we found it to be warm, cozy and uncrowded. The mostly Mexican and Spanish menu features soups, salads, burritos, quesadillas, tacos, tapas, plates, paella and more, plus beer, wine and cocktails.

A friend makes regular trips from Cazenovia for the lobster tacos with corn salsa and avocado ginger mayo. My boyfriend declared the slow-roasted roast pork tacos, a special on the evening we visited, some of the best tacos he has ever had. We’re looking forward to trying the paella–a somewhat complicated rice dish we’re not likely to make at home. The paellas are made to order in and take a half-hour to prepare.

Double Barrel is the fourth brewery in Syracuse–behind Middle Ages, Empire and Syracuse Suds–and the smallest.

Home-brewer turned brewery owner Pete Kirkgasser opened his nano-brewery and tasting room last month at 108 Walter Drive, on the back side of the Sacred Melody Plaza, in Eastwood, which also houses Cafe Kubal. With its one-barrel brewing system, which Kirkgasser and his crew are happy to show you, it’s considerably smaller than a microbrewery.

It might be small, but Kirkgasser’s brews are big on hops and big on flavor. On a recent weeknight, we sampled five small pours for $2: a Belgian Pale Ale, Belgian Pale Strong, India Pale Ale, American Oatmeal Stout and American Barley Wine. About a dozen people came and went at the tasting bar, several toting their own growlers for a fill.

The lineup of offerings changes often. At this time, Double Barrel beers are available only at the brewery. Growlers (32 and 64 ounces) are available for purchase and fill. Prices range from $10 to $15 for a fill, depending on what you order.

If you’re a Syracuse University fan, you’ll feel at home; the place is done up in bright orange with blue trim. It’s open Mondays through Fridays, 4 to 7 p.m., and Saturdays and Sundays, 11 a.m. to 7 p.m.

Baker Esther Houston finally has a storefront for her custom cake business, which opened earlier this month in a lilac-colored house at 115 Green St. It’s a couple doors down from neighborhood fixture Hairanoia and next door to the new Wine @ 105 wine and spirits shop (see accompanying item).

83 & Company is noted for its cakes, cupcakes, cheesecakes, mini cheesecakes and wedding and special occasion cakes (including some gluten-free options).

If you’re looking for a petite sweet treat rather than a major splurge, the mini cheesecakes are the way to go. They come in over-the-top flavors, like creme brulee, cookies and cream and house favorite Brownie, Caramel, Ganache-Oh, My! The latter is a mini-cheesecake built on a brownie crust and topped with chocolate ganache, caramel sauce and pecans. Oh, my is right. The bakery also offers tea, coffee and espresso drinks and recently started offering soup at lunchtime.

The Hawley-Green neighborhood is home to a hair salon, an art gallery, a couple restaurants (Laci’s Tapas Bar; SparkyTown), a new bakery (the aforementioned 83 & Company) and now a wine boutique.

Wine @ 105 opened in November at 105 Green St. It’s sandwiched between Hairanoia (at Catherine Street) and 83 & Company. Shop owners Tim Ahart and Michael Hawke offer an eclectic, affordable mix of wines from Argentina, Chile, France, Spain, Portugal, Italy, Germany, Australia and New Zealand, California and the Pacific Northwest and plan to offer some wines from New York, as well. You’ll find plenty of selections in the $10 to $15 range. They also offer a small selection of small-batch spirits.