Mithila Painting: The Evolution of an Art Form springs from a centuries-old tradition of women in the Bihar region doing wall and floor paintings to celebrate family and home life. Then in the 1960s a few women began painting on paper and selling their work. Ultimately, there was an upheaval in Mithila painting as more people sold their creations, subjects and styles changed, and several painters achieved international status. 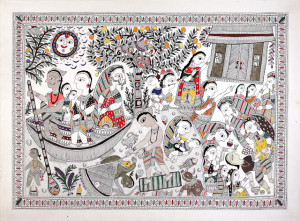 The exhibit centers on notions of change and tradition, with an entire section devoted to Hindu gods and goddesses. Dulari Devi’s beautifully detailed painting depicts Ganesha, seen in the guise of an elephant and regarded as purveyor of all that’s good. And Baua Devi created an artwork showing gigantic snakes holding up the world. Both artists, like nearly everyone else in the show, work in an acrylic format.

Other works illustrate that Mithila painters move in different directions. For example, Lalita Devi’s “A Dusadh Story Board,” consists of 99 squares, each of which references a story, song, or household item.

That tendency is even more pronounced in the section encompassing social commentary and events during the 21st century. Painters have dealt with the terrorist attacks of Sept. 11, 2001, as seen in Leela Devi’s painting; with the tsunami’s devastation of Sri Lanka in 2004, as commemorated by Amrita Das; and with events in India itself.

In the state of Gujarat in 2002, inter-community violence began with an incident in which Muslims set a train afire, killing Hindu passengers. That was followed by a three-day rampage in which roughly 1,000 Muslims were murdered. Santosh Kumar Das mourns that period with a painting portraying three subjects: The god Ram, also known as Rama, weeps; Gandhi, the apostle of non-violence who completely opposed taking revenge, is dismayed; and Mother Earth cries out, impaled by the god Shiva’s trident.

Mithila painters typically work with colors including green and blue, orange and yellow, and most of all, red. Look for Rambharos’ fine painting, “Nagknya-Underwater Snake Maiden.” It’s just one of several pieces that are visually dazzling.

A second show, Arts on Main, Contemporary Prints from South Africa, displays works created during the past five years. Vusi Khumalo’s powerful collograph, “Barracks,” dwells on people forced to live in squatter communities, economically and socially dispossessed years after the fall of apartheid. In his prints, he often uses items such as rusted tin and stones, objects he found in those communities. 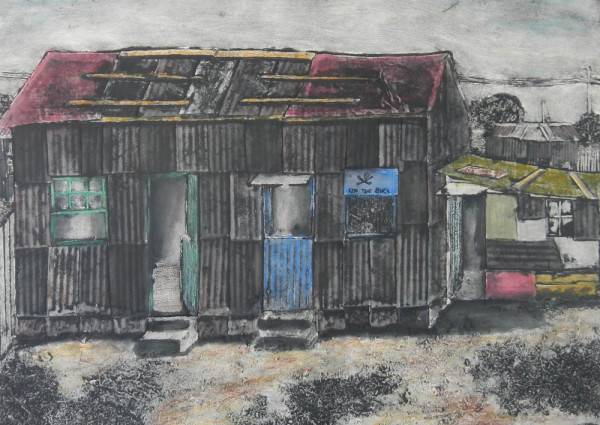 Other interesting prints include Locust Jones’ linocut, “3 a.m.” and Diane Victor’s “Smoke Screen” and “Ash Man-Johnny,” which utilize materials such as ash or smoke. Deborah Bell’s “White Lion,” a drypoint on wove paper, integrates a majestic figure with a human’s lower body and a lion’s head, a lion shot with arrows, and other elements. It’s an intriguing artwork.

Finally, William Kentridge: Nose and Other Subjects looks at an artist with multiple interests. He’s created prints, drawings and paintings, worked in film and video, and even staged Nose at New York City’s Metropolitan Opera. That production interpreted Dmitri Shostakovich’s opera in which a bureaucrat’s nose leaves him and takes on a life of its own. 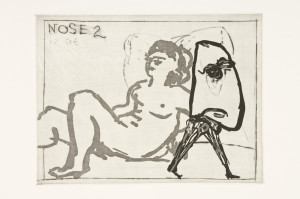 The show presents “Telephone Lady,” a linocut on Japanese kozo that’s almost seven feet high. It displays 30 of Kentridge’s prints that functioned as a storyboard of sorts for the New York City production. Nose is seen in a tutu, as a political prisoner, with a lover, being confronted by Joseph Stalin.

Elsewhere, the exhibit offers linocuts on non-archival pages from a dictionary, a series of three flipbook films, and a video in which the artist discusses his work. The show discusses Kentridge’s art in a coherent and accessible manner.

All three shows run through March 16 at SU Art Galleries, located in the Shaffer Art Building, on the Syracuse University Quad. The venue is open Tuesdays, Wednesdays, and Fridays through Sundays, 11 a.m. to 4:30 p.m., and Thursdays, 11 a.m. to 8 p.m. For more information, call 443-4097.

Shifting Perspectives
Nazi Germany is revealed in a subtle, shocking show at ArtRage
To Top