WEEKEND WARRIOR: Concussions are a serious issue for school-age athletes

For the second straight year, the Lady Knights are wearing protective head gear:  soft black helmets that wrap 360-degrees around the head. The head gear is designed to protect the head from injury. While a handful of Section III players have sported the head gear during competition, Ludden/Grimes is one of the few teams on which every player wears one. Spring practice started March 10.

“Sometimes sticks are flying,” says Seanna Laneve, an 18-year-old senior at Bishop Grimes. “Now if we get hit in the head, it doesn’t affect us like if we didn’t wear them.” 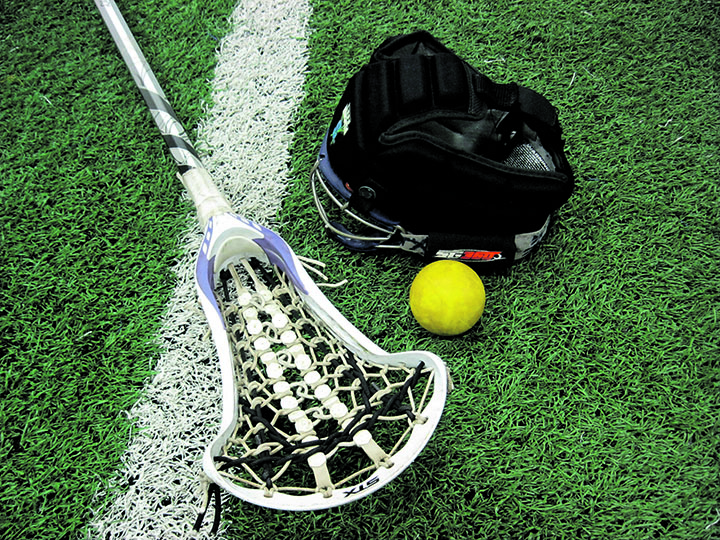 “We don’t mind them anymore. We get it’s about our safety,” Teresa Shattuck says.

Concussions, a brain injury caused by a blow or trauma to the head or body, are a serious issue for school-age athletes because of the possible long-term health risks stemming from sports-related head injuries. According to the U.S. Lacrosse, most concussions happen without loss of consciousness; symptoms include headache, nausea, dizziness, confusion and memory loss.

The Institute of Medicine and National Research Council reported in the fall that sport concussion rates for female high school and college athletes were highest for soccer, lacrosse and basketball. For males, it was for football, ice hockey, lacrosse, wrestling and soccer.

Section III Athletics follows the guidelines and protocol of the National Federation of State High School Associations regarding concussions. An athlete diagnosed with a concussion is restricted from playing until cleared by a health‐care professional.

Girls lacrosse is different from boys lacrosse, as aggressive stick checking and body contact is illegal in the girls game. But unintentional and errant contact to a player’s head with a stick or ball occurs sometimes, Laneve says.

“No one tries to hurt anyone. It just happens,” Laneve says.

The state Public High School Athletic Association and Section III doesn’t require girls lacrosse players to wear head gear. But Ludden/Grimes coach Mark Shattuck made it mandatory for his team last year after a former player suffered a severe concussion at a summer tournament, then coped with post-concussion symptoms such as headaches and sensitivity to light.

“When she got hurt, I said, ‘That’s enough,’ ” Shattuck says. “When on many occasions I saw doctors prescribing these helmets to players after the fact, that made no sense to me, so I decided to put them on everyone.”

Shattuck’s daughter, Teresa, is a junior attacker for the Lady Knights. The decision to wear head gear as a preemptive safety measure wasn’t embraced by players at first, but Teresa Shattuck and her teammates eventually came around to the idea.

“We don’t mind them anymore. We get it’s about our safety,” Teresa Shattuck says.

“I like wearing them, I feel a lot safer playing,” Bishop Ludden senior Nicole Granteed says.

Children and teens are more likely to get a  concussion or other traumatic brain injury (TBI) than adults and take longer to recover, according to the U.S. Centers for Disease Control and Prevention. During the last decade, emergency-room visits for sports- and recreation-related TBIs among children and teens increased by 60 percent. Overall, the activities associated with the greatest number of TBI-related were bicycling, football,  playground activities, basketball and soccer. Of nine sports the CDC studied, TBI represents almost 9% of all injuries reported.