In a world full of fabrication and Photoshop, satirist Bill Maher has built a career out of honesty.

In a world full of fabrication and Photoshop, satirist Bill Maher has built a career out of honesty.

“The bond that I have most profoundly with my audience is I never say anything I don’t mean,” Maher says. “I never pull a punch. I say things that challenge my own audience’s beliefs and that’s OK.”

While many walk fine lines between acceptable and inappropriate, Maher has never tiptoed. That was evident with his first television series, Politically Incorrect, which began in 1993 on the Comedy Central network, then relocated to ABC’s late-night schedule in 1997. Following the Sept. 11, 2001, attacks, however, Maher’s controversial comments with one panelist led to network outrage and advertiser defections.

A conservative guest, Dinesh D’Souza, said the 9/11 terrorists were not cowards. Maher agreed: “We have been the cowards. Lobbing cruise missiles from 2,000 miles away, that’s cowardly. Staying in the airplane when it hits the building. Say what you want about it. Not cowardly. You’re right.” ABC, citing low ratings, canceled the series in July 2002.

Maher was not off the air very long. February 2003 saw the HBO debut of Real Time with Bill Maher, a weekly hour-long politically based comedy show that has been renewed by the cable network for a 13th season.

In the meantime, his 2008 documentary Religulous became the eighth-highest grossing documentary and he has garnered 32 Emmy nominations over his 30-year career. But on the phone from Los Angeles, Maher is frank about his rise from a kid with a dad in radio news to one of Comedy Central’s 100 greatest stand-up comedians of all time. 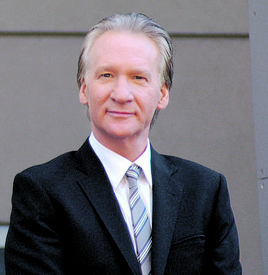 Did you always want to be a comedian?

Some kids think they’re funny and like making the teacher and kids in class laugh. It was always something I wanted to do but was probably too shy to tell anybody. But it was. I got out of college, moved to New York and got started.

Where did your interest in news and history spring from?

My father was a newsman in radio when every station had news at the top of the hour. In our house, I heard my parents talking about politics as dinner-table conversations, which I don’t think is typical in most of America. It was always something I was interested in. I was a history and social studies kinda kid, not science.

How did you start combining your interests in politics and comedy?

If your interests are being funny and news, that’s how it comes out. But when I was first starting out, it was difficult. People generally don’t accept political opinions from someone who’s 23 years old. You look like you just started shaving yesterday and you’re giving opinions on the president. It’s something you need to grow into.

What did it take to build your career?

There’s no shortcut in comedy. It’s a rude awakening: Every comic thinks they’re funny, then you discover it’s extremely different in front of an audience, not your friends. Comedy is so difficult. At first, it’s horrible. It’s literally depressing for the first year or two. Trying to find a voice and way to make people laugh 10 to 20 minutes is hard. Then it gets easier. The next 10 years, it gets easier.

What advice do you have for aspiring comics?

Don’t get down about it. Just keep working. When we started back in New York, you’d just do as many sets as possible. On weekend nights, you could be ambitious and do six sets in a night if you ran from cab to cab to each club. That’s what it takes. It takes 10,000 hours to learn anything. Piano takes that time. Eventually you’ll find your own voice. Everyone in music starts out imitating other people. Even The Beatles started out sounding like an American rock and roll band. Eventually you take in the past, synthesize it and make something new. Once you have something new, then you have something. Nobody needs to see what they have before.

You’ve made a living out of being very honest, sometimes to your detriment. What inspires you to do this?

When I went on air with Politically Incorrect, everyone said it would never work. They said, “You can’t be a talk show host who expresses their own opinions. No one else ever did. As soon as you do that, you’ll alienate half of your audience.” I said, “Let’s give it a try.” Even if they don’t agree, they can still watch. The audience can accept the fact that they may not agree, but like with friends, you don’t have to agree on everything. People will tell me, “I’m conservative, but I watch your show. You’re funny.” Funny goes a long way toward covering up a lot of sins.
Bill Maher performs Saturday, Sept. 6, 8 p.m., at the Landmark Theatre, 326 S. Salina St. Tickets run $54.50 to $95.40. For information, call 475-7980 or visit landmarktheatre.org