It’s been almost two months since my scoop on Modern Malt, which now (officially) joins the string of businesses along Clinton Street in Armory Square. As a diner junkie, it’s only fair that I weigh in with my two cents. The food, atmosphere, and people of a diner makes or breaks a place.

Although I tested out the stools, I never had the opportunity to try the food; the stoves were in place, but they weren’t working at the time of my initial story about Modern Malt. However, the opportunity arose with “Sunday afternoon’s sibling lunch outing” – a spontaneously named event that the four of us swear by.

The wait at Modern Malt danced around an hour’s length. My future sister-in-law, however, called ahead and secured a spot. We met at the restaurant.

Upon entering, Manager Chris Bily was weaving in and around people in the crowded eatery, helping with crowd control and bussing tables. The main entrance, which is located in the alley by SKY Armory, was packed with hungry patrons. (It’s funny how waiting customers coagulate by the cold doorway instead of pushing in and around the corner.)

Those old malt shop melodies played over the speakers. The music, similar to some mall-and-chain eatery, wasn’t overpowering or distracting to conversation and the songs were recognizable.

The hostess was cool and calm with the crowd and she dealt with cocky Syracuse University students appropriately.

It’s great that the students are venturing down to explore our city more, but because mommy and daddy give them the credit card to use it doesn’t mean they’ll get their way. The messy-haired, puffy coat wearing , pubescent and poorly played mustaches, the shorts, and the untied sneakers all added up for a sore sight. The ring leader, who just had to be heard, announced his question as to why they had to wait so long, if there was another —

Wait. What am I doing? Who cares about these people I just observed to take my mind off my own hungry stomach?

We were seated in the booth by the opposite door. The cushions are definitely comfortable. The compactness of the booth, however, was different. For four people ranging in height from 5’10” and above, the leg room wasn’t the most appropriate. If I were in the comfort of my own home, sweatpants and spread eagle would be my normal. Here, however, this booth had different intentions — encouraging good posture. (Good posture = happy body.)

First comes first: brunch cocktails. There are no rules when it comes to the definitive brunch cocktail. I’m a huge fan of Empire Brewing Company’s mojito when not opting for their brunch coffee. Erin and Tara, the sister portion, opted for the Bloody Mary, which they both applauded. My brother, Mike, opted for the Moscow Mule: the vodka and ginger beer and lime juice concoction, and it was served in a typical copper mug. 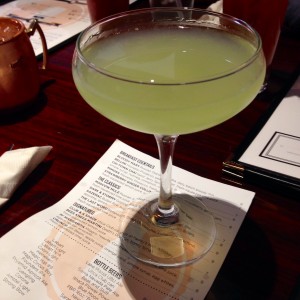 My beverage was The Last Word, which– upon its arrival — I confused with Beckett’s Fall, another gin-based drink that I enjoyed in Brooklyn’s Bearded Lady. It came out in a similar glass as the previous literature-related beverage, and it glowed cloudy green as well. The drink is made up of botanical gin,  green Chartreuse, maraschino liqueur and lime juice. It tasted as if I buried my face in the ground during an Adirondack hike and went to town eating the earth underneath me. It tasted that (re)fresh(ing). Seriously, the gin definitely made the drink stand out. I’d opt for it again.

For an appetizer, the four of us shared the Breakfast Poutine — tots, NY cheese curds, bourbon au poivre, poached egg, scallions and french-fried-frizzled onions. Due to the rave reviews Modern Malt has been receiving on the Canadian dish … Well, it lived up to its expectations. The gravy was creamy and full of flavor. The egg was perfectly poached. The cheese curds blended right in for a melt-in-mouth satisfaction. If our food wasn’t coming, we would have probably ordered another round. 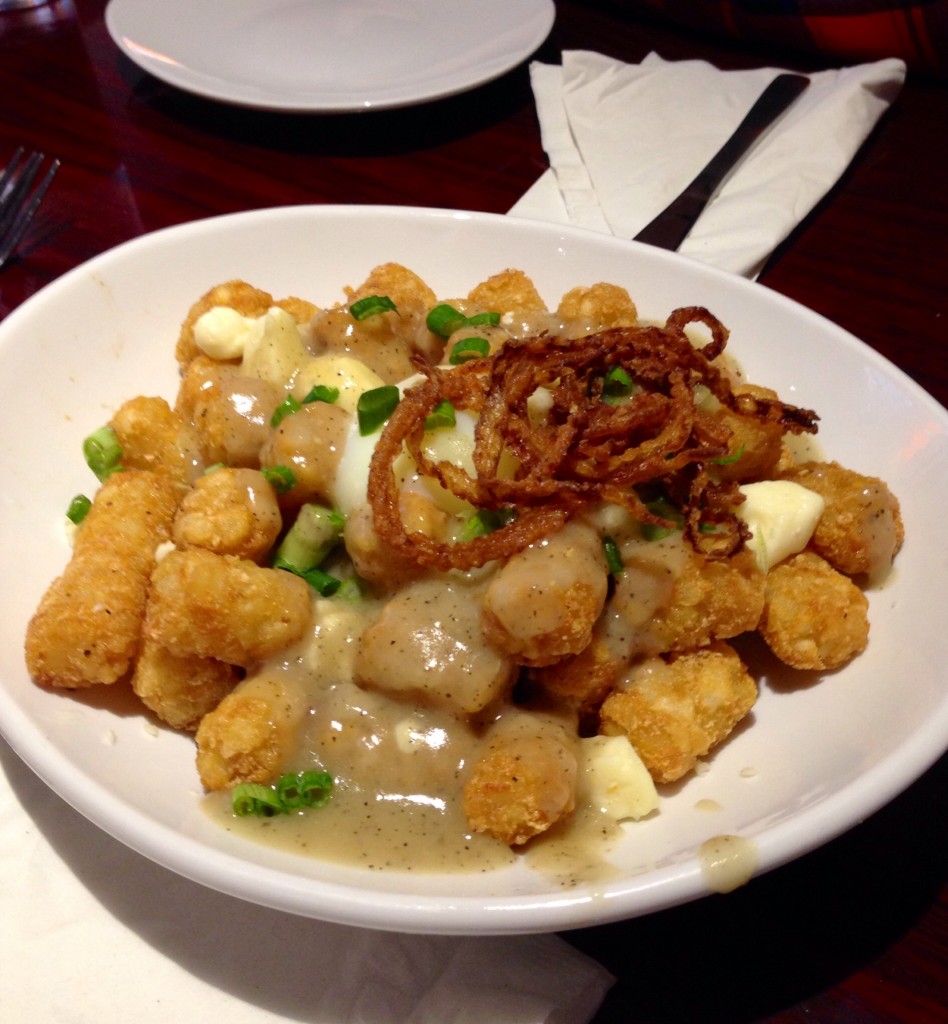 Tara’s Breakfast Piggy: brioche, slaw, cranberry jam-topped pork. Erin’s Chicken and (bacon-incorporated) Waffles dressed with maple-honey mustard sauce and cayenne syrup. Mike’s Rise and Shine Burger done “a little pink” with New York Cheddar and bacon jam and fried egg (oh, my!). My Chicken Scramble (with a side of bacon). We all left full, and there weren’t any leftovers. The only negative aspects to my dish: The bacon wasn’t fully crispy. (That would be my fault for not specifying how I enjoy my bacon: squealing until it gets hoarse.) 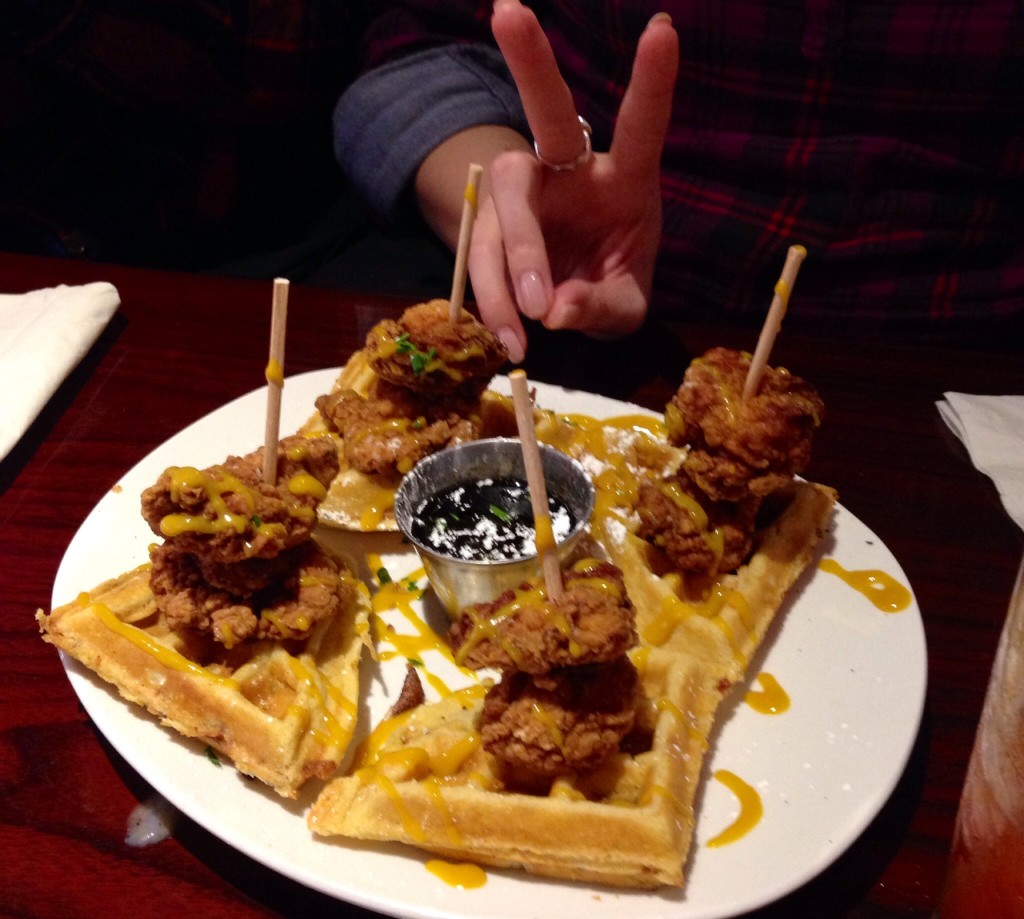 Mark Bullis and Chris Bily have a great thing going. Opening the eatery in a restaurant-dominated vicinity is a definite risk. However, so far, it works. It works very well. They gained four more customers. I love the busy atmosphere on top of the unique and specific diner menu.

If you haven’t gone yet, you should. Stop by and welcome Modern Malt — a quintessential Armory Square diner.