Sandwiched amid the big-box national retail giants that fill the Destiny USA megamall, there are also more than a dozen locally owned and operated businesses. For Pete Wlazlo, 30, the mall has enabled his Guitar Outlet, an independent, family-owned music store, to flourish.

“I don’t know that we could survive if we were free-standing,” he says. “We get lots of traffic in here that we otherwise wouldn’t.”

Wlazlo cites husbands who wander in while their wives are shopping and end up picking up their old guitar hobby. Parents on yuletide shopping duty notice the store as they’re passing and give a guitar gift a try. Traffic from Canada also helps keep their merchandise moving. But the move to the Destiny destination didn’t come until far into the store’s existence. 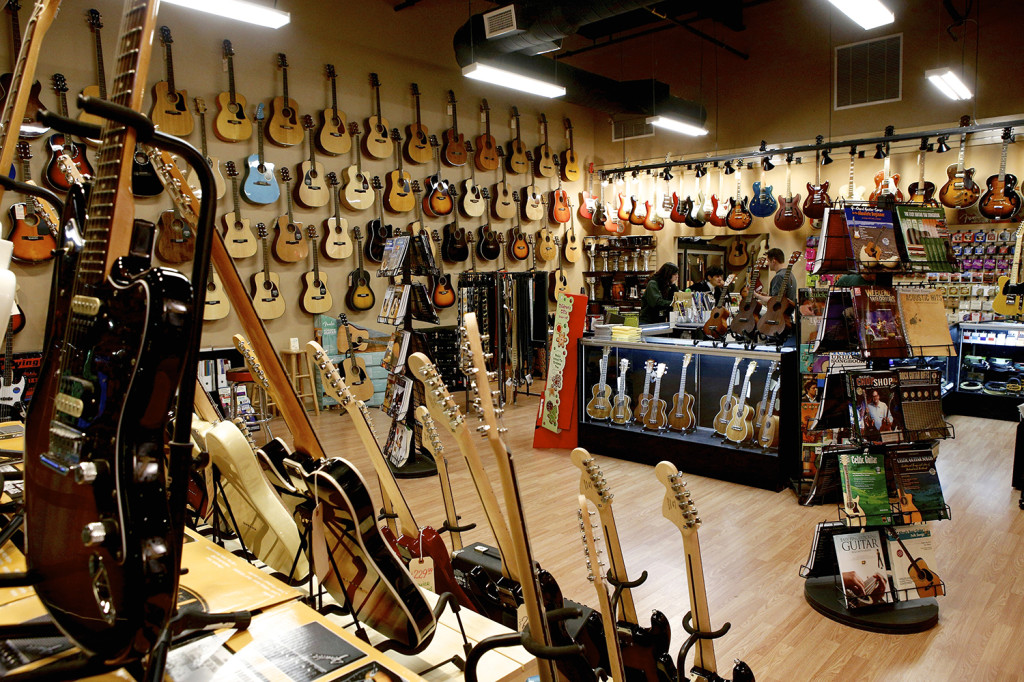 Although his father wasn’t an active musician, he did have a love for instruments that he passed on. Pete learned guitar as a child, yet he became more serious about the guitar-selling business as well.

The family operated stores in Central Square, Oswego and Cicero. In 1997 the then-Carousel Center approached the Wlazlos about relocating their business to the Hiawatha Boulevard mall. Although Pete attended college at the University of Miami, he stuck with the store business throughout; he even opened a Guitar Outlet in Miami for two years.

In 2007 he returned to the hometown location, which is now its single store. “I loved Miami and miss it,” Wlazlo says, “but there was no sense in closing a store that’s been a part of the music community here since the 1970s.”

That connection to the community continues, especially since Wlazlo has several local musicians on the Guitar Outlet payroll. Employees Mike Mahwinney, Jim Dunham and Max McKee have participated in Central New York bands, including Boots n’ Shorts, Soul Risin’ and Count Blastula, RESPECTIVELY?. Also aboard is technician Tim Hodgson, in charge of setups and repairs. 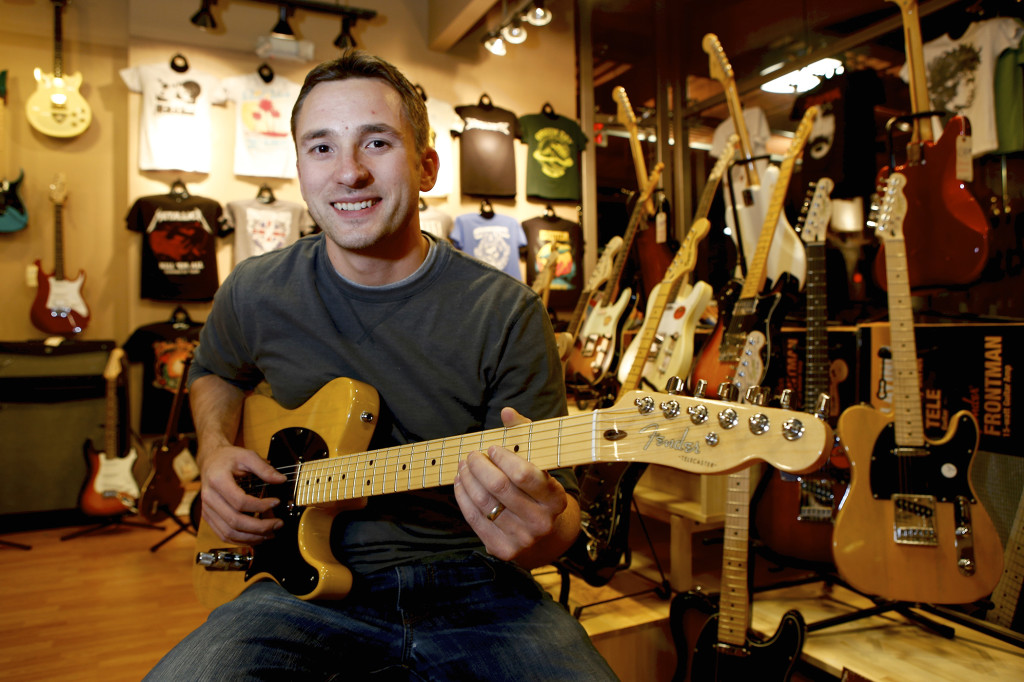 Wlazlo emphasizes that the store handles plenty of stock. “{Competitor} Guitar Center can carry everything because if it doesn’t sell, they can just send it to another store,” he explains. “That’s not the case here {at Guitar Outlet}, but we can order anything for anyone and we carry a lot more than people think.” 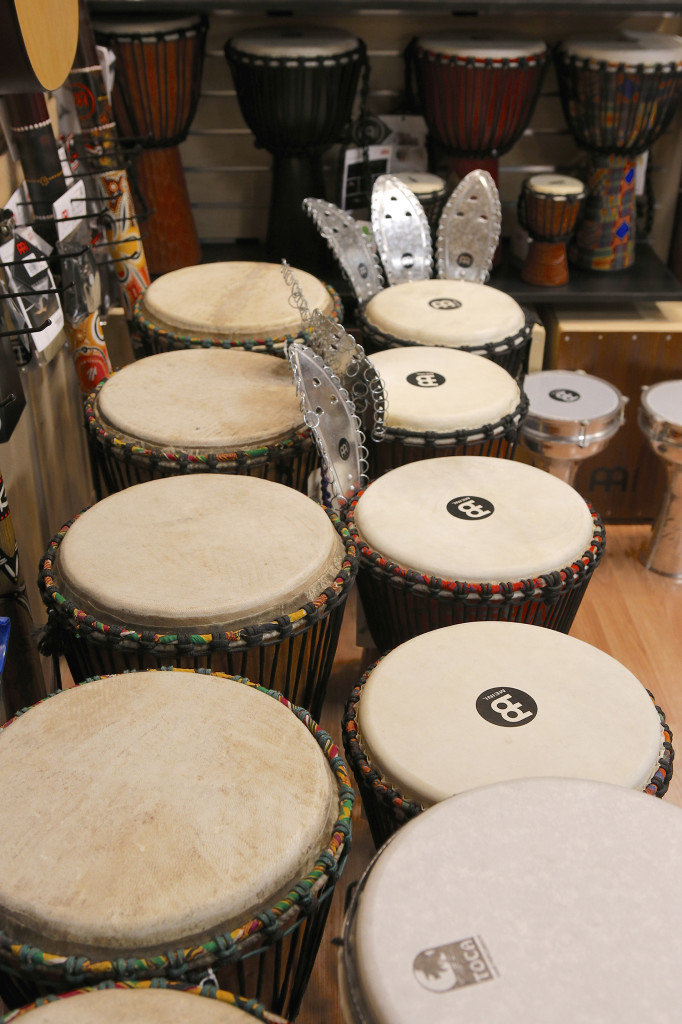 The store holds a full line of Martin acoustics, an impressive collection of new, used and vintage guitars, basses, ukuleles, banjos, mandolins, violins and a wide spread of various hand percussion. Guitar Outlet also has a collection of more unusual instruments, including an early 1930s-era National Duolian resonator guitar, a banjo sexto, a vintage Gibson tenor banjo and a mountain dulcimer. “We’ve probably got one of everything around here somewhere,” Wlazlo says.

Wlazlo also mentions that the store has limited supplies of school instruments such as clarinets and trumpets. Accessories are also available, including music books, straps, strings, stands, amplifiers, microphones and pedals.

Yet as much as the location benefits the store, it also hurts it. They’ve switched store fronts at the mall eight times since moving in, three times just within the last year due to the Destiny USA expansion. While monster stores can demand prime locations, Guitar Outlet is at the mercy of the mall’s space.

Wlazlo is still grateful simply to be within such a high-traffic consumer area, however. “It’s a tradeoff,” he says. “It’s been difficult sometimes, but they’ve {the mall’s operators} been good to us.”

Wlazlo also hopes that any misconceptions will be dispelled once people walk through Guitar Outlet’s doors. “I think there’s a misconception about the store,” Wlazlo says. “People outside the mall don’t realize what we have and who we are. We back up everything we sell. We’ll give maintenance, change strings, setups, and adjustments for anything people buy from here. We give musician discounts. We’re trying to improve and change that {misconception}. I think people might be surprised if they came and checked us out.”

Points of Reference: Nov. 22
The Defense Rests
To Top