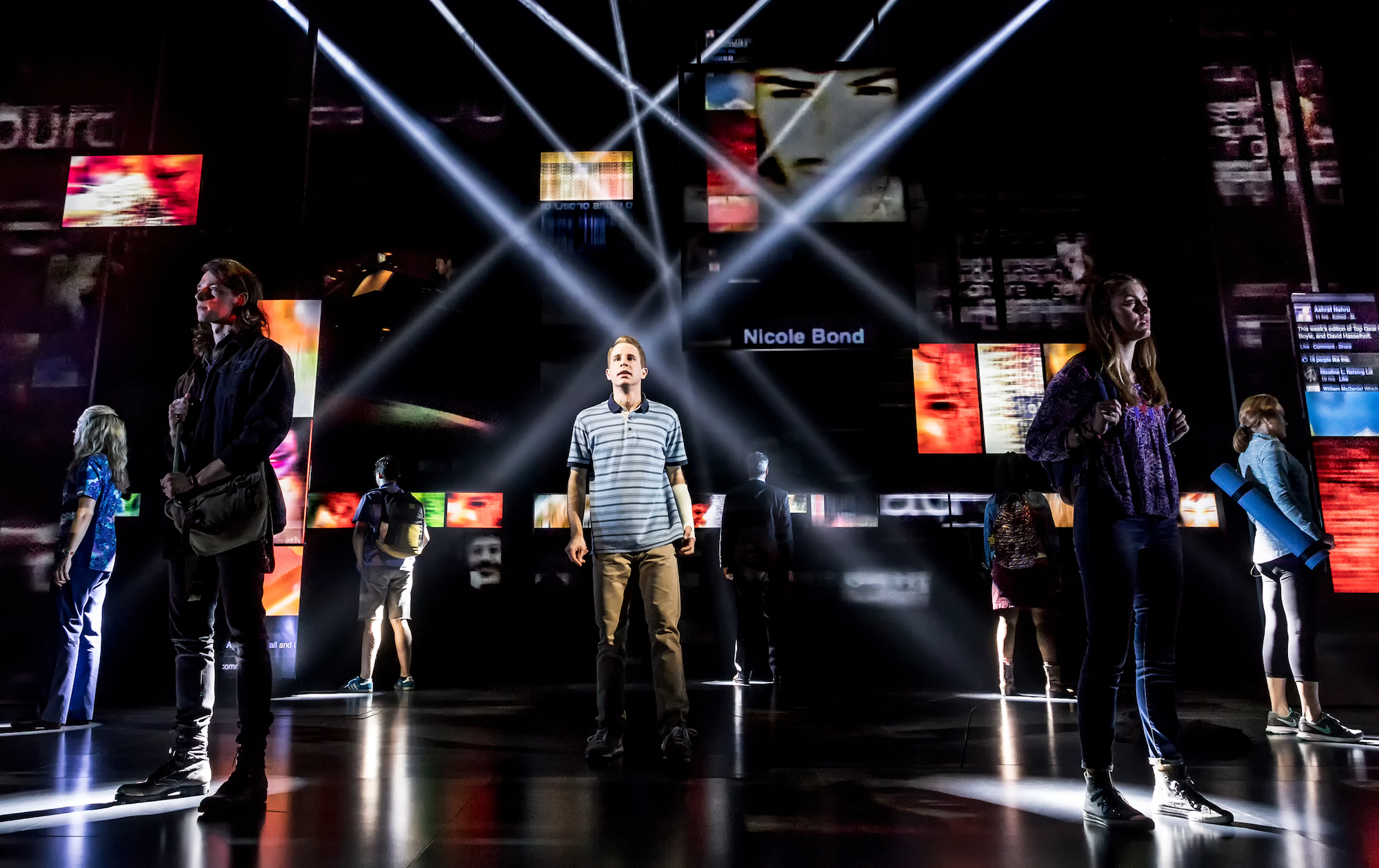 From West Genesee To Broadway

Steven Levenson’s book, with music and lyrics by Benj Pasek and Justin Paul, follows the title character as he deals with severe social anxiety disorder and the relationships he makes and loses along the way. Following a tragedy and a big little lie, the main character’s coming-of-age tale spirals into unforeseen circumstances.

On June 11, producer Stacey Mindich did the talking as the cast and crew stood on stage while accepting the Tony Award for Best Musical. Mindich, a 1986 alumna of Syracuse University, has mounted considerable work on Broadway, including runs of Catch Me If You Can, The Bridges of Madison County and The Heiress.

Mindich was joined by other upstate New Yorkers among the elated cast and crew. First there’s actor Michael Park, who hails from Canandaigua and is a Nazareth College alumnus. He plays the role of Larry Murphy, who is the father of Zoe (Laura Dreyfuss), the romantic interest of Hansen (Ben Platt). Park’s figure becomes close with the title character, serving as a father figure to him.

And Jonathan Balcourt is the associate conductor for the production; he works alongside music director Ben Cohn, and they both take part as instrumentalists in the eight-person band. Balcourt majored in music education with a concentration in violin at Syracuse University. The former Onondaga Hill resident, a 2004 graduate of West Genesee High School, now lives in the core of the Big Apple as he pursues his passion.

After the post-Tony Award fervor quieted down, Balcourt chatted about the show during a phone interview.

How did you veer away from music education into where you’re at now?

I did my student teaching placement after the four years as an education major, but I found out about a musical writing graduate program at New York University. It’s a musical composition program geared toward theater. It was appealing to me, because it was something I had done before but didn’t know there was a program on it.

It was also the time of the banking collapse. I finished one year of the program before stopping but took job offers instead. Most of that program was about the connections and not the degree. A lot of the connections were enhanced based on the fact that I had the skills to back up what I said I could do.

Where did you look for work at that time?

I did a lot of regional theater around the country, and then I did a bunch of national tours. The biggest tour I had was as part of Book of Mormon for about two and a half years. That was my personal break into quote-unquote the industry.

Were these positions you had to audition for or will resumes speak more loudly? 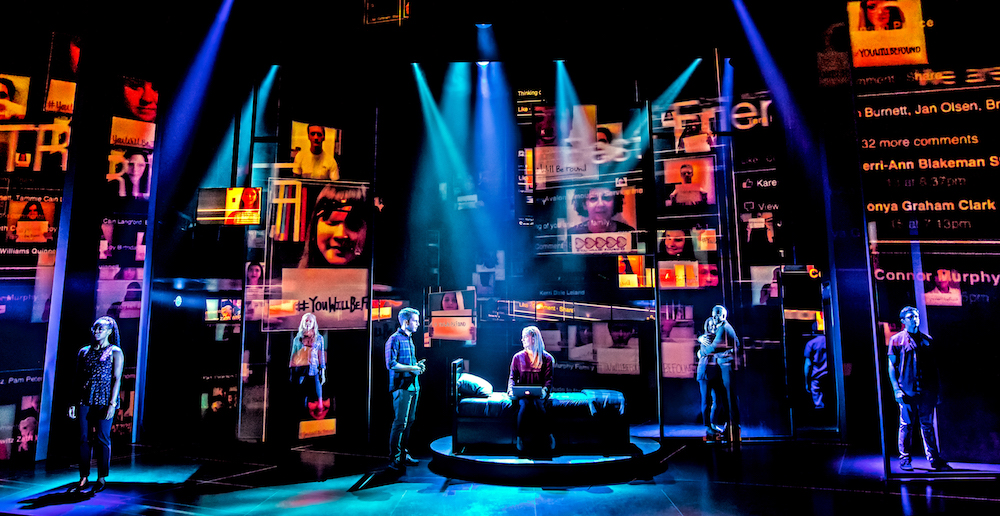 The “You Will Be Found” number from the Broadway musical Dear Even Hansen. Matthew Murphy photo

A little bit of both. I say, especially to younger people who want to get into music directing and playing for shows, you’re constantly auditioning by doing good work. It’s a small industry, even though it doesn’t appear to be. If you’re doing good work, your name gets around.

There was an audition process, but I was able to be invited to it based on the connections of people I’d worked with. An actor will stand in a line for eight hours just to sing a song to a casting director. It’s different for musicians. It’s word of mouth until you get an offer, which I had received. I said I was interested, they sent me music to learn and I played it for the musical supervisor.

You mentioned you played violin. Is this what you used to perform the score?

Actually, no, this was all for keyboard. The piano was always an instrument I focused on before the violin. But I didn’t want to be a classical piano player in college. That’s why I used the violin as a vehicle for my music degree and attended a program where I didn’t have to spend my entire time locked up in a practice room.

Musician contracts are open-ended. It’s great job security. I can stay here as long as the show goes on. I’m lucky to be in a show like this. Some shows may last six months and that’s it. We’ve already passed that and are selling tickets for a year from now.

What does your title of associate conductor involve?

My boss is the music director (Cohn). He and I are the two people taking turns conducting the show. Whichever one of us is conducting, we’ll be at the keyboard. We give cues by nodding our head, point to start players and conduct a little bit if we’re not playing. That’s the physical side of it.

There is a lot of business and managing personalities within your band and cast. It’s a lot of communicating. You have to be able to talk to and work with a large group and see what you can get out of them musically or as actors, but you don’t want to offend their choices and performance. This managerial side of things can’t really be learned in school. You get better the more you do it.

The musical director is responsible for the musical upkeep or general sound of the show. If something isn’t flowing right and a mistake is being made over and over, it’s his job to work with the actor. It’s kind of a thankless job to a lot of people, because if you’re doing the job well, it’s not noticed. You don’t really leave a show saying, Wow, that music direction was incredible. But it’s noticeable if the music and performance sound off. 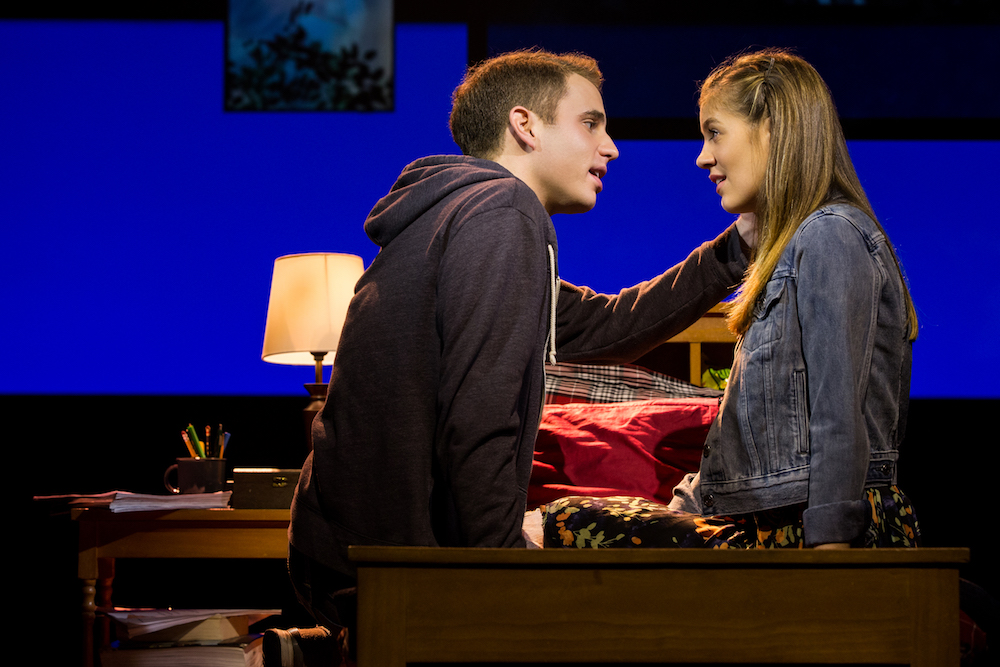 Do you prefer more intimate shows or larger productions?

It matters in terms of what’s serving the story. Dear Evan Hansen is a very intimate story about a boy and his mom and the family they interact with. It doesn’t need a large ensemble when compared to Wicked. This can be seen as more of a play with music. The story and the themes are so strong, and the music enhances it.

We’re pretty much a family backstage. Everyone knows everything about everyone, for better or for worse. At the same time, having such a small cast means they have to be much more musically proficient eight times per week.

Do you and the band feed off or have any leeway to play off each other or the actors?

Not really. We stick to the music. The last thing we want to do is distract the actors from telling the story. We give the same thing every night so they don’t have to worry about the music. The actors have the ability to say lines differently and play around and generate a reaction with one another.

With such a small band, are you in a pit?

What’s cool about this show, which is different than others, is that our band is on the stage. We’re on a platform in the back of the stage, behind the action. It’s a little strange, because normally as a conductor you’re able to make eye contact with an actor.

Being onstage enhances a show. It reminds the audience that the music is happening live. A lot of times while touring someone would lean over the pit, because the orchestra would be hidden. They’d realize that the music is not a recording.

What’s cool about this show is that there are several moving panels. We’ll be covered up for a moment while action is taking place, but then they’ll move away when a musical number comes on. 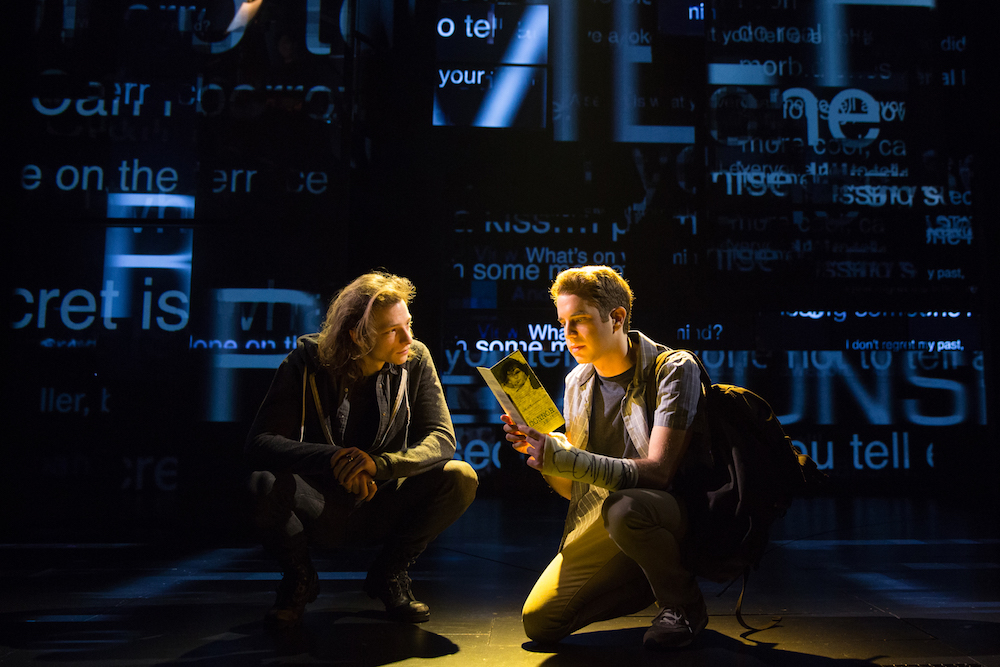 Dear Evan Hansen features a character with social anxiety disorder, which plays heavily into the production and the character’s desire for acceptance. Do you think this has raised awareness along with other issues?

Yes, and I hope it continues to do so. I recently met a woman who was interviewing one of our actors. She was starting a national program that deals with loneliness. She was saying that it’s a part of depression that’s not necessarily fixed by medication. The show deals heavily with suicide and themes of feeling alone. One of the big lines in the show is “You are not alone.” She believes that people need to be reminded of this.

People also make videos and other media with songs from our show to promote something or raise awareness. Recently the one-year anniversary of the Pulse nightclub shooting was passed. These four people who have nothing to do with our show used one of our songs to remember the victims. It’s amazing that something from this show, which doesn’t have anything to do with the shooting, carries the same message these people wanted to relay.

Does people’s use of copyrighted music from your show create an issue?

When it’s out there, it’s pretty much fair game. The music of the show has been published. Anyone can make a video on YouTube with it, but they can’t make a profit off of it.

Did you all expect to have the reception experienced at the Tonys this year?

There are a lot of great productions out there. Two great shows this year are Natasha, Pierre & The Great Comet of 1812 and Come From Away, which is across the street from us. The shows have a very similar reception from their audiences. Yes, they’re competitors, but I would have been happy to see either win. It’s great to see a musical succeed nowadays.

None of us expected a sweep like we got this year, especially how Hamilton swept the Tonys last year. It seemed like this year was going to be a lot more spread out. There were definitely surprises, but we’re thrilled.