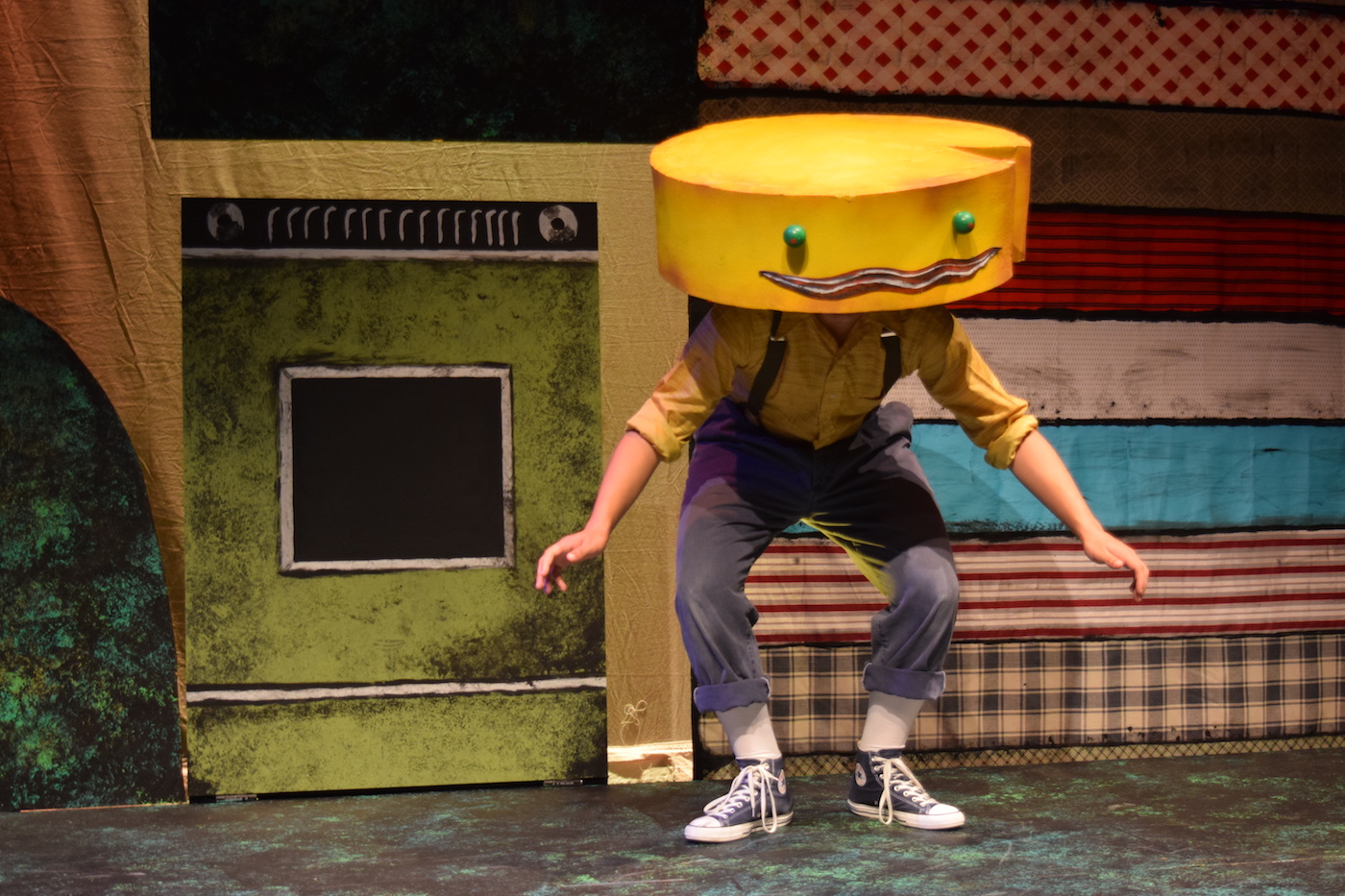 Acclaimed children’s author Jon Scieszka lets us in fairly quickly to the secret of his success. In his bestseller The Stinky Cheese Man and Other Fairly Stupid Tales, Scieszka demonstrates that he thinks kids are smart and don’t need to have things explained to them.

One of his updates of traditional tales is now titled “Little Red Running Shorts.” When Shorts (Kelsey Rich) learns she has to deal with a predatory Wolf (Tom Vazquez), she just sprints out of the story. Hey, a girl could get killed by such a beast. In the Gifford Family Theatre production, running through June 18 at Le Moyne College’s Coyne Center, the audience of first- to third-graders roared its approval.

Generating comedy by making variations on well-known children’s stories might be a well-known strategy, but Scieszka has more ambitious plans. While he respects the folk wisdom of tales like “Chicken Licken,” he also encourages youngsters to reject the cruel fates such tales sometimes force upon innocent victims. Consider the hapless Prince (Alex Petkopoulos), whose potential girlfriends are all expelled because they can’t feel a pea under all those mattresses. An irreverent Princess (Kelsey Rich) solves the problem by jamming a bowling ball into the same space.

Much as Scieszka respects children, stage adapter John Glore knows the audience lives in the short-attention span, post-internet age. The loudest applause in the entire show goes to the line, “She has 2 million followers on Twitter.” To tie the episodes together, a narrator named Jack (Killan Crowley) in a medieval-looking green hat encourages audience participation, like telling the kids that a cymbal will get clanged whenever the word “stupid” is mentioned. The audience never misses a cue.

Assuring the lickety-split timing is the tight direction by Terry LeCasse, who thrusts some of the action into audience, such as a tortoise (Killan Crowley) who zooms up the aisles like a road runner. Lindsay Quay Voorhees’ costumes and John Czajkowski’s sets render several humans zoomorphic, and nearly animals anthropomorphic. Perhaps Voorhees gets credits for the colorful prosthetics that produce the Stinky Cheese Man himself (Alex Petkopoulos), also a rapid runner and aisle-scooter. Stinky takes flight from the self-flattering fantasy that everyone wants to eat him when, in fact, they can’t stand his odor. The first lessons in the laws of attraction are learned in the first-grade cafeteria.

Another quality setting Scieszka and this production apart is a distinct archness: Call it metatheater. Stinky Cheese Man constantly refers to its own artifice, with scripted gags that break through the fourth wall. (“I can’t fake that: I’m a method actress.”) Although the origins of this aesthetic are in avant-garde theater, youthful audiences embrace it readily. When a humanoid cow flounces by, everyone in the audience knows it’s two people under a spotted white sheet — and no one wants to play the rear end. Here, the Cow’s Butt (Morgan Smith) rebels, pulls away from the head (Drew Gripe) and starts a dance step of her own.

In the most sophisticated sequence, two fairy tales of damsels in distress are run together as “Cinderumpelstiltskin.” The cruel Stepmother (Noelle Killius) now has more to do, and the two ugly Stepsisters (Alex Petkopoulos, Tom Vazquez) are in drag as both stories are deconstructed.

Gifford Family Theatre has long been a quality act, attracting some of our best local talents. The music director is Bridget Moriarty, a Syracuse University faculty member, while the cast is drawn from veterans of the Le Moyne College Theater Program, last seen on this same stage in the works of William Shakespeare, Pierre Corneille and Bertolt Brecht.