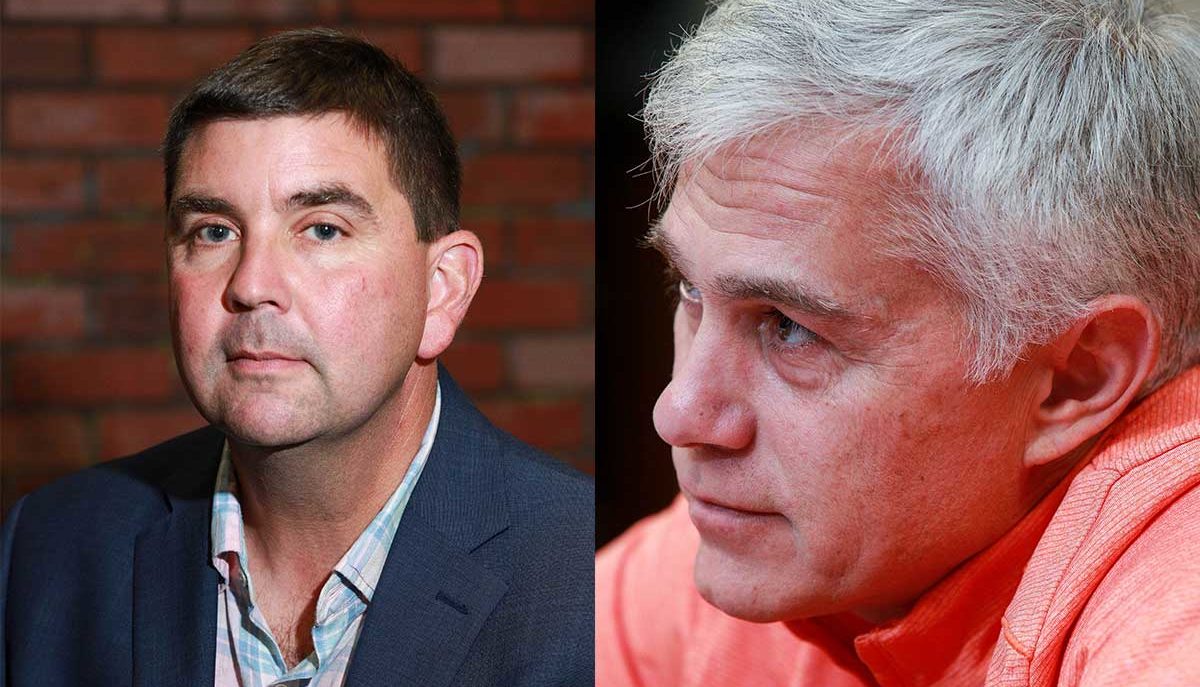 Neither Republican County Comptroller Robert Antonacci nor veteran Democratic schoolteacher John Mannion play the saxophone, which will leave an empty spot in political and cultural activities in Central New York’s 50th state Senate District. At the end of this term Republican John DeFrancisco, who currently occupies the district’s Senate seat, will be stepping down after 26 years, following 41 years of public life that also included seats on the Syracuse City School District Board and the city’s Common Council.

Fifteen years ago these pages reported Antonacci, a registered member of the Independence Party, approached Democratic Party county chair Bob Romeo to run for comptroller against incumbent Republican Don Colon after his own party had endorsed Colon. He lost, then won as a Republican in 2007.

This is Mannion’s first run for public office after 25 years of teaching biology and other sciences at West Genesee High School.

Whoever wins, however, will need to save space for DeFrancisco, who soloed on saxophone for the 1976 Wild Cherry dance hit “Play That Funky Music” on stage at Festa Italiana. “I was the white boy,” DeFrancisco reflected.

What is the legacy of state Sen. John DeFrancisco?

Robert Antonacci: There is nothing but admiration and respect for Sen. DeFrancisco. He was a straight shooter, but more importantly he was a gentleman. He was kind, but yet he told you what he thought. But he listened and he made informed decisions. One of the things I’m absolutely committed to in terms of his legacy is continuing the Senior Fair he has every September. It’s a wonderful event.

I think we’re similar in our style, in our honesty, even our brevity. I think we’re both fighters. We may have a little different style in getting to the finish line. But I’m honored to have the opportunity to replace him if the voters choose me. I think I’ll carry on his traditions just nicely.

John Mannion: I found Sen. DeFrancisco to be a strong advocate for the area, especially in the arts. And I hope to continue that legacy to make sure that we have an enriched culture in the area. I will say that at the end of his 26-year term we are left with slow economic growth and the fifth-highest poverty rate in the country.

If you win, what will you do about Route 81?

Antonacci: It’s the most important issue this community will face for generations. This is an opportunity for those advocates of the community grid to get what they believe is important for the city. Likewise, I represent many constituents who live in the suburbs that believe they have to have the traffic going north and south for commerce, for economy, especially those who live in Skaneateles, because of truck traffic, those who live in DeWitt because of the increased traffic that will go through on the diversion through Interstate 481.

Even though I don’t represent Salina, I think there will be an adverse effect on those businesses in Salina and Clay, which I do represent. The bottom line is I will carry out this district’s wishes, but I think this is an opportunity where we can all come together, and we will tell the politicians in Albany and Washington that we want a combined hybrid tunnel so that everybody gets what they want. Yes, it’s more expensive. No, I’m not a fiscal knucklehead. But we’re talking about a 70-year project and I think there’s a lot of risks on both ends.

Mannion: Coming at it from a scientific and economic look, while we might love the tunnel, and it would give us the best of both worlds, unfortunately when it comes to cost and logistics and cutting through infrastructure and a high water table, that might not be a possibility.

We have to give the grid a chance. I’m concerned about drive time, with access to the hospitals and the university could actually be improved, so I think there are some positives there. Whatever decision is made, we have to make sure that we keep the jobs and the contractors working in the area. That is the highest priority.

Development on the Near Westside got a boost from Syracuse University, then sort of died. How do you revive it?

Antonacci: Baseball. I want to revive Skiddy Park, to be a home of youth baseball, and for all city residents to use. We can’t allow a complete neighborhood of the city of Syracuse to die. The bottom line is this: We have to pay attention to the Near Westside.

Mannion: I grew up on Avery Avenue. Many times I would go through on my bike on the way to downtown, so I’ve seen it when it’s thriving, I’ve seen it when it dips, and I’ve seen its comeback, And I know right now we’re in limbo, and we need to make sure that that ball is picked up and run with, and that maybe to take the Westside Initiative and merge it with another organization that can keep it going. Revitalizing the Westside, one of our most impoverished areas, is very important.

If you win, what are you walking into in terms of partisanship?

Antonacci: Sometimes checks and balances are the best thing. I firmly believe that if the Senate goes from Republican to Democratic control, there’s going to be some not-so-good things that are going to happen to the taxpayers of this state. That being said, I am willing to work across the aisle to make New York state the best it can be.

And while I believe that we get shortchanged in upstate New York, we are the future of New York City. They lost a major financial services (AllianceBernstein), which moved to Tennessee. It’s not too long into the future with the change in technology that companies will start leaving; all that training can be done on an iPhone on a beach in Miami, or a cornfield in Idaho.

Mannion: We have greater polarization of the parties than ever before. That is part of the reason that I’m running: It has to stop. Unfortunately we’re living in a time where the parties are moving toward both ends of the spectrum, and most of us are in the middle. When we get through the election process, we can not think of it as us and them. That’s become worse and worse over time.

Although I do have a party affiliation we have to get in this together and work through real reform, especially ethics reform, to make sure that our tax dollars are spent prudently and our representatives are representing the interests of their constituents.

What is the upstate/downstate issue all about?

Antonacci: New York City has been able to survive with certain policies that work there, but don’t work in upstate New York. We have to recognize that the economy, the dynamic, the way of life, is completely different in New York City. New York City does benefit financially more than we do in upstate, such as getting our fair share of school aid. New York City students get more per capita than upstate students get by almost $300 per student. The whole state needs a property tax cap.

Mannion: I feel that I have a skill set that makes me a good negotiator and maintain relationships. Anyone who tags me as someone who would just kowtow to downstate politicians, that’s just political rhetoric. I wouldn’t do this if I was just a Democrat. I’m in it for Central New Yorkers, knowing that if I’m elected, there will still be a large group of constituents from this area that didn’t vote for me and I have to represent them as well.

Do you feel, as DeFrancisco did, an obligation to support the arts?

In my second career I think I could have been a pretty good actor. I was Joseph in the third-grade Christmas pageant at Our Lady of Pompei. I didn’t play a musical instrument because we couldn’t afford it. Everybody needs math and science, but the soul is the arts.

Mannion: I absolutely feel it’s an obligation. I watched what happened with the Syracuse Symphony Orchestra and that was a horrible loss. We’ve made a comeback there. I want children of all ages in this area to have an enriched culture, so I make sure I fight for that. Not that I’m too concerned with party politics, but if we’re looking at the dynamics of the Senate and what the future may hold, I plan to be in the majority and I believe that will help assure that we keep bringing in funds for the arts to this area.

Do you play the sax?

Antonacci: Unfortunately I don’t¸ but my second-best option is my daughter plays the clarinet. She was on the all-county band. She’s my substitute.

Mannion: My children play the clarinet, the piano, the baritone and the trumpet.