Craftivist exhibit by 19 artists explores the fabric of life

She took human hair, adhered it to wire and built a small, fuzzy structure representing a house at 1317 Charbonnet St. Similarly, the artist assembled hair, wire and a fiberglass screen to make a tiny building that evokes a home at St. Maurice Avenue and Chartres Street. In this piece, Schwerd draped the hair over the house’s exterior; the hair stands in for trees ripped out of the earth. 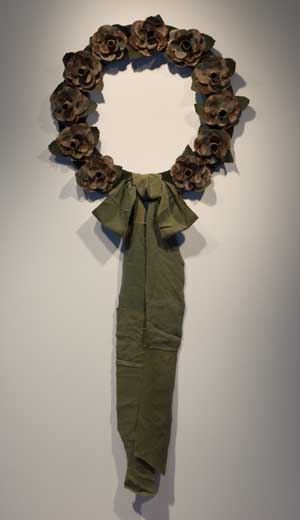 Their flowers the tenderness of patient minds…(Barb Hunt)

At the top, she arranged pieces of clothing like a garland of flowers; at the bottom, a pair of pants hangs down. The work’s title is bitterly ironic. In the Democratic Republic of Congo’s eastern region, armed conflict is commonplace, and murder and rape are epidemic. Civilians fear both government troops and the more than two dozen militias operating in the region. “Congo Roses” is part of a larger body of work dealing with war and violence. 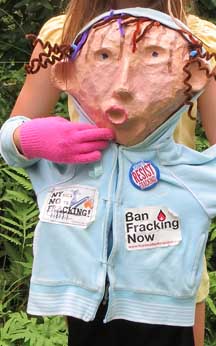 And three artists argue against fracking in upstate New York and other places.

“No Fracking in My Backyard,” by Mary Louise Gerek, is a quilt full of green, brown and blue. Vizma Leimanis, an eighth-grade student, made “Thea, The Anti-Fracking Puppet” during a summer camp run by Open Hand Theater. Sharon Bottle Souva’s quilt, “Splitting the Land,” communicates love of the countryside and anxiety about its future. Her piece is neatly divided into nine segments, suggesting that the landscape could be torn asunder.

Elsewhere, the exhibition presents quilts whose makers touch on violence in a visceral way.

Amanda Gross’ “Cupcakes” depicts a woman handing out unconventional baked goods. Each of the cupcakes is decorated with images of dollars wrapped around hand grenades.

Sally Dutko’s “Sighting In: A National Shame” focuses on the 2012 shooting that took place at Sandy Hook Elementary School, in Connecticut. It’s a mixed-media piece featuring images that reference childhood: a tiny piece of cloth, a school bus, mother-child figures, a character from a popular children’s television program. Throughout the quilt, Dutko has shattered tiny crosshair patterns.

Spoken Threads has other works demonstrating the styles present in a 19-artist show. The pieces include Ann Cofer’s “Quilt,” with its mix of cloth and ceramics, and Emily Dvorin’s “Green Is More Than a Color,” a basket surrounded by green fringe meant to resemble grass. In making the work, she recycled plastic bags and other items.

In “Southside Angel,” Vanessa Johnson’s elaborate work has three segments and encompasses many items: buttons, cowrie shells, cotton cloth, small pillows covered with colors emblematic of African cultures, an image of an angel blowing a trumpet and “soul bags.” They are tiny bundles filled with earth from the South Side Syracuse neighborhood. 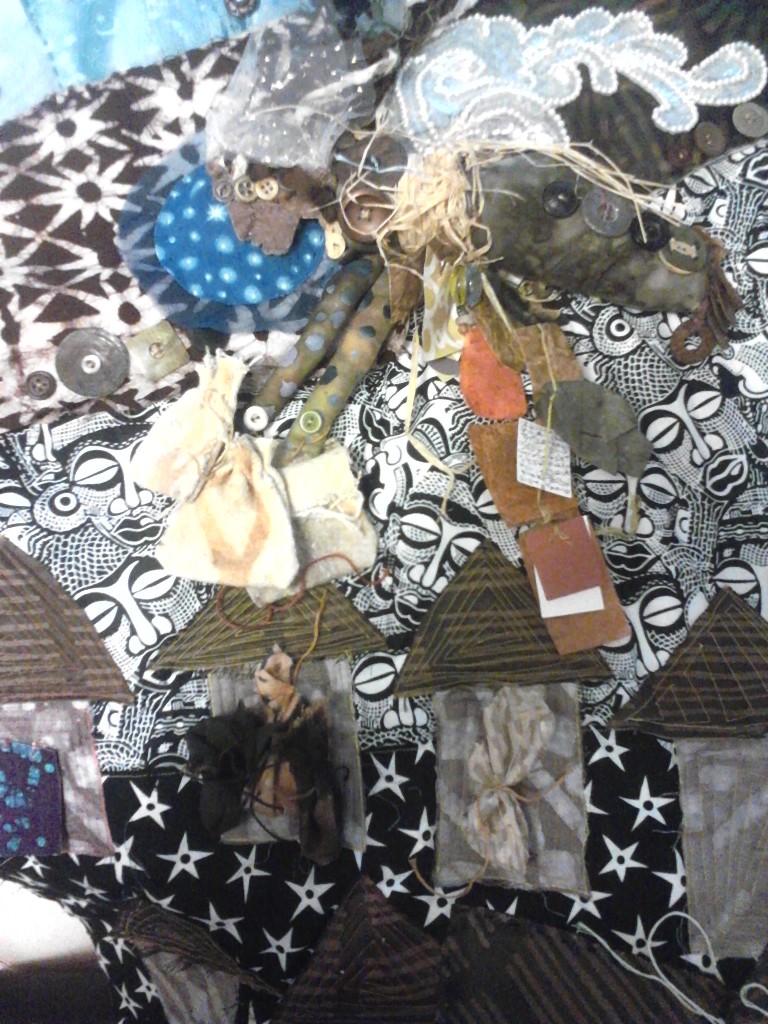 This piece commemorates Syracusans whose lives were cut short by violence. It also references Johnson’s longtime interest in youth, alternatives to violence and promoting awareness of African history and culture. She founded Africa Bound, a program that coordinates trips by young people to Africa.

A series of postcards on a gallery wall documents a public-art project initiated by Syracuse artist Mary Giehl. She met with knitting groups who made scarves, hats and mittens. They were placed into bags and distributed at public sites: parks, Centro bus stops and many others. Each bag included an item made by the knitters and a postcard.

The postcards on display at ArtRage detail public response in several ways.

They reveal that the items were found at locations such as Eastwood, Jamesville and the United Baptist Church, in the Westcott neighborhood. They present a range of communication, from a simple message of thank you to longer texts. Finally, the postcards make a fundamental point: People did respond to something out of the ordinary.

Spoken Threads is different from most shows at ArtRage in that it concentrates on a particular medium. At the same time, the exhibition celebrates fiber artists who play with that medium and incorporate various themes into their work. It’s a group exhibit with a unifying element, one that works very well.

Stories in Stone
From War to Warhol
To Top