In an era of Auto-Tune and bubble-gum pop, sugary image over solid substance, sometimes the masses get hungry for something more satisfying. And every once in a while a band comes around that can fill their bellies. This year, the 33rd annual M&T Syracuse Jazz Fest will feature one of those groups: Lake Street Dive, slated to perform Saturday, July 18, 7:45 p.m., at the Onondaga Community College campus. 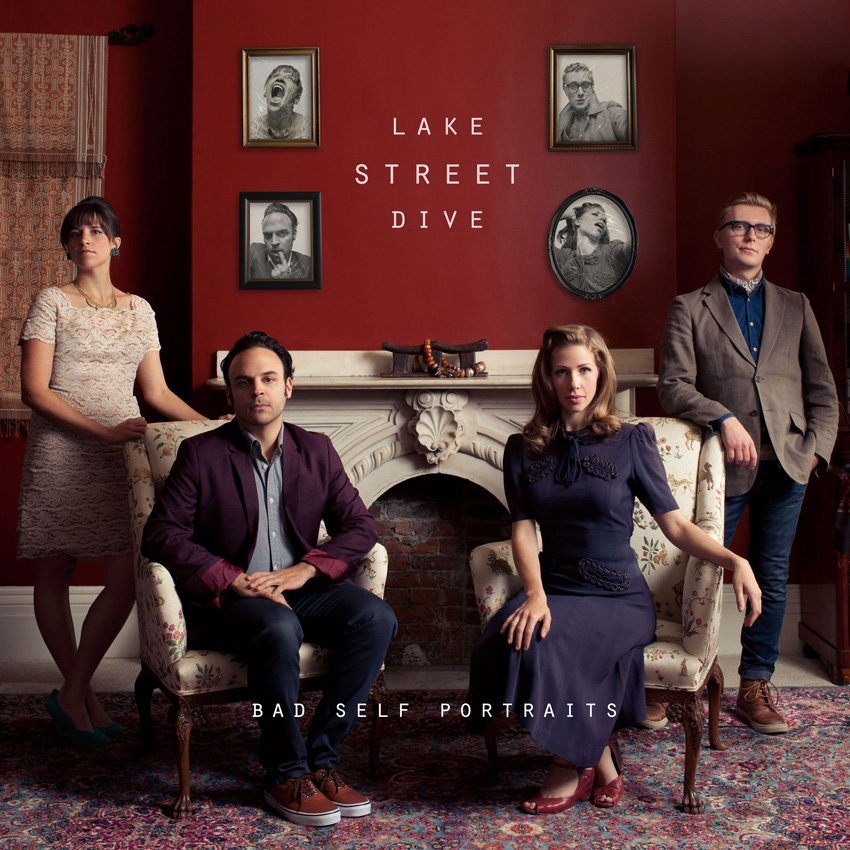 This four-piece troupe of New England Conservatory of Music grads is a pure mix of old-school sensibility with modern swagger. Pairing the soul of 1960s-era Motown and Stax with fresh interpretation, they’ve managed to combine the greatest attributes of multiple genres without losing themselves in the effort.

Vocalist Rachael Price, bassist Bridget Kearney, drummer Mike Calabrese and trumpet/guitar player Mike “McDuck” Olson started playing together in 2004. But it wasn’t until May 2012 that they experienced an overnight success, when the group recorded a YouTube video covering The Jackson 5’s “I Want You Back” while gathered around a single microphone on a street corner in Brighton, Mass.

The video garnered more than 3 million views and caught the attention of producer T Bone Burnett, who asked the group to perform at a December 2013 music event in New York City. They’ve since played in more than 175 different cities in almost all 50 states and eight countries, appeared on talk shows hosted by David Letterman, Conan O’Brien and Ellen DeGeneres and were named Rolling Stone magazine’s Best New Band in 2014.

Bassist Kearney won the Jazz category of the John Lennon Songwriting Contest back in 2005. The award of cash and 1,000 CDs allowed the band to create the 2006 debut disc In This Episode. Since then, Kearney has been steadily writing songs, with Lake Street Dive’s next album already recorded and ready for release in early 2016. 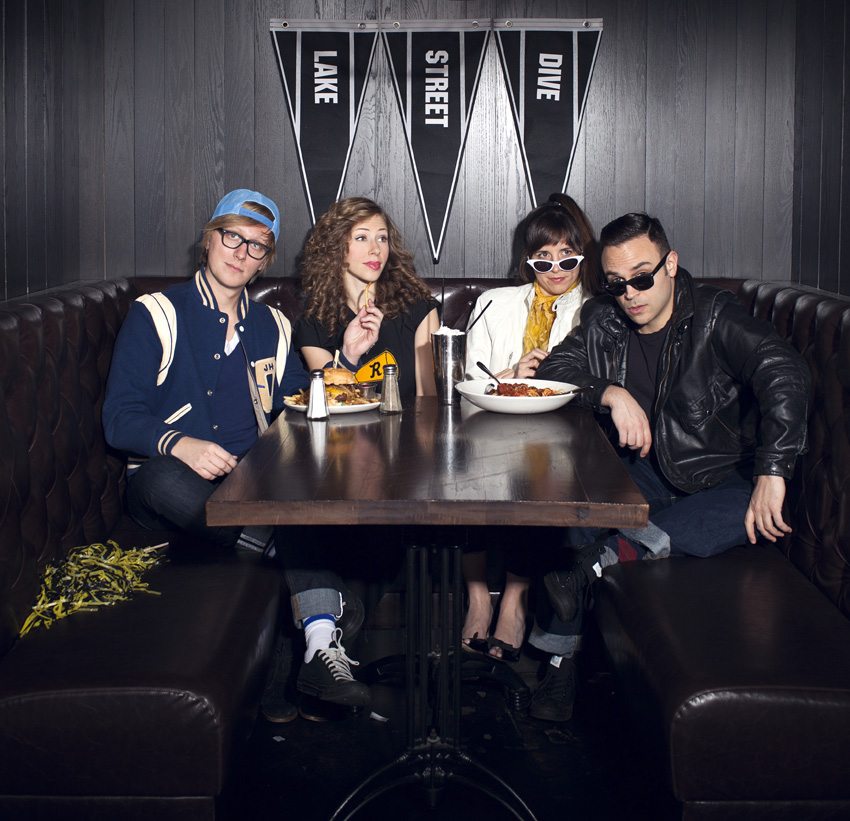 Kearney is also excited about the band’s time slot at this weekend’s Jazz Fest. “The fact that we’re opening for Aretha Franklin is completely insane,” Kearney declares, “and I don’t think any of us really believe it’s going to happen! She is a hero to all of us for sure, and objectively one of the greatest musicians in American history. I don’t know if I’m more excited to play before her, or just to see her show as a fan.”

You all come from very different places around the country. How does that affect the music?
I don’t think our geographical upbringing has too much to do with the sound of the band, but certainly the music we were raised on does. We all come from families that are big on music and have a lot of common ground in our musical heritage: The Beatles, Paul Simon, Raffi.

You got into music at an early age. Did you aspire to be a professional musician early on?
I started being involved in music very early, thanks to my parents. I took piano lessons starting at age 5 and sang in the church choir before that. I had older siblings and they were doing these things before I was old enough to and I remember begging to start! When other kids were saying they wanted to be firemen or astronauts, I was always saying I wanted to be a rock star. So yeah, it was a pretty direct path to this life for me, although there were bumps along the way.

I love drummer Mike Calabrese’s explanation: “We want it (the music) to sound like The Beatles and Motown had a party together.” Tell me about your love for that music and how it is as an artist to put those influences into your songs, but still make them your own.
I’d say the key words in that sentence are “Beatles,” “Motown” and “party!” Since our inception we’ve wanted to be a dive bar band (hence the name Lake Street Dive) and we wanted to make music for people to dance and have a good time. The Beatles’ music and lots of American soul music from the 1960s (Motown, Stax, Muscle Shoals) is richly layered with a musical language that we love to dissect and reassemble for our own purposes, and hopefully make something new and fresh out of. It’s music that we all love, so it’s the first place we go when we’re looking for inspiration, but we always try to put our own spin on things.

Tell me about the writing process and how it works.
Generally, we all write the foundations of our songs in solitude. That’s the most personal part of the process, so we like doing it alone. Then we bring the songs into the band once we’ve got the lyrics, melody and chordal foundations in place and the band works its magic on that. That part of the process can take from hours to years to complete!
Some songs come together really quickly and have very obvious roles for each member of the band to play, and others we have to experiment a lot more with. But it’s always worth it to struggle with those songs because that’s how we learn to play together in new ways. 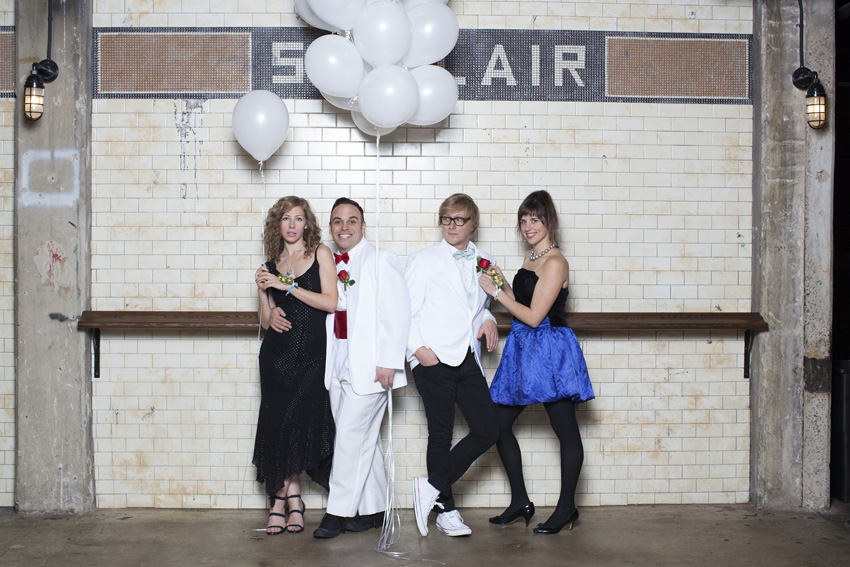 Your rise was a fast one when it happened. What was that whirlwind like?
Having a nine-year foundation of playing together was a huge asset to us when we started playing much bigger stages because, quite simply, we knew the songs really well. So, for the most part, we could just kick back and enjoy the ride. Of course, you’re freaked out to play for musicians like T Bone Burnett and Elvis Costello and Joan Baez, and all these other amazing musicians who were there that night, too (in December 2013). But we never had to question what we were doing musically or whether we believed in the people we were playing with. We’d had nine years to build that up in a genuine way, and we all trusted each other and knew we could do it.

What was your key to stepping up in the music business?
Our musical style and instrumentation is pretty different from any norm, which makes people remember it. Also, Rachael is a real mind-blowing singer and performer, so that helps!

Lake Street Dive is named for a Minneapolis strip of dive bars, where you honed your sound. How did that experience shape you as artists?
Playing in bars around Boston in our early years really helped us learn how to engage a room. Especially in the early days, the people at the bar were just out to drink and hang out with their friends, so you really had to work to get them to turn their heads. That was when we started adding background vocals. Because one person singing something is cool, but four people singing something is way cooler.

What prompted you to take on a rigorous touring schedule? How did it translate into your performances?
Our live show has always been at the center of our craft. From dive bars to big theaters, it’s where we really shine. Also, there was a long delay in putting out our last album Bad Self Portraits because of contractual issues, so there was about a year and a half after we made it where live performance was the only way people were going to hear those songs! How old-school is that? By necessity, we were basically going door to door, town to town, with our songs saying, “Hey everybody, we can’t put out an album right now for reasons that are beyond our control, but we’re still here!” 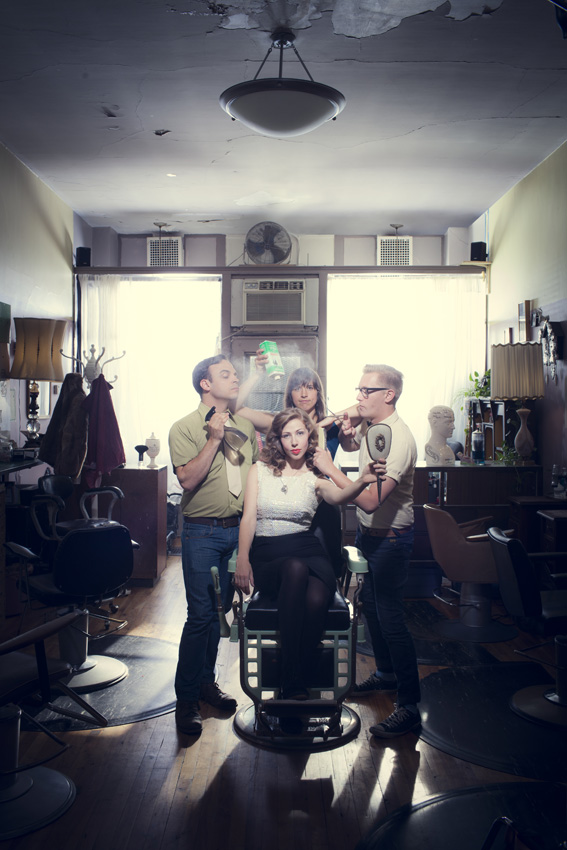 You all spend a lot of time together. How do you maintain good relationships?
We weren’t all friends before the band started, but we really enjoy each other’s company, and if that weren’t the case, I don’t think we would have made it this far. Now that we spend more of our time together than ever, we’ve had to learn to take time away from each other on the road to avoid overload. We each have our own solitary habits that we enjoy taking time for: running, reading, meditation, shopping. That “me time” is pretty vital for our sanity. And we talk about our feelings a lot!
It sounds cheesy but the thing that kept us going through our leaner years was always our friendship. Even though we weren’t making money at it, or really developing much of a fan base, it continued to be fun and exciting to all four of us to get together and make music, so we just kept doing it! And eventually success sort of came to us on our own terms. Because it wasn’t about money or popularity for us, we never had to change our sound to something that wasn’t exactly what we wanted to make.

What advice do you have for aspiring musicians?
Be yourself! Figure out exactly what it is about music that you love the most and follow that.

What do you think is the biggest mistake aspiring bands/artists make?
Drugs? I don’t know . . . I guess just chasing any goal in the music industry that isn’t music itself is the biggest mistake. It’s such an unpredictable business that if you’re not in it for the music itself, there are no guarantees. If you’re in it because you love music, you know you’ll be happy.[snt]

Buckwheat Zydeco (7:45 p.m.): Born in Lafayette, La., in 1947, Buckwheat Zydeco started playing organ and backed up musicians Joe Tex and Clarence “Gatemouth” Brown as a youth in the late 1950s. In 1971 he formed Buckwheat and The Hitchhikers and joined Clifton Chenier’s Red Hot Louisiana Band as an organist in 1976. Since then, he’s shared stages with Keith Richards, Robert Plant, Willie Nelson, Mavis Staples, David Hidalgo and more.

Wynton Marsalis and The Jazz at Lincoln Center Orchestra (9:30 p.m.): As a composer, bandleader, educator and musician, Wynton Marsalis has performed and composed across the full jazz spectrum. He’s created music for quartets to big bands, chamber ensembles and symphony orchestras. At 17, he was the youngest musician ever to be admitted to Tanglewood’s Berkshire Music Center, and he attended Juilliard in 1979. He has released 70 records that have sold more than 7 million copies worldwide, won nine Grammy Awards and in 1983 became the only artist ever to win Grammys for both jazz and classic works.

Aretha Franklin (9:30 p.m.): The first woman ever inducted into the Rock and Roll Hall of Fame continues to be known and regarded the world over as the “Queen of Soul.” Franklin’s six-decade legacy features classics including “(You Make Me Feel Like) A Natural Woman,” “Think,” “Chain of Fools” and more. She’s been awarded the Presidential Medal of Freedom and is an 18-time Grammy Award winner. She also headlined the 25th annual M&T Jazz Fest in 2007.