Creative dishes and drinks are the lures at bc Restaurant.

Editor’s note: Local Flavor is a feature produced in cooperation with advertisers in the Syracuse New Times. 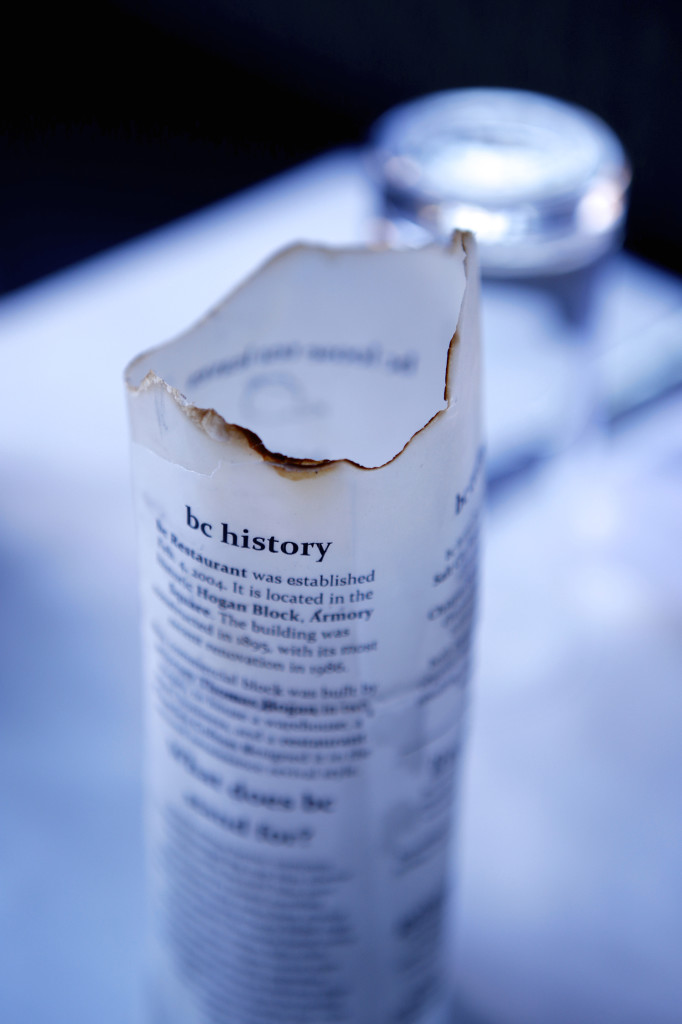 Being no stranger myself to bc, I arrived with some very willing additional diners on a cold Monday night, and we settled in for some fun and grazing at this cleanly decorated, modern establishment.  Monday nights are SIN Nights, meaning half-price on beverages and tastings for all service industry members. Despite arguing without conviction that we served people, too, we didn’t qualify, as bc is trying to do something nice for the folks who work hard in the restaurant/bar, hotel and beauty industries, including the artists and musicians who show or perform their work there, too. Many Mondays will also feature tastings from local purveyors, brewers and distillers.

Our contact for the night was bar manager Maria Cannon. If you want a true Manhattan-type mixology experience, seek out Maria. She loves to come up with new drinks, like the “Bacon and Egg,” for which she infuses whiskey with bacon. The bacon is removed, of course, but the goodness remains. Or the “Movie Theater Popcorn,” not just a rum-and-coke cocktail, since the rum is infused with popcorn and butter.

Neither of these was available for us to try the night we were there, but what could be wrong about anything flavored by bacon or butter? Nothing, said the girl who loves bacon and butter.

The boys in the group started with gin martinis. Maria had them try Blue Line gin, made in the Adirondacks by Lake Placid Spirits and embodying the flavors of the forest from the white pine that is used to make it. Per the order, it was served up, dry and dirty with a gorgonzola-stuffed olive. It was reportedly very satisfactory.

Jim said, “The transition from gin to wine is seamless,” so in spite of not understanding what that meant, we let our accidental sommelier pick a red wine with lots of tannin, and he did well. The William Hill cabernet sauvignon from the central coast of California was outstanding, but what you have to try is a sip of the lobster bisque immediately followed by a sip of this wine. The combination was incredible.

A note about the lobster bisque: That soup can often taste like flour or like cream. This rendition tasted like lobster with drawn butter sipped by the seashore on the coast of Maine. I kid you not. 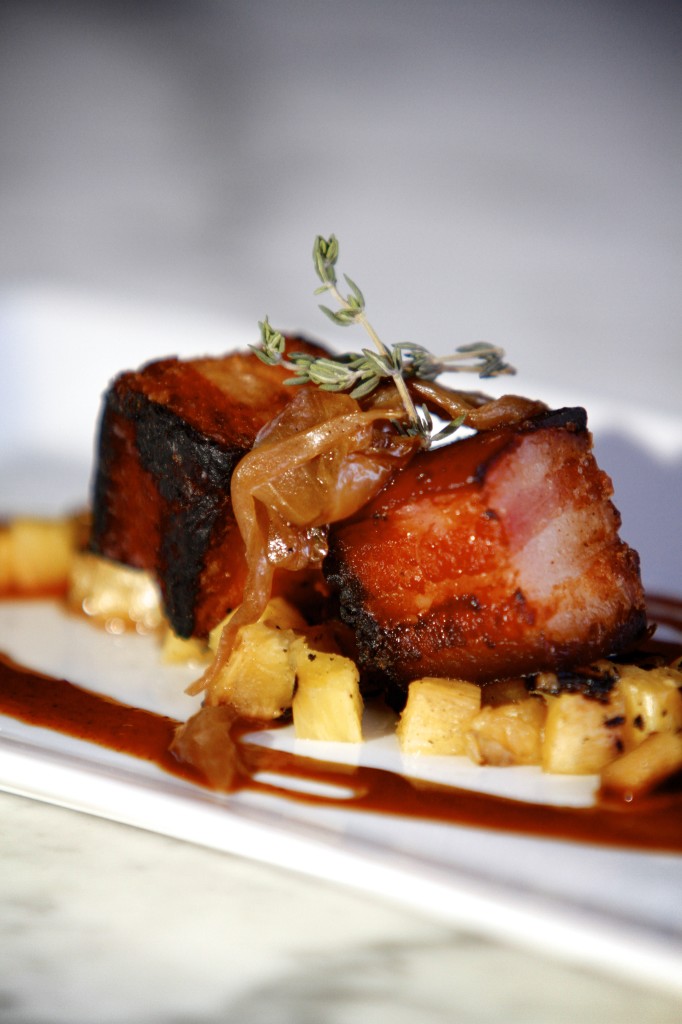 We made our selection of three appetizers based on the recommendation of our able server, Mike Manning. Don’t hesitate to ask him what to eat as he is able to describe the dish down to the number of ounces of protein that will be served, a true professional.

We started with a bc staple: duck wings, which were crispy and slathered in a blackberry barbecue sauce. They require hot, moist towels for cleaning up afterward, which thankfully were offered.

We tried the candied pork belly, served with pineapple, caramelized onion and a molasses drizzle. The sole objection to this dish came from my husband, who complained that Mike looked only at him every time he said “pork belly.”

Our final treat, lump crab with avocado fries, needs some explanation. Turns out it is a cold crab salad simply prepared with a lime accent and accompanied by slices of avocado encrusted with corn meal and lightly fried. It was a tasty and different starter, for sure. 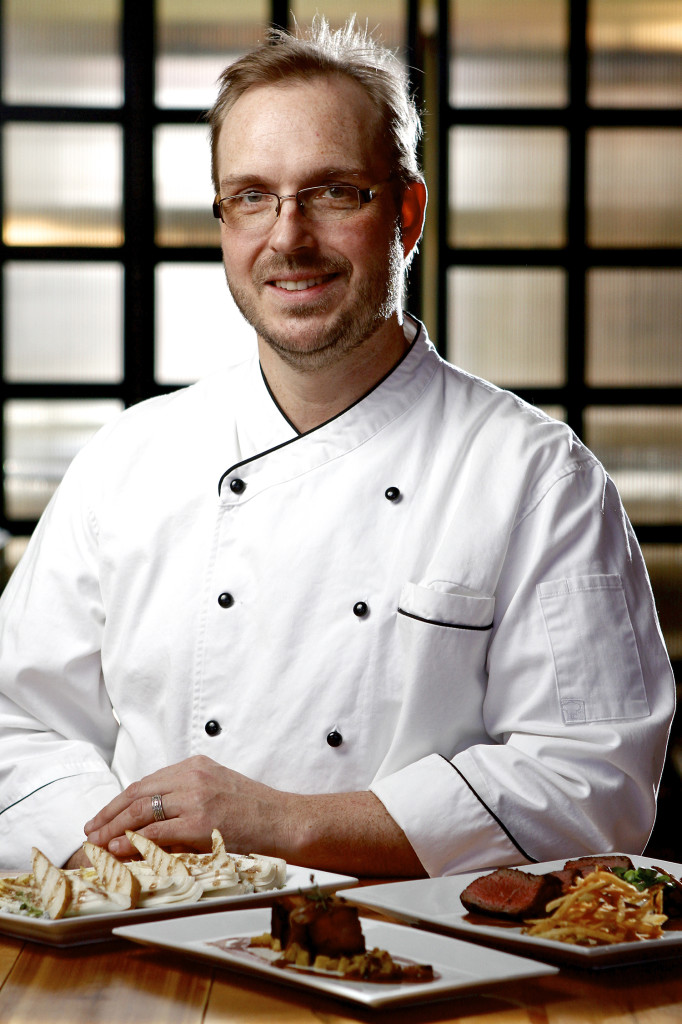 Now don’t get too, too excited to try all of the dishes we enjoyed, because the menu changes regularly, but on the night we dined, executive chef Gregg Marsh outdid himself. My husband had the roasted rack of lamb served with rice and beets. Jim had the bacon-wrapped filet with gorgonzola mashed potatoes and green beans. Both of the meats were cooked appropriate to order.

Patty got the crispy-skin salmon served over an Israeli couscous combined with carrots and a minted pea puree. I read somewhere in my travels that mint is the new basil, but whatever, it was tasty, too. Patty said the crispy crust added much texture and taste to the fish.

Predictably, I opted for the scallops, a favorite, which are given a different preparation every night. Mine were served over risotto with a subtle but sweet maple flavor.

As is often the case, we cruised into dessert too full for words. Sarah Pardee, bc’s pastry chef, made all the desserts, but we could manage to try only two among the four of us. The apple crisp was all apples and nuts, and if you love nuts, you are going to love this. The pumpkin cheesecake was more like a mousse and served with pepita (pumpkin seed) brittle offered as a crunchy contrast to the creamy pumpkin. 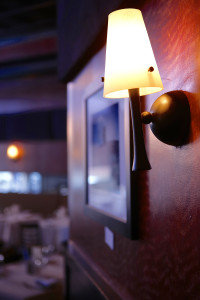 We tried to leave at that point, we really did, but Maria wanted us to try a shot of her “hot chocolate.” Well, it’s not hot, it’s “hot,” meaning spicy. The weather outside was no longer frightful after that drink.

Another event that might warm beer lovers during cold winter nights is “Growler Thursdays.” Bring your own beer from 5 to 9 p.m.; bc will sell Middle Ages brew along with homemade pretzels, hot and chewy, served with spicy mustard. Jim quipped that it was one “hoppening” event. That Mike and Maria were willing to put up with us at that point was a true testament to their professionalism.

Mondays through Thursdays, 5 to 9 p.m.
Fridays and Saturdays, 5 to 10 p.m.
Reservations can be made by phone or online.