When Mike Marcus’s job was transferred from Florida to Syracuse, he and Will Chisolm left behind their suburban home.

“We had the pool, the half-acre lawn, the house in the suburbs. I don’t miss anything,” Chisolm said.

Instead of having a lawn that grew so fast in the Florida heat that needed mowing twice a week, Chisolm and Marcus wanted to spend less time maintaining their home. And they weren’t interested in snow removal.

“We wanted to not even have to buy a shovel,” Chisolm said. “It helps we have underground parking. We can take the elevator straight up to the courtyard. We don’t have to shovel out.”

They moved to Center Armory, a retail and condominium complex in the heart of Armory Square. For two years, they lived in a two-bedroom, 1½-bath, 1,200-square-foot apartment until their current home went on the market. 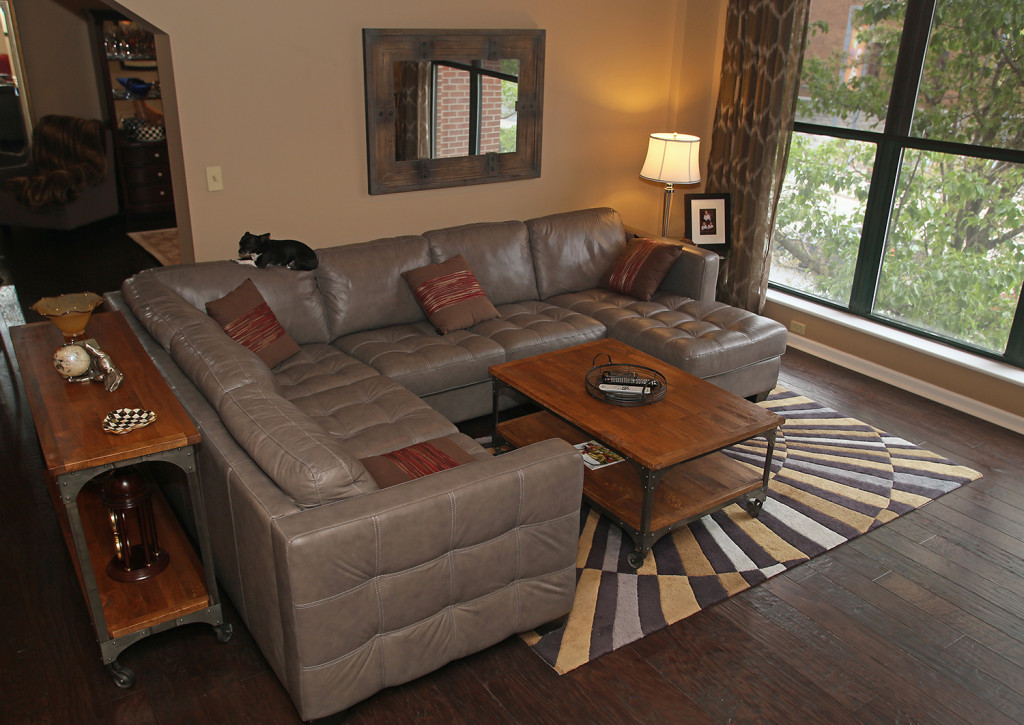 The three bedroom, 2½-bath condo has 2,400 square feet of space. It’s the only double unit in Center Armory. The unit has floor-to-ceiling windows in the living, dining and bedrooms that face the Milton J. Rubenstein Museum of Science and Technology.

They kept the first condo and rented it out.

Center Armory was built in the mid-1990s, and the condo they bought a year and a half ago needed some cosmetic work.

“It was kind of dated. We brought it up to date,” Chisolm said.

They kept the kitchen cabinets, but added granite counters that match the tile backsplash. They added a marble counter and new sink in the master bath. They ripped out the carpets and put in dark oak floors throughout. They replaced the lighting fixtures. 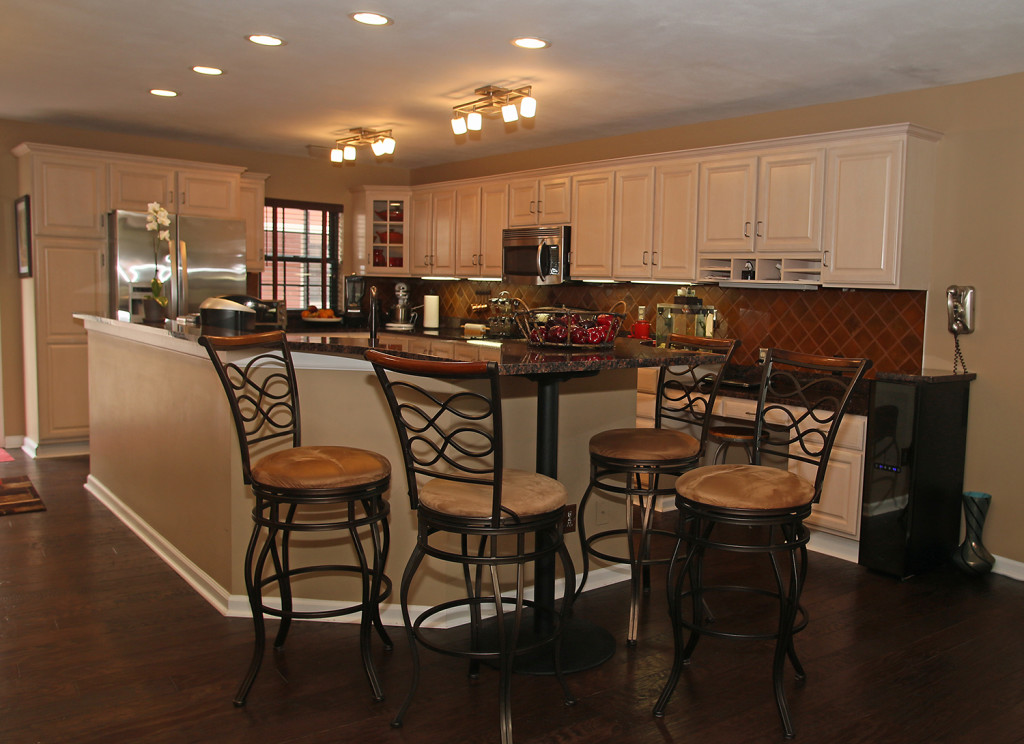 The homeowners of the double unit in Center Armory updated the kitchen with granite counters. Photo by Gloria Wright | Syracuse New Times

“We like to find something we can make better, to make it kind of a project,” Chisolm said.

To keep the building’s look symmetrical, the original owner kept the second front door. From the outside, the condo looks like two units. The second door opens into a rare space in a condo: A full laundry room with a utility sink. The first door opens into the kitchen with a dining room beyond. To the right is a living room with stairs to the third floor. At the top of the stairs is a loft seating area and three bedrooms. 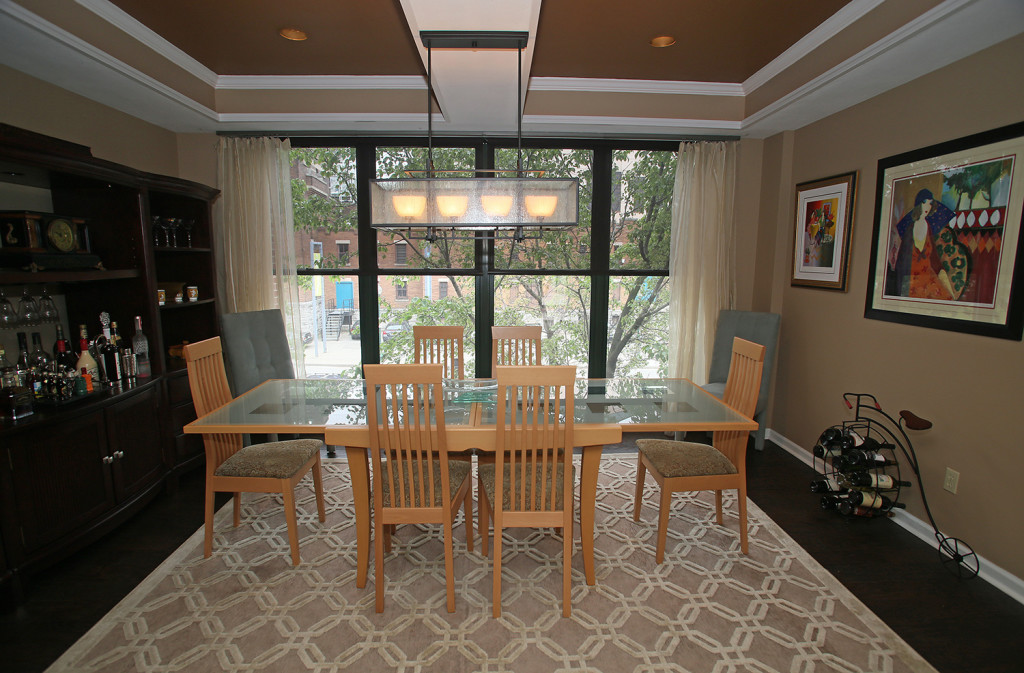 The dining room has floor-to-ceiling windows with views of the Milton J. Rubenstein Museum of Science and Technology. Photo by Gloria Wright | Syracuse New Times.

Chisolm works from home, and uses one of the bedrooms as his office.

Center Armory condos are on the second and third floors, above the street, and open into a shared courtyard.

“So even though you’re downtown, you get to escape up here,” Chisolm said. 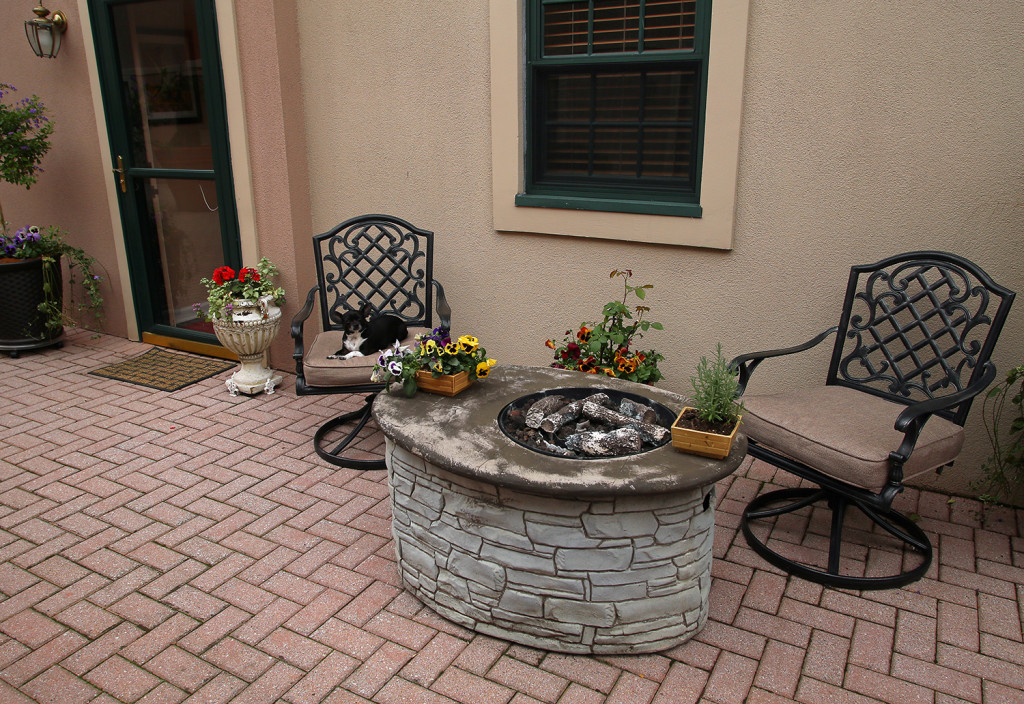 The homeowners have a propane-fueled firepit in the courtyard in front of the Center Armory home. Photo by Gloria Wright | Syracuse New Times.

Their condo faces the MOST, so it doesn’t get the noise from Walton Street. But the point of living downtown is the activity.

“We just join in. That’s what we do,” he said. “When you live downtown, you tend to know everyone. You know the people who own the shops and restaurants. You meet people walking the dog.”

Barring another job transfer, Chisolm and Marcus plan to stay in Center Armory.

“If we stay in Syracuse, we’re not leaving here. We have no desire to live anywhere else,” Chisolm said.