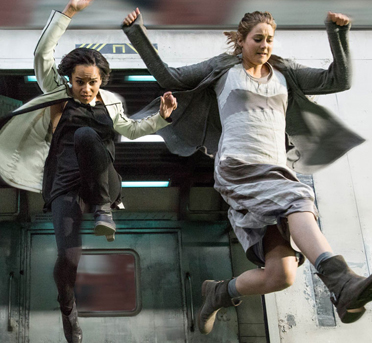 Chatty fans of the novel don’t help the atmosphere much

Your teen grows up to be smart, compassionate and brave.

Any and every parents dream, right?

Not in “Divergent,” the dark and complicated science fiction thriller based on a series of young adult novels by Veronica Roth.

In this post-apocalyptic Chicago, you best only be one of those three. Throw in two more factions, and the citizens must live and work with their own kind. There’s Erudite, the smart ones; Abnegation, the selfless ones; Dauntless, the brave ones; Candor, the honest ones; and Amity, the peaceful farming ones.

Beatrice was born into a family of Abnegation, and the story starts with she and her brother facing the testing that tells each teen citizen which group they belong in. Of course, each has one night after hearing the results to consider what group they want to join, and the decision if final.

Those who’ve read the works of Roth already knew this going in. And several of them in our vicinity during a crowded Sunday matinee at Destiny USA felt compelled to show off that knowledge by talking about plot points just before the onscreen twists and turns.

Let the screenplay by Evan Daugherty and Vanessa Taylor and direction of Neil Burger sink in, will you, please? And let us decide if the steady work of the film’s unabashed star, Shailene Woodley, and her male lead, Theo James, is quite enough to carry everybody along for the ride, including us older folks in the crowd who haven’t read the books.

No doubt, Tris — she shortens her name when asked by Dauntless instructor Four in a moment of decision — has plenty on her mind. While taking the test, a worried proctor tells her she’s really a Divergent. That means she carries the trait of more than one faction.

And this, as it unfolds, could be a fatal no-no.

There’s plenty of evil within the hearts of rulers of some factions, and peace is threatened.

Two veteran actresses, Ashley Judd as Tris’ mother and Kate Winslet as a high-ranking Erudite, amp up the drama.

Am I interested enough in Divergent escapades to see sequels?

Maybe. Maybe not. On cable, probably. I need another faction to join. Call me Ambivalent.