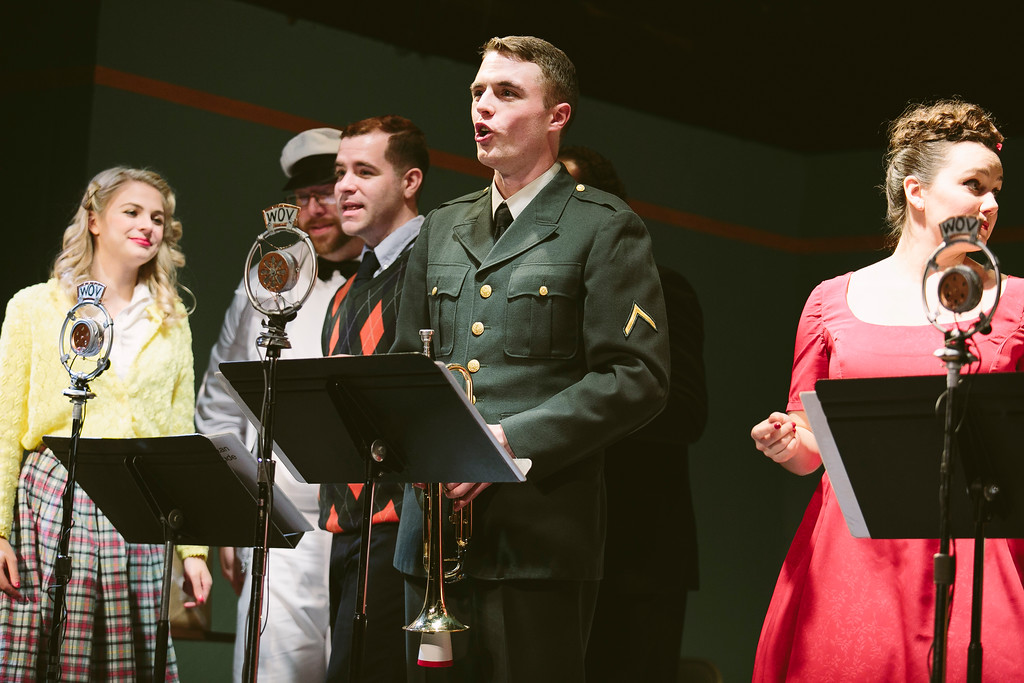 It’s a snowy night in New York City, Dec. 21, 1942, as the live action radio hour of the Manhattan Mutual Variety Cavalcade goes on the air, broadcasting from the seedy studios of radio station WOV. It is the golden age of the American popular song, when Gershwin’s “Love is Here to Stay,” Harold Arlen’s “That Old Black Magic” or Rodgers and Hart’s “Blue Moon” are heard every day.

As reprised in Walton Jones’ The 1940s Radio Hour, running through Saturday, Dec. 16, at the Central New York Playhouse, everyone also knows the menace of World War II after a year of combat. And we know that the world of make-it-up-as-you-go artistry would soon be blown away.

There is no real plot, only the drive to get the broadcast on the air, then over and done. Neither is there a hero, anti-hero or protagonist. We see the characters without picking a favorite. Some are really talented, others are just boastful.

Soon we realize that the tallest member of the cast, Clifton Feddington (Matthew Green), is doing most of the heavy lifting. He’s the general manager in a time-sensitive enterprise plagued with laggards, so he has to keep cracking the whip. This requires working closely with the self-important barking manager, Lou Cohn (Keith Arlington), who also controls the sound effects.

Clifton is also the custard-voiced on-air announcer, which makes everything he says, like giving the station’s name, sound like a smarmy commercial. The cast and company look too young to remember those voices, but older members in the audience know that Green hits the mark. He’s also the baritone lead singer in the rousing opening number, “Chattanooga Choo Choo.”

As the others flood into the studio, several singers are introduced as types, like young Connie Miller (Hali Greenhouse), a teenager with Veronica Lake-styled long blond hair, or curly-topped soubrette Ginger Brooks (Jackie Bleich), who chews gum like a mixmaster. The roles get fleshed out with fuller characterizations during the second act under Patricia Catchouny’s direction.

We learn, for example, that the crooning Sinatra-wannabe, Johnny Cantone (Eric Feldstein), was a welterweight fighter and has a wife at home named Angel. Dressed in a tuxedo, Feldstein gives Johnny a distinctive style, and sets him apart from the pack. There has also been something between him and redhaired singer Ann Collier (Leila Dean), which must be on the wane as Johnny is making noises about breaking out to Hollywood.

This behind-the-microphone tension is what keeps The 1940s Radio Hour from being merely a nostalgia-filled jukebox musical. While many numbers are indeed broadcast-worthy, such as “I Got It Bad (and That Ain’t Good)” from Geneva (Martikah Williams), the only black singer  in the cast, and Ann Collier’s “Have Yourself a Merry Little Christmas,” there are often two levels of interplay a few chairs back.

The broadcast players can also be rough practical jokers. The onstage musicians, including pianist Abel Searor (also music director of The 1940s Radio Hour), gang up on bearded, pipe-smoking Neal (Christopher James) as he attempts to warble “Blue Moon,” finally depantsing him in mid-phrase. WOV listeners are never the wiser.

The horseplay punctuates compiler Jones’ anti-romantic deflation of radio’s golden era. Not only were very few people making very much money, but quite of bit of the job was degrading to someone aspiring to stardom, like doing commercials. Some of these, such as the jingles for “Pepsi Cola” or “Chiquita Banana,” are just as familiar as numbers by Sammy Kaye or Burton Lane, if somewhat saccharine in comparison.

Worse, the radio players had to take speaking roles in commercial vignettes that turned on questions of personal hygiene, like body odor. Hard-luck player Neal supplies a convincing groan of constipation in a Sal Hepatica ad. Performers were muscled into being hucksters up until the early days of television.

Although the four musicians sit next to the singers, just as they would have in a 1942 broadcast, the script limits their interaction. The exception is trumpeter Biff (Nic MacLane), who dons an olive-drab U.S. Army uniform during the broadcast. He announces that he’s going to see action and that he’s leaving his horn behind. Other directors have taken this as a cue to switch the mood to a Casablanca-like world weariness, yet director Catchouny emphasizes a more upbeat tone, as the cast climaxes with “I’ll Be Seeing You.”