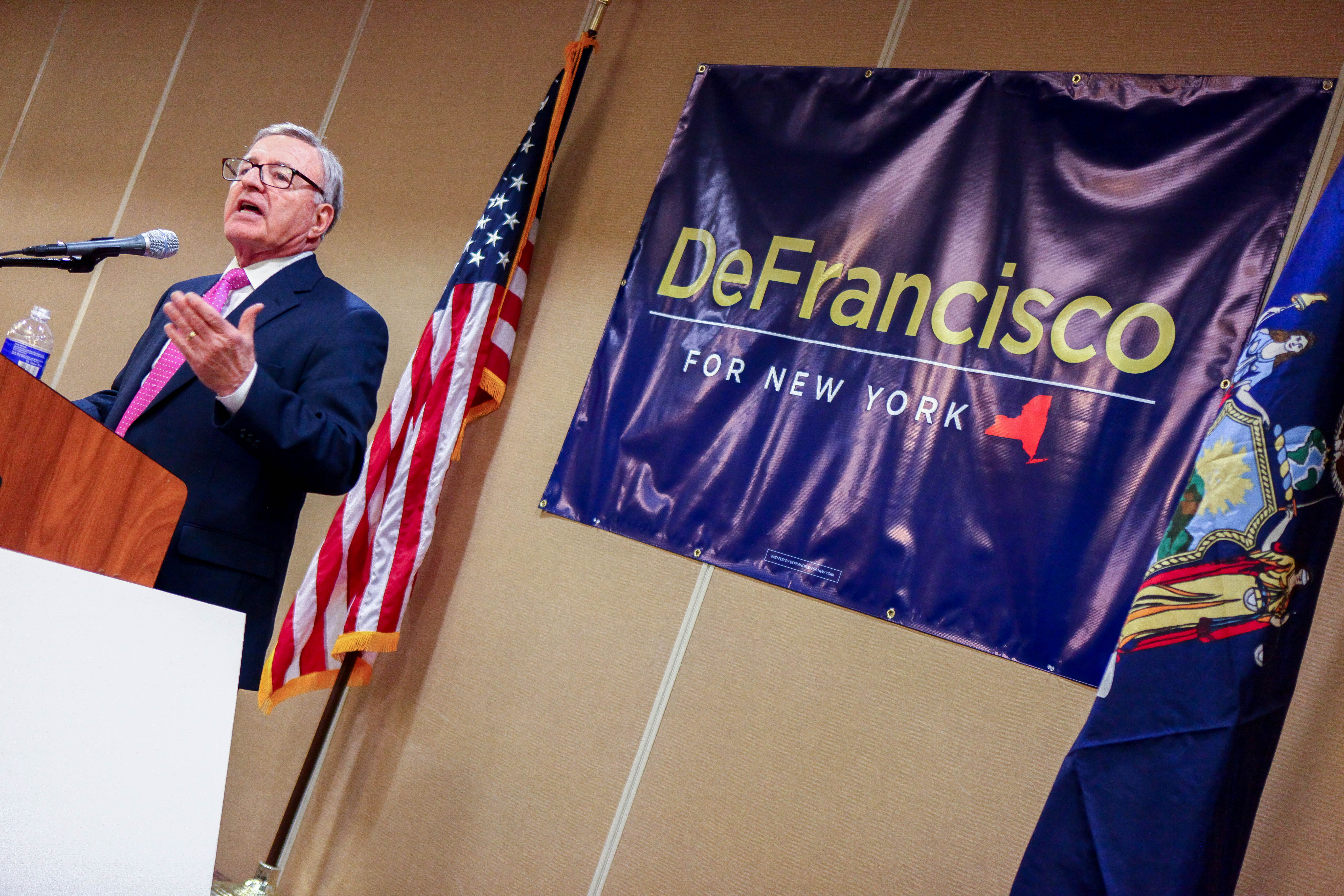 Whether at the ballot box or in pickup basketball games, it is obvious that state Sen. John DeFrancisco doesn’t like to lose. A calm intensity settles in, and an attitude emerges based in large part on hard work and force of habit. From the Syracuse City School District’s board of education to the city’s Common Council to his current 50th state Senate District seat, he has never lost a contest for elective office.

This time, however, he has announced his intention to seek the Republican endorsement in the coming race for governor. “I know how to play hardball,” he insists. But the odds are far from friendly.

Being a Republican candidate from upstate running against an incumbent downstate Democrat, the son of a previous governor, does not seem to be piling up many reality points. But DeFrancisco feels that his athletic roots just might even the score. 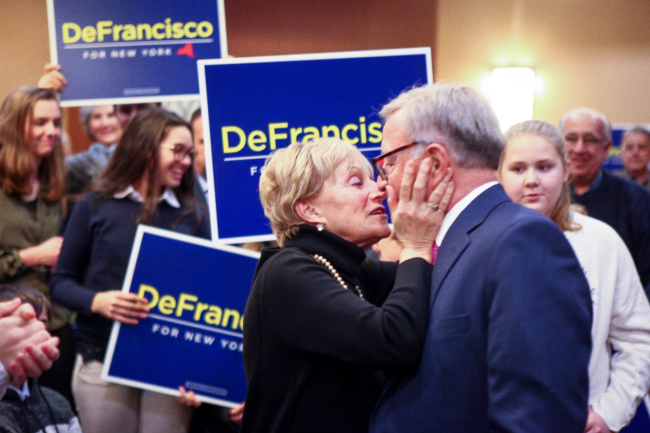 “From my formative years I played baseball probably since I was 6 years old through college and beyond,” he observes. “What it did for me was a lot of things. I was normally the captain, or as we got older the one who organized everything because nobody else wanted to take on that responsibility. It wasn’t only the excitement of playing the sport; being an athlete was a great reward, but dealing with people and being with a team means so much for anything you do in life.”

First, however, he must secure his party’s nomination. Two other contenders have thrown their hats in the ring, state Assembly Minority Leader Brian Kolb and former Erie County Executive Joel Giambra, and two others are considering.

DeFrancisco made his announcement Jan. 30 at Liverpool’s Holiday Inn, as he criticized Gov. Andrew Cuomo’s penchant for “gimmicks and budget one-shots” and Albany’s “pay-to-play culture,” and declared, “We must make New York affordable again.”

He also used a rare celestial phenomenon as a metaphor for his political chances. “There’s an old saying: once in a blue moon,” the senator said. “Everyone in politics knows that once in a blue moon we can bring about fundamental change. Well folks, tonight, there is actually a blue moon,” pointing out the Super Blue Blood Moon lunar eclipse that would occur within hours of his speech.

In anticipation of athletic competition there are physical and mental warm-up exercises to prepare you for the challenge. How do you prepare for playing the candidate in the voting game?

I’m still very active in physical exercise, whether it be working on an elliptical machine or with free weights, or simply running. I also still play tennis. I play golf periodically. You’ve got to be in shape to be at your best.

Being in elective office, and having practiced law, the mental part is obviously the toughest. You’ve got to be mentally tough. With politics, now that I’ve been in state government so long, the issues come easy to me, I’ve seen them for years. Now I feel as good as I can possibly feel mentally, because I’m constantly talking about these issues, because I’ve been running around the state saying the same things.

One element of athletic psychology is intimidating potential opponents out of the race. Two other folks have announced GOP gubernatorial intentions. You announced. Nobody dropped out.

That’s true, because it’s a little different than an athletic game. This is simply a numbers game. There are counties throughout the state that have committees. Those committees are going to decide, based on a weighted vote: Bigger counties have a stronger number of votes that go to the selection of the candidate. What you’re really doing is going to each area of the state, making phone calls, talking to people face to face, and you’re keeping a count and trying to figure out how you’re going to get more than 50 percent. There’s no psych there.

Your strategy for this game requires a balance of teamwork with individual effort. Do they get confused?

No. Not at all. In fact, much of today I was calling committee people in different areas of the state, and calling members of my team following state senators, asking for their assistance, talking to their chairpeople. The teamwork is required for the game I’m playing right now, both the mental and the physical elements. I announced on Tuesday night. The following morning I was on a 6:30 a.m. TV interview. I drove to Albany, had two radio interviews, and interviewed on shows in the area the rest of the day up until 7 o’clock at night. If you’re not in physically good shape you don’t make it through day 2. You’re always on your toes because every interview is different.

Does stardom have the same impact on this game as it does in athletics?

I don’t know about stardom, but what I believe is the competitive drive keeps you going. You want to be successful at the goals that you have put out for yourself, and that’s been true of every campaign I’ve run over the years. 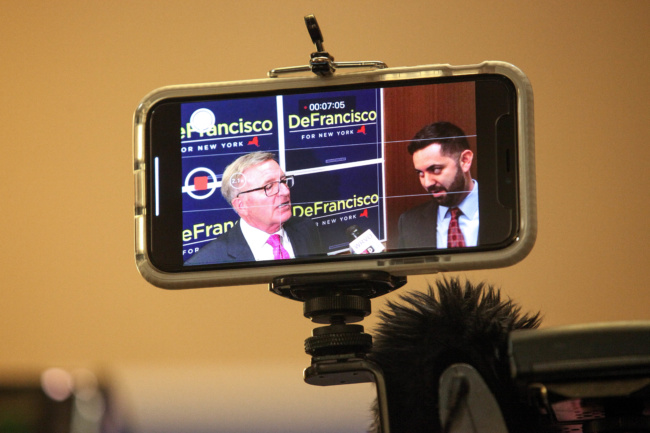 In athletics there are minor leagues for developing skills. Looking back now, what did the Syracuse school board prepare you for?

It prepared me for being an elected official and making nobody happy. The school board was probably one of the most difficult positions that I have ever been in, because it’s very deeply personal. With parents, their child is the most important thing to them, and they know what’s best for their children and unfortunately different parents have different knowledges of what they think is best. You have to listen to everyone and make a good decision. In many cases the positions were irreconcilable.

What did your experience on the Common Council give you for this race?

It’s just a continuation of the same thing. It was, quite frankly, a lot less stressful. There were issues, but when you’re dealing with things other than an individual’s child, the emotions aren’t as strong.

But what the council did was broaden the issues. The council had to pass a budget that included the budget of the school district, but it also had to deal with the state of New York, because most of the funding came, and still comes, from the state of New York. You get a broader feel for the inner-workings of government because you’re really in the middle of how the government units interact with each other.

What has your current position in the state Senate, particularly your leadership roles, given you in anticipation of being governor?

There are several committee chairmanships, including Judiciary and others before that, and then Finance Committee. Being chair of Finance, what that did for me, I truly learned, in an intimate way, all the aspects of the budget.

If you’re chair of the Judiciary you know things about the courts and whether it’s criminal or civil. You know a lot of things about the codes of the state of New York dealing with criminal or civil matters. But when you’re finance chair you learn about the financing of all the departments. We would have hearings that would last for 10 hours for 13 different days. I learned more in that period on the Finance Committee than I learned in any time in my history in government.

See the full photo gallery from the event here.