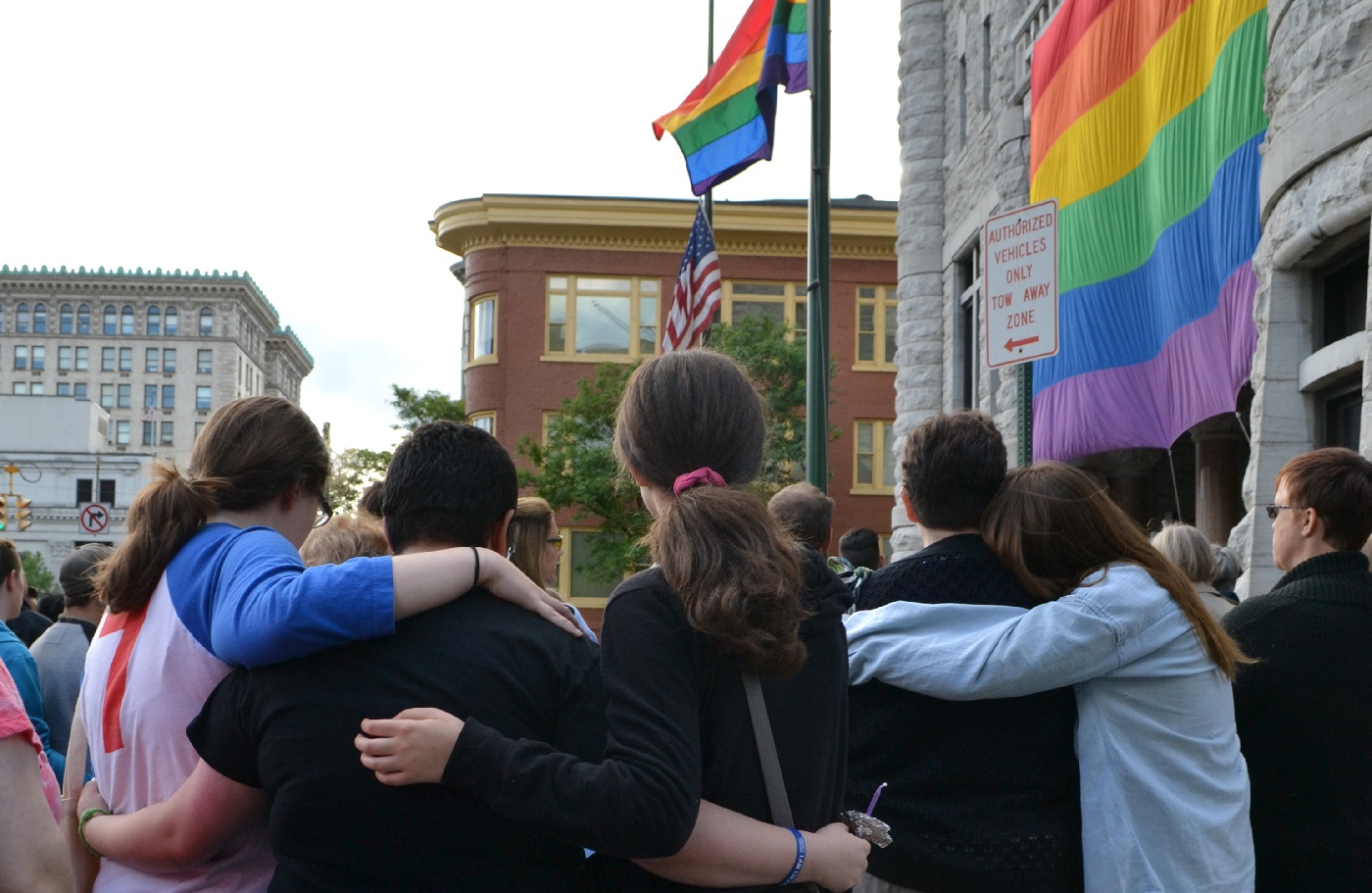 In response to the hate crime and violence in Orlando, a community rally formed outside Syracuse City Hall before the evening’s vigil.

On June 26, 2015, the day a Supreme Court ruling made same-sex marriage legal in all 50 states, the Rev. A.J. Striffler hosted a Syracuse rally celebrating the landmark decision. About 150 people attended that joyous gathering at Syracuse’s First Lutheran Church.

Nearly a year later, Striffler spoke to a crowd at least three times as large that gathered to mourn the deaths of 49 people killed Sunday, June 12, at a gay nightclub in Orlando, Fla.

“We have never backed down and we’ve never given in to bullying,” Striffler said at a June 13 rally outside Syracuse’s City Hall. The LGBTQIA community is “fierce, ferocious and fabulous in the universal call for justice,” he said. “We are beautiful, colorful people who walk together in the ugly mess society (has made).”

A mostly somber group listened to speeches, consoled one another and lit candles during the vigil. At least three city police cars were parked near the event, and Syracuse Police Chief Frank Fowler stood near the makeshift stage on City Hall’s steps. No protesters were visible, not even the anti-gay protester Jim Deferio, a regular at CNY Pride events.

Striffler belongs to the Evangelical Lutheran Church in America, which in 2009 voted to allow congregations to recognize and bless same-sex unions. He drew laughter and cheers in a speech that praised the diversity and resilience of the gay community. We “dance and twerk down the path to dismantling heterosexism and patriarchy,” he said. And the gay community “silences the biggest bullies with two claps and a snap.”

In a brief interview before the vigil, though, Striffler struggled to find a clever line to address religious extremism that leads to hatred of gays. “The rhetoric and language is meant to incite,” he said. “It’s meant to drive wedges between people and do damage.”

But vigil attendees said they wouldn’t let that happen. “I’m here to mourn and to urge against the easy scapegoating of Muslims that so often accompanies acts of violence,” said Kathleen Feyh, who held a small sign that read, “No Islamophobia.”

“As a queer woman it does not serve me to tighten surveillance, restrict immigration and marginalize Muslims,” she said. “To pit one oppressed group against another serves none of us. I’m not going to rise to the bait.”

Mohamed Khater, president of the Islamic Society of Central New York, looked drawn and tired as he read a brief statement condemning the massacre. As he and other Muslim leaders have done numerous times since the terrorist attacks of Sept. 11, 2001, Khater noted that the Muslim community is committed “to peace, safety, and security of our nation, as well as our solidarity with fellow Americans.”

Khater, who missed evening prayer to attend the vigil, said he was “heartened that the haters will not win” by pitting the Muslim community against the gay community.

The large crowd reflected diversity of age and ethnicity as well as sexual orientation and gender expression. In attendance were groups of young teens, longtime gay rights activists, couples with children in strollers and a few people with canes.

Amy Bartell held a sign in homage to Lin-Manuel Miranda’s sonnet after he accepted the award for best score for the Broadway musical Hamilton at Sunday’s Tony Awards: “Love is love is love.” Her 13-year-old nephew asked her to explain why someone attacked people enjoying a night at a gay club.

“I was stumped,” Bartell said. “When I heard this, I loved it. That’s what we have to hold on to: love.”

Harry Freeman-Jones, who married another man in 1973, said Sunday morning’s massacre was a reminder that legalizing gay marriage has not ended anti-gay discrimination and violence. “There’s been decades of bullying, intimidation, marginalizing, giving license to those people who want to murder our people,” he said.

“In our daily lives, we don’t feel safe because of who we love,” he said. “It’s taken a lot of fortitude to survive to this day. We need to amplify and renew our struggle. What always got us through is love and hope.”

That’s the strategy Striffler offers, too. “We’re not a people who respond to hate with hate,” he said. “We respond by coalescing and bonding and loving.”

The annual CNY Pride Parade begins Saturday, June 18, 11:30 a.m., with a route that travels from the Destiny USA parking lot down Solar Street to the Syracuse Inner Harbor, where the CNY Pride Festival will take place from noon to 5 p.m.