Warm-weather SU students try to cope with the season.

The coldest winter ever. Well, maybe not ever. For residents of Central New York, the January cold snap is close to the norm, and maybe not all that bad.

But plunging into two feet of snow can be a bit of a shock for those used to cool, but never cold, temperatures. Syracuse University students hailing from states such as Florida, Texas or California, and even from as far as India and Australia, couldn’t have done much to prepare for the extreme weather conditions that come with living in Upstate New York. The shoveling of cars, the embarrassing falls on the ice and the layers upon layers of clothing are all new experiences for these warm bodies. O, spring where art thou?

Many SU students come to town with thoughts of freezing temperatures, but negative temperatures like those of the Polar Vortex … and after … are something these students cannot even fathom. They’re used to sunshine and beaches, not snow and ice. Although the weather outside is frightful, students still manage to make it through the winter season.

I am from Fairfield, Texas, a small town that has never seen more than a thin layer of ice, with the coldest temperatures being in the 30s. I arrived to Syracuse in late June, and the weather was quite nice (most days). I expected the temperature to be significantly lower as the months progressed, however nothing could have prepared me for what arrived late December. The temperatures were reading into the negatives.

My most embarrassing moment occurred when I had to shovel out my car for the first time. I had no idea what I was doing, and my small frame clearly lacks the manpower needed to get the job done.  My green Volkswagen Beetle was buried,  with very small traces peeking through the snow. Not knowing where to begin and running late, I figured I could move fast and get the job done quicker. Not the best idea. I slipped and ended up on the ground covered in snow. A man passing by, and perhaps relishing in the idea of this out-of-towner waddling in the snow, came to my rescue. He dug out my car for me with a list of instructions to follow for safety.

Timi Komonibo, a native of Houston and graduate student at Syracuse University, is the queen of layering. She has on three shirts, jeans with leggings underneath, a scarf, a knit headband, gloves, fluffy socks (two pair), boots, plus a coat to top it off. She says that she prepared for the Polar Vortex the entire winter break. However, she did not prepare mentally for the ambush of snow and wind that would soon hit her.

“I had no idea the cold weather would make a mockery of my attempts to stay warm and dry. No one told me my forehead would turn into an ice block. Talk about brain freeze,” said Komonibo.

Komonibo experienced a small amount of cold during her stay in London as a child, but nothing like the ruthless weather here. Texas winters are hardly that of Syracuse and are very short.

“Last week, in my hometown, they cancelled school and work because it was 30 degrees and the roads were icy. I laughed,” she said.

Suvesha Vengatesh landed in Syracuse from Coimbatore, India. There, winter is like summertime in Syracuse, she says. She has a love-hate relationship with the snow, enjoying all her snow-firsts, such as snowball fights, snow angels and building snowmen. However, at the same time, she is struggling to adjust to the cold.

“The novelty wears off. I don’t really mind the snow, but it is the wind that I cannot stand. It’s brutal,” said Vengatesh.

To keep warm, Vengatesh says that she stays indoors as much as possible and layers her clothing to beat the on-foot commute to campus. However, her attempts to trump the cold are not always successful. Her tears have frozen on her eyelashes while walking against the merciless wind.

“I would say that I am not coping as well as I expected. Summer, where are you?” she said. 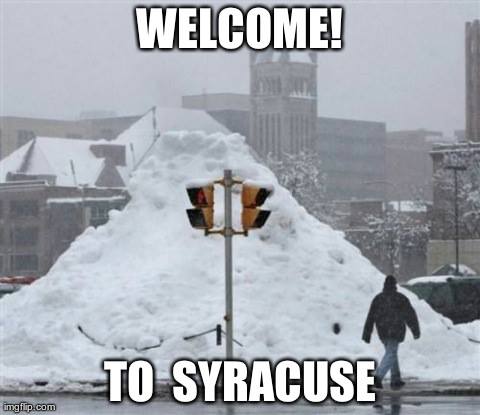 Rather stay inside?  CLICK HERE  to learn about a student housing development coming to downtown Syracuse.