After the Syracuse University men’s basketball team’s win over Cornell Dec. 31, coach Jim Boeheim was asked if it was important for the Orange to get off to a good start in Atlantic Coast Conference play.

“As opposed to getting off to a bad start? Yeah, it’s important,” Boeheim said, grinning. “It’s like you have money or you don’t have money; it’s better to have some.”

As the Orange enters its second year in the ACC, this much has become clear: SU has some money, but it’s living paycheck to paycheck. 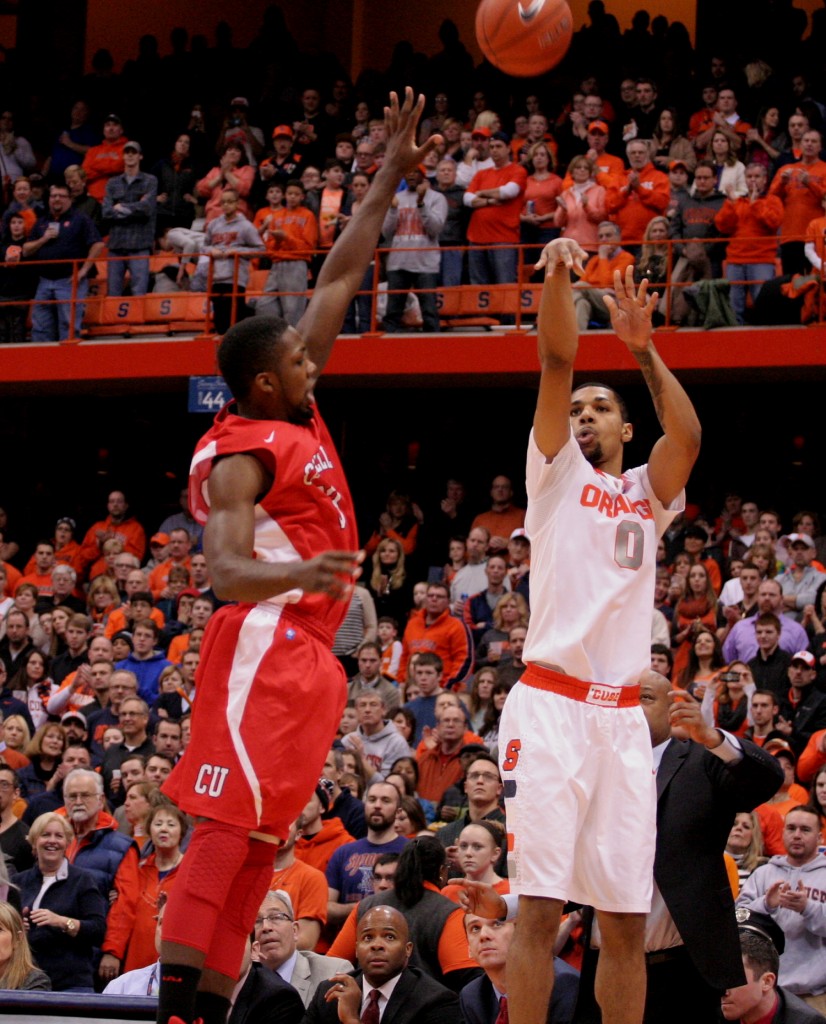 After routing Cornell to finish its non-conference schedule at 9-4, the Orange opened ACC play this past Saturday at Virginia Tech. The Hokies were picked to finish last in the 15-team ACC in the pre-season media poll, and they played Saturday without their leading rebounder and one of their top scorers, suspended forward Joey van Zegeren.

The Orange frittered away a 19-point halftime lead but still led by 11 with two minutes, 22 seconds left in the game. SU’s poor perimeter defense and even worse foul shooting enabled the Hokies to rally again before the Orange escaped with a 68-66 win.

“I think we’ve improved in some areas, but we’ve still got a long ways to go,” Boeheim said following the game.

The good news, of course, is that the Orange won a close game on the road. Earlier this season, SU lost at Michigan and at Villanova in overtime because they made too many mistakes at the end of the games.

“A win is a win,” said junior guard Trevor Cooney, who scored a team-high 18 points against the Hokies. “The last time we were in a close game (on the road), we lost. So it feels good to be in a close game and win.”

The bad news is it was close enough for SU to lose. We’re repeatedly told how difficult it is to win on the road in the ACC, and that’s true. But this was Virginia Tech, perhaps the worst team in the league, playing without van Zegeren for the entire game and three players who fouled out near the end of the game.

“Really, as much as I’m upset with our defense, if our offense had been any good at all they would have gotten back into the game, but it would have been a 10-point game and that’s pretty good on the road,” Boeheim said.

After another road game Wednesday night at Georgia Tech (9-4, 0-1 in the ACC), the Orange will play its first ACC home game at 8 p.m. Sunday at the Carrier Dome against Florida State (8-6, 0-1 before Tuesday’s game against Virginia Tech).

The Orange is fortunate that the first seven games of its ACC schedule includes most of the league’s worst teams. Not that pre-season polls are always the most accurate, but for what it’s worth six of SU’s first seven ACC games are against the teams picked to finish 10th through 15th (Miami, Clemson, Wake Forest, Georgia Tech, Boston College and Virginia Tech). Florida State was picked to finish 8th.

Of its final 11 ACC games, SU has six against current top-25 teams (two against Duke, and one each against North Carolina, Louisville, Notre Dame and Virginia), plus difficult road games at Pitt and North Carolina State.

“It’s going to be a really tough schedule,” said SU freshman forward Chris McCullough. “You always want to play in big games like that. Now, here it comes. We’ve got to come out ready to play.”

If the goal is to make the NCAA Tournament and it’s going to take at least 20 wins to get there, the Orange need to defeat the weaker ACC teams in the first half, and improve enough to get a few wins in the second half that will get the tournament selection committee’s attention. Right now, SU’s biggest win is against Iowa and that’s not going to cut it.

Fast Fact: The Orange ended the year with four non-conference losses for just the second time in coach Jim Boeheim’s 39-year career. The other time was in 1996-97, when SU finished 19-13 and played in the NIT Tournament one year after reaching the NCAA championship game.