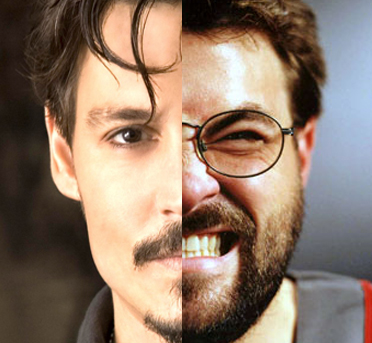 And they’ll do it in the interestingly named Yoga Hosers

First off, they picked a title that makes you look twice.

Johnny Depp and Kevin Smith will be working together on a film by the title of Yoga Hosers.

The Hollywood Reporter makes good on its name by reporting that the flick will also star the famous pair’s daughters.

Those guys pick cool names for their offspring or what?

In Yoga Hosers, written by Smith, both of the girls’ characters will be named Colleen. They’ll be 15-year-old yoga lovers who work at a Manitoba convenience store — Hosers, by God! — by the name of Eh-2-Zed. Depp plays a legendary man hunter who helps the girls fight an evil doer who rises from the earth’s crust.

Over at Screen Rant, director Smith is quoted as admitted as such, calling the two teens “the most feared and formidable creatures man has ever encountered.”

Studio honchos do a good deed

Yes, the remake of Teenage Mutant Ninja Turtles did win over a whole new generation and convince oldies to join the newbies, making money pretty much hand over fist, some $120 million in the U.S. and $200 million worldwide in two weeks, according to Cinema Blend.

That’s where Harpster604 posted about his cousin, who suffers from Duchenne muscular dystrophy, being confined to a hospital bed, where he’d have to miss out on the theater experience with fellow Teenage Mutant Ninja Turtle fans.

O’Connell writes of how a screener showed up a the hospital with a copy of the movie and a handwritten letter.

Good job. Heartwarming and genuine, it seems from the post over yonder.

They’re not real cops, but they’re really dumb
The Espresso Shot (#016)
To Top