Most people will recognize the name Dan Baird from the Georgia Satellites, the chart-topping 1980s-era rock band he fronted as lead singer and rhythm guitarist. But when Baird visits the Dinosaur Bar-B-Que on Monday, Aug. 25, he’ll be rocking alongside Homemade Sin, a lineup that also features former Satellite drummer Mauro Magellan, bassist Micke Nilsson and the ever-animated guitarist Warner Hodges from Jason and the Scorchers.

Dan Baird and Homemade Sin offers a wild combination of rock, country and punk, featuring a raucous set list of ripping guitars and irreverent lyrics. Hodges, who has been with the group for the past eight years, recalls with laughter about his entrance into the fold.

“I was doing a solo record and Dan and I reconnected,” he says. “I had known him for 30 years and asked him to play some guitar. He liked the idea of playing lead and not just rhythm. So while we were doing that record, he walked in one day, slapped down some CDs and said, ‘My guitar player just quit. I need you to help me out.’ I said, ‘Sure, of course.’ It was supposed to be 12 shows, but I’ve been playing with him ever since.”

The band covers songs from the Georgia Satellites and Baird’s solo discs, as well as tracks from the two Homemade Sin albums released in 2008 and 2013. “We never use a set list,” Hodges emphasizes. “Every night’s different than last night.”

Hodges grew up with musical parents; they moved to Nashville in his teens so his mother could pursue her singing career. Although it never panned out for Hodges’ mom, Nashville was an ideal location for the budding musician. Originally a drummer, he started seeing and playing out with world-class musicians. 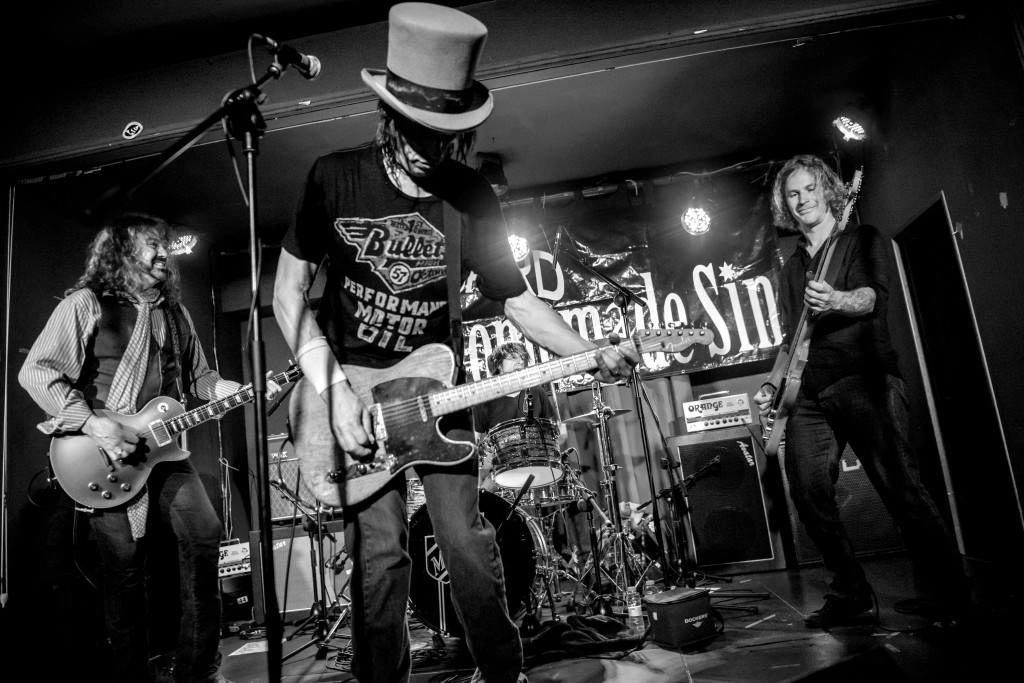 Hodges also cites hard rockers AC/DC as an influence: He’s seen them perform more than 100 concerts. “I saw AC/DC one time and had to learn how to play guitar,” he remembers. “I thought, ‘I gotta learn how to do that.’ But I always loved drums. It’s what I pay most attention to on a record.”

Working in the Nashville scene, Hodges got to know Jason Ringenberg, a singer and songwriter who was opening for R.E.M. and Carl Perkins during the early 1980s. Hodges, who attended the shows with bassist Jeff Johnson, immediately thought, “I gotta play with this guy.” Jason and the Scorchers was born, and Hodges continues to play with Ringenberg 33 years later.

“We live 30 miles from each other,” Hodges says, “but sometimes we’ll go a year and a half without seeing each other. We jokingly say Jason and the Scorchers works for us, we don’t work for it anymore.”

In addition to those two bands, Hodges performs solo stints as well as gigs with The Bluefields, also featuring Baird, Brad Pemberton and Joe Blanton. “I’ve got lots of different irons in the fire,” he says.

Hodges is also excited to revisit his old stomping grounds. “Scott (Sterling, music director at several Dinosaur Bar-B-Ques) and I go way back,” he says. “He promoted some of the first Jason and the Scorchers shows at the Lost Horizon. We played there for years. And Penny Jo Pullus (who is the opening act for the show), I’ve known since the mid-1980s.”

“Work on your trade every day. Get better. Stay away from drug and alcohol habits. They’re really easy to have and really bad to have in this business. I still practice two hours on show days and fours hours on non-show days and I’m 55 years old. Do it every day. I’ve learned by watching Dan. He’s 60. If he makes a mistake he’ll go back to the hotel and work on it until it’s no longer a mistake. You know what they say: Amateurs do it until they get it right. Professionals do it until they can’t get it wrong. I don’t want to let the team down because of my crappy playing. All these years later, I’m still pushing my envelope. I want to be the best I can be.”