The current exhibit at the Community Folk Art Center features work by three young artists, all of whom create ceramics and all of whom are of Korean heritage. After that, Three in Harmony completely spreads out, incorporating drastically different artworks.

Jee Eun Lee’s “Temporal Reflection,” for example, portrays a mountain, with peaks and ridges in fine detail. The large sculpture isn’t intended to merely evoke a landscape. It suggests that mountain is majestic, beyond time, beyond human events and thoughts. In addition, the mountain serves as a tie-in to the realm of nature on our planet. 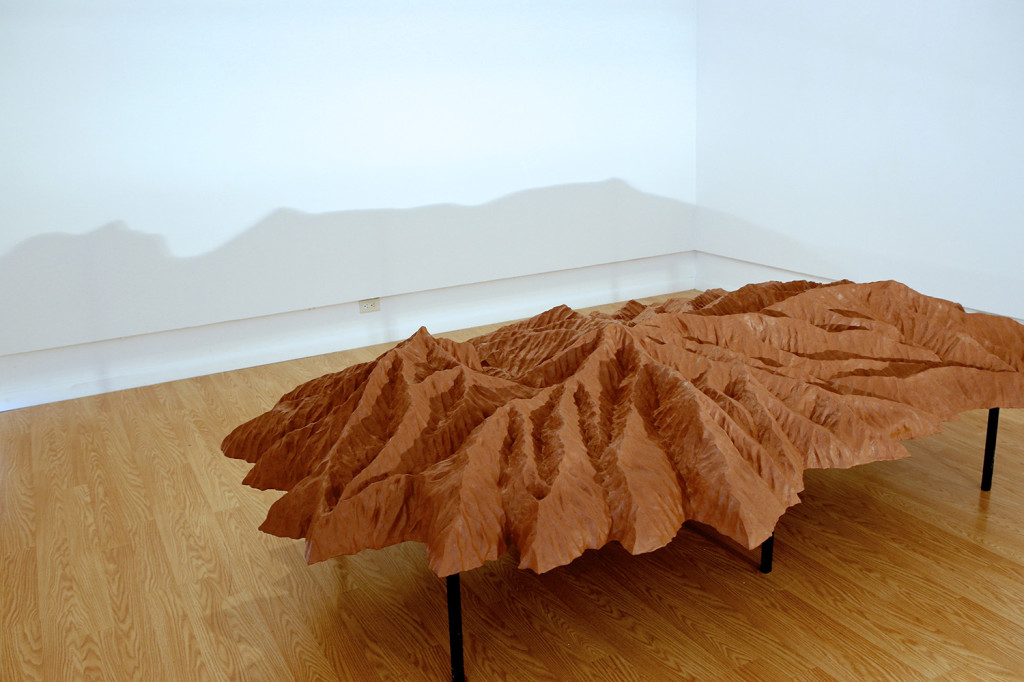 Eunjung Shin Vargas, meanwhile, has created ceramic figures and installations reflecting on her experience as the mother of a 2-year-old child. Her daughter lives in the United States and is being raised by a mother of Korean heritage and a father whose ancestors come from Mexico.

The sculptor, in various artworks, explores her child’s potential exposure to three cultures. There are nine figures on a pedestal, including a rockabilly musician and an Asian elder. Other figures depict a kimomo doll, an El Tigre doll popular in Mexico, and a baby who wears a red, white and blue hat and sits on a bowl decorated with red and green stripes. 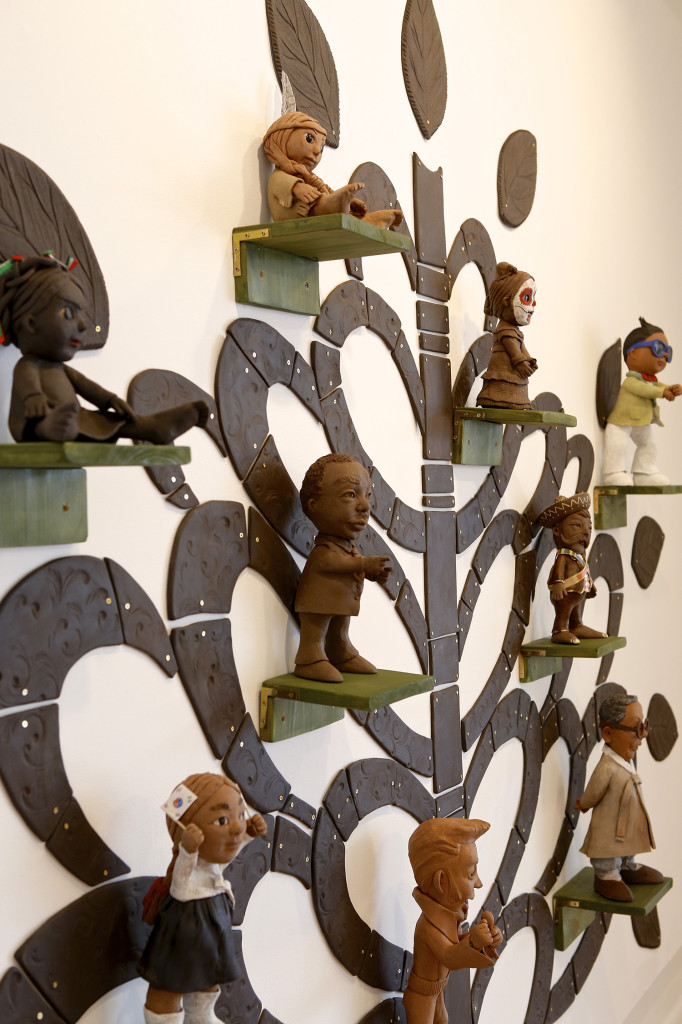 Vargas doesn’t use her artworks to deliver facile conclusions. In fact, the pieces mostly raise questions and invite viewers to consider cultural implications.

Veronica Juyoun Byun has created “Memoirs of Lady,” with its display of 30 pairs of porcein shoes, and other works utilizing repetition. There’s a series of small ceramic pieces, each of which suggests a flower that’s opened. This isn’t repetition for the sake of repetition. Rather, it’s a technique inviting viewers to slow down, to consider the artworks at length. 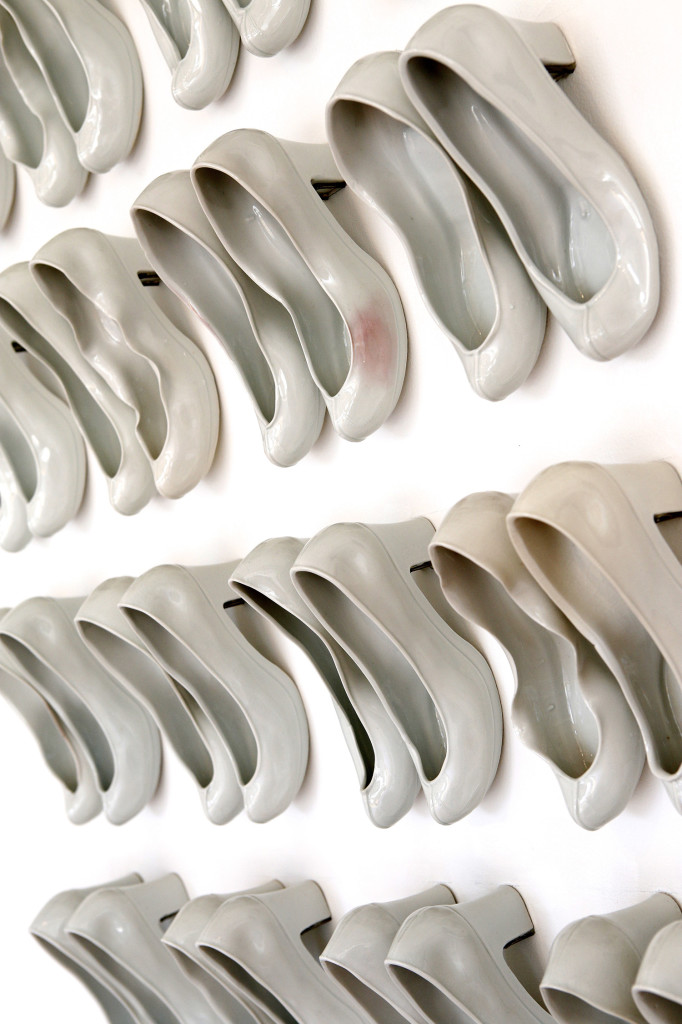 Three in Harmony gathers work by three artists, all of whom who have recently taken part in graduate studies in ceramics at Syracuse University. The exhibition both documents their current artistic interests and hints at further developments down the road.

Saying that Gail Hoffman works small is an understatement. In her bronze sculptures, she places tiny objects and figures into a space no bigger than a dollhouse. This isn’t a short-term project: Hoffman has made roughly 50 sculptures integrating small environments and diverse narratives. 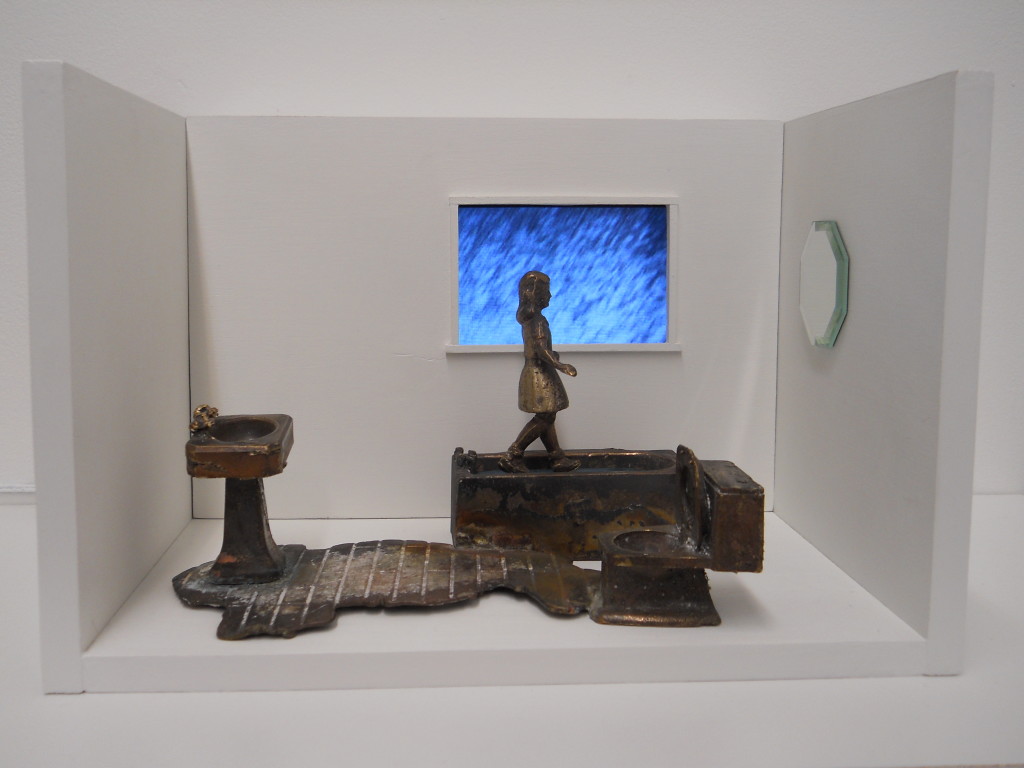 Gail Hoffman’s “In the Bathroom” at Schweinfurth.

In the Made in New York show, through May 25 at Auburn’s Schweinfurth Art Center, 205 Genesee St., her piece “In the Bathroom” received a first-place award. The sculpture combines a bathroom, set in a small space, and a tiny portal through which one can view brief video segments.

The video footage doesn’t directly reference a bathroom scene. Instead it helps communicate a mood. Hoffman seems to view the bathroom as a place of temporary refuge, a location where it’s possible to escape from the world for just a few minutes.
That’s one perspective on the sculpture. Hoffman’s pieces are subject to interpretation, as she combines a stripped-down space with a sophisticated approach to narrative.

In another sculpture, a family watches television in a living room while a military helicopter hovers above the house. Here the artist is touching on news reports about the Vietnam War or other conflicts. She’s also posing fundamental questions: What do we let into our lives? What do we exclude?

Hoffman works with a flexibility that allows her to explore various ideas. One sculpture portrays what was once a magnificent structure and courtyard in ancient times. In the middle of the space, two tiny figures confront each other, evoking the movie High Noon. There’s discussion of past and present, of what was long ago and what remains today.

The artist has shown her work at local venues including the Everson Museum and Le Moyne College’s Wilson Art Gallery and in galleries beyond Central New York. In 2008, her sculpture, “Entropy,” won first prize in the Texas National.

“In the Bathroom,” by Gail Hoffman of Syracuse, 2012. Wood, cast bronze, glass and video.

What’s Happening in Art
Back to the Future
To Top