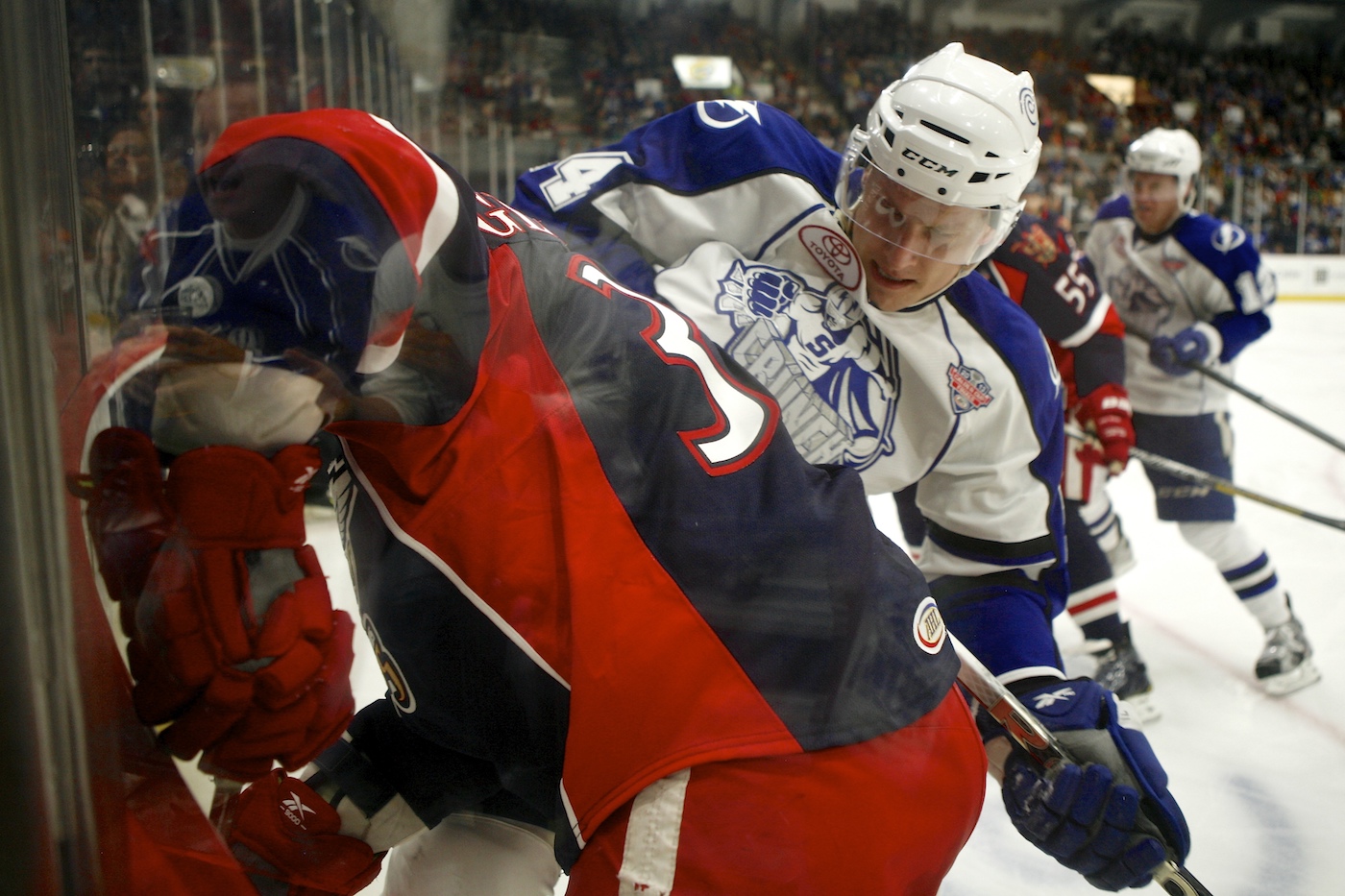 The Syracuse Crunch hockey team returns home Wednesday, May 24, with an opportunity to get a stranglehold on its Eastern Conference finals series with the Providence Bruins.

The Crunch earned a split in the first two games in Providence, winning the first game 6-3 May 19 and losing the second game 2-1 in overtime May 21. Syracuse will host the next three games Wednesday, May 24, Friday, May 26, and Saturday, May 27, at 7 p.m. at the Onondaga County War Memorial Arena. Crunch goaltender Mike McKenna is 6-0 at home in the postseason.

The Crunch and P-Bruins will play Games 6 and 7, if necessary, on Tuesday, May 30, and Wednesday, May 31, in Providence. The winner will advance to the Calder Cup finals against the winner of the Western Conference finals series between the San Jose Barracuda and the Grand Rapids Griffins.

The Crunch, which re-entered the American Hockey League in 1994, have never won the Calder Cup, the AHL’s version of the Stanley Cup. The Crunch reached the Calder Cup finals in 2013 but lost in six games to Grand Rapids.

Syracuse advanced to the Eastern Conference finals by defeating the Toronto Marlies in seven games in the North Division finals series. In the deciding game, the Crunch scored five unanswered goals for a 6-3 win that marked Syracuse’s first seventh-game playoff win since 1996.

The Crunch offense continued to sizzle in the first game against Providence as six different Syracuse players scored in the 6-3 rout. But after taking a 1-0 lead just 1:26 into the second game, the Crunch couldn’t find the back of the net again against P-Bruins goaltender Zane McIntyre and lost at the 8:28 mark of overtime on Jordan Szwarz’s second goal of the game.

Tickets for this week’s games are available at the Crunch office, located inside the War Memorial Arena, 800 S. State St.; by calling (315) 473-4444; or through Ticketmaster. For the latest Crunch news, visit syracusecrunch.com or follow the team on Facebook (facebook.com/syracusecrunch), Twitter (@SyracuseCrunch) and Instagram (@syracusecrunch) using #SyrCrunch and #FIN15H.

There was a time when it seemed like the Syracuse University men’s lacrosse team earned an automatic bid to the NCAA Tournament’s Final Four every year. But as the popularity of lacrosse is on the rise and the best players are spreading around the country, those days are long gone for the Orange.

Looking to reach the Final Four for the first time since 2013, the No. 2 Orange fell behind No. 11 Towson 6-0 and never recovered as the Tigers upended SU 10-7 May 21 in an NCAA Quarterfinal Round game in Newark, Del.

Possessing the nation’s second-best man-up unit, the Orange failed to convert on all four of its extra-man opportunities, while seven Syracuse penalties led to three goals for Towson.

“We are obviously disappointed to not be playing next weekend, especially for our seniors and our guys who played so hard today,” Orange coach John Desko said after the game. “But my hat’s off to Towson. I thought they did a great job today, especially in that first quarter to put up six goals. We found ourselves playing catch-up the rest of the way.”

The loss ended a season full of nail-biters for the Orange. SU finished 13-3 with 11 of its 16 games decided by one goal, including Syracuse’s come-from-behind 11-10 win over Yale in the first round of the NCAA Tournament.

Like the men’s team, the Syracuse women’s lacrosse team’s season also ended in the second round of the NCAA Tournament as the sixth-seeded Orange was upset by unseeded Boston College 21-10 May 14. “We’re a young team and we didn’t step up to the playoff challenge against a team that is playing very well right now,” said Syracuse head coach Gary Gait, whose team finished 15-7.