Why are our local officials unwilling or unable to step up to prepare us?

Bob Conley, the assistant fire chief of Galena, Ill., told his troops to do the sensible thing when a tanker train carrying explosive crude oil went off the tracks and caught fire near his town last week. He told them to get the hell out of the way and wait for the fireball to burn itself out.

Conley was following the best practice available to him. Evacuation is the only response that emergency crews around the country have found to the increasingly common derailment and explosion of trains carrying oil from the Bakken shale in North Dakota.

Add Boomer Bottom, W.Va., and Galena, Ill., to Lynchburg, Va., and Lac-Mégantic, Quebec, as areas that have witnessed horrific explosions and fires. In our eagerness to get oil from well to refinery, we are allowing combustible oil to be shipped too close to our homes in cars that federal officials acknowledge to be unsafe.

Last month the residents of Boomer Bottom were roused from their homes and evacuated when a train came off the tracks. Doors blew off the hinges, children were scared half to death, but thankfully, no one died. Boomer Bottom is home to 615 men, women and children. These trains go through crowded metropolitan areas every day. It is only fortune that has spared us or any other population center from a disaster.

Lac-Mégantic was home to 5,932 people when a train carrying Bakken oil dispatched 47 of those souls to the next life in July 2013. How many more people live near the tracks in our community? Lots. 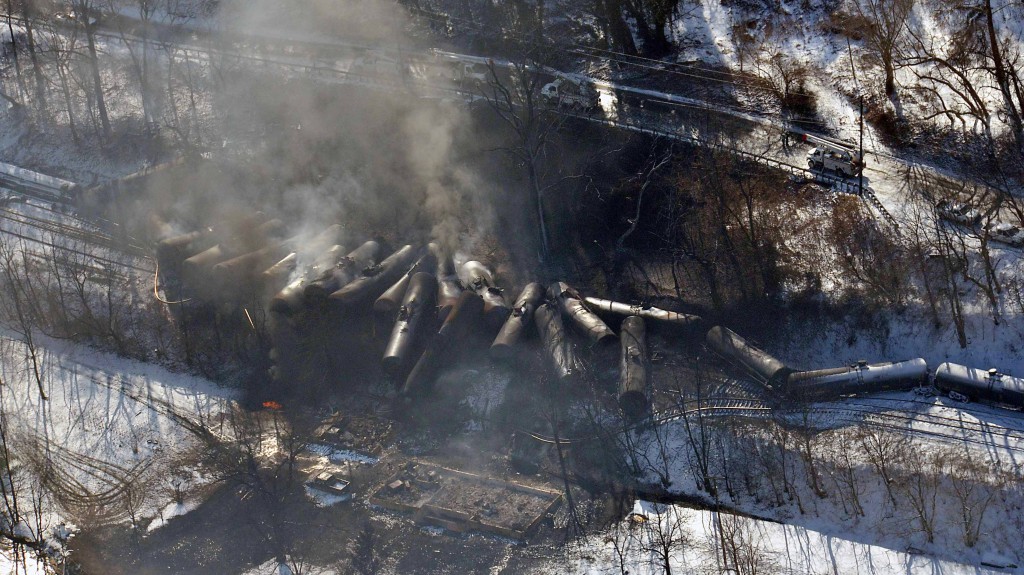 In a handout photo, a train carrying crude oil lies burnt after derailing in Mount Carbon, W.Va., Feb. 17, 2015. An oil train derailment near Galena, Ill. on March 5 – the third such accident in a month – has prompted calls for more aggressive implementation of new safety regulations for the shipment of oil by rail. (Steven Wayne Rotsch/Office of the Governor of West Virginia via The New York Times)

The most recent derailments and fires involved the retrofitted “1232” rail cars that the federal government and the railroads have started using in the past few months. That changeover, from the DOT 111 cars that carried the crude that incinerated Lac-Mégantic, was largely cosmetic, according to federal officials we interviewed at the time. It is a feel-good measure with no public safety value.

In the 11 months since we began reporting on the daily passage of dangerous explosive oil through Onondaga County, our leaders have been asleep at the switch when it comes to protecting the public.

Consider this: Bakken Crude had been coming through the county for at least a year when we first contacted county officials to ask about it. They were unaware of the trains’ existence. CSX, the rail company handling the cargo, is under no obligation to tell us when they send such hazards through our backyard.

Here’s what’s happened since: CSX led local first responders in training exercises last summer, the Minoa Fire Department was given a foam spreader, and plans were announced for a full-scale simulation “early this year.”

It is no longer early this year, and, as far as anyone can tell, that drill has not taken place. One of the reasons for the delay might be the resignation of Kevin Wisely, the county official responsible for emergency management. In January Gov. Andrew Cuomo appointed him to a job in New York state’s Homeland Security Division.

During his tenure at the county, Wisely was dismissive of concerns about the oil trains. His responses were not comforting. Mostly he would note how many other nasty toxic and combustible items came through town on the rails and assure us that his troops were prepared.

Wisely was whistling in the dark. But at least we could hear him whistle. Now he is in Albany and his office sits empty. When I called Onondaga County Emergency Management last week, I was told that they did not have an interim boss and did not know when a new commissioner would be named. I called the county executive’s office to ask when a new commissioner would be appointed. Chief of Staff to the County Executive Martin Skahen replied promptly with careful nonchalance, saying that the search for a replacement was “ongoing” and there is no timeline.

Meanwhile, hundreds of schoolchildren sit in the path of an oil train disaster every day. Thousands of our neighbors and friends live so close to the tracks that they would be toasted by a derailment and fire.

Why are our local officials unwilling or unable to step up to prepare us? When will the evacuation drills begin? And why don’t we even have someone in charge of emergency response?

Get the app ERG2012, which our first responders carry. The best advice it offers, should a train carrying explosive crude blow up in your town, is to run away.

News and Blues
Model Citizen Rails Against Train
To Top