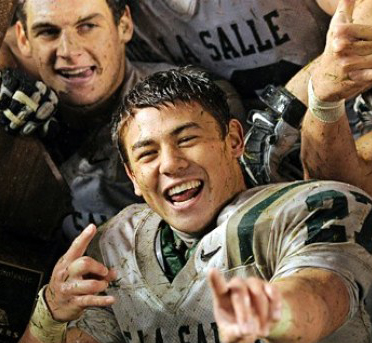 I won’t say that the De La Salle High School football squad will be my favorite team this season. But for 1 hour, 42 minutes of When the Game Stands Tall Saturday afternoon in the theater at Destiny USA, I sure was pulling for the boys coached by Bob Ladouceur.

Sony Pictures timed the release for this film directed by Thomas Carter and written by Scott Marshall Smith wisely, what with real life football cranking up for real this very weekend, including our very own Syracuse Orange hosting the Villanova Wildcats on Friday night.

But throughout the well-acted story, I also got the feeling if they got their way, perhaps it would only be screened on Sundays. For as much as this is a movie that would not have happened if not for a 151-game victory streak earned by the teams molded by Ladouceur in Northern California in the late 1990s and early 2000s, the path chosen here is to focus on how he taught that hard work, teamwork, inner strength, morals, and yes, faith were the elements that would bring them success in life. Spartans forever, they’d say, using the nickname of the sports teams for their Catholic high school.

In the opening credits, so much is said by the proclamation that the film is inspired by a true story.

It starts at the finish of a season, before the Spartans win their 151st game of this record streak, and the seniors on the team read the mission cards they wrote to start the campaign. Yes, it is inspiring stuff, and they win, fueling the craze for the streak that grips the school. But the coaches, played very wisely by Jim Caviezel as head man Ladouceur and Michael Chiklis as his trusted top assistant Terry Eidson, have some worries that the juniors might not be ready to take on their leaders’ role next season.

One of those who need to step up is Ladouceur’s son, a wide receiver who knows he’s prone to dropping passes, and another is running back Chris Ryan, a stud on the field who’s set to break the state record for touchdowns scored if he continues the pace of his sophomore and junior seasons. Matthew Daddario and Alexander Ludwig are sensitive and tough in the roles. In fact, the actors who portray all of the players are outstanding. The best of them are Stephan James and Ser’Darius Blain, who play best friends T.K. Kelly and Cam Kelly who’ve made good on a pact to play together in college be receiving scholarship offers from Oregon until tragedy befalls Kelly and tests the entire De Lasalle family. 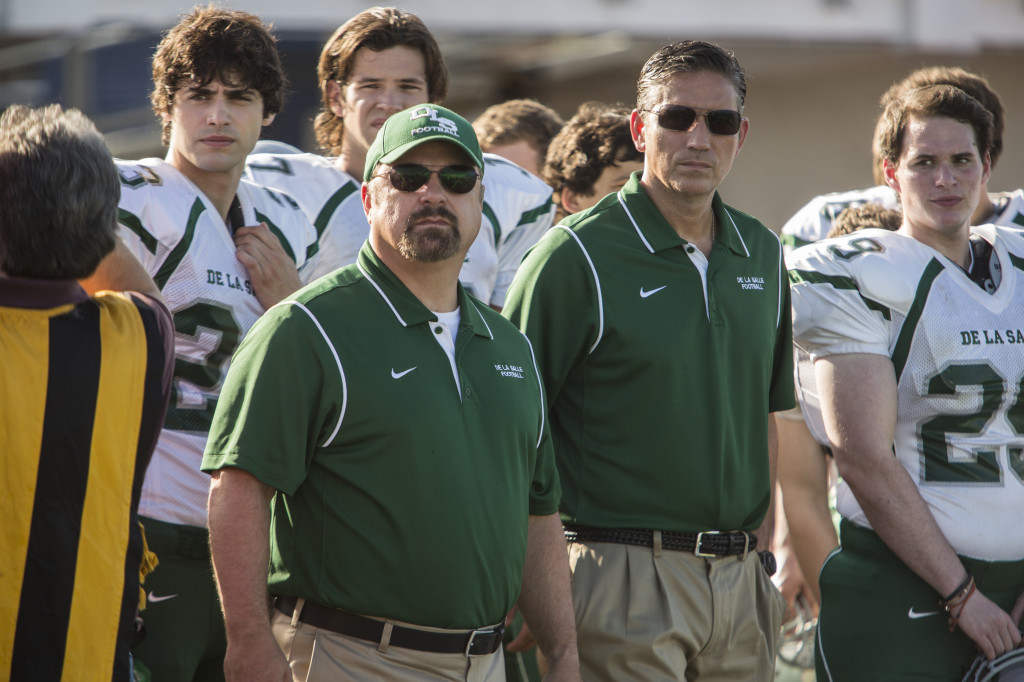 Laura Dern is fine, too, as Ladouceur’s concerned wife, and Clancy Brown is outstandingly grating as Ryan’s overbearing father.

The offseason after win 151 couldn’t be worse. Ladouceur suffers a heart episode and is told he can’t coach spring ball, that tragedy rips the program, and the young leadership has to contend with some inner team strife. Right before the season opener, the coach gets a clean bill of health, and decides to return to the sidelines.

But the Spartans lose. The streak is over. The air comes out of the balloon. Nobody knows what to do. Ladouceur uses defeat as a teaching moment, telling them life is tough and to get over it. And the team loses its second game of the season, too.

And that’s when he gets the players on a bus at 8 a.m. the next morning and takes them somewhere that really opens their eyes and makes them believe what he’s been saying since they lost.

The rest of the season, well, the football games are quite dramatic.

I hope for such excitement — hell, success — from the Orange, and my Terps and Jets.