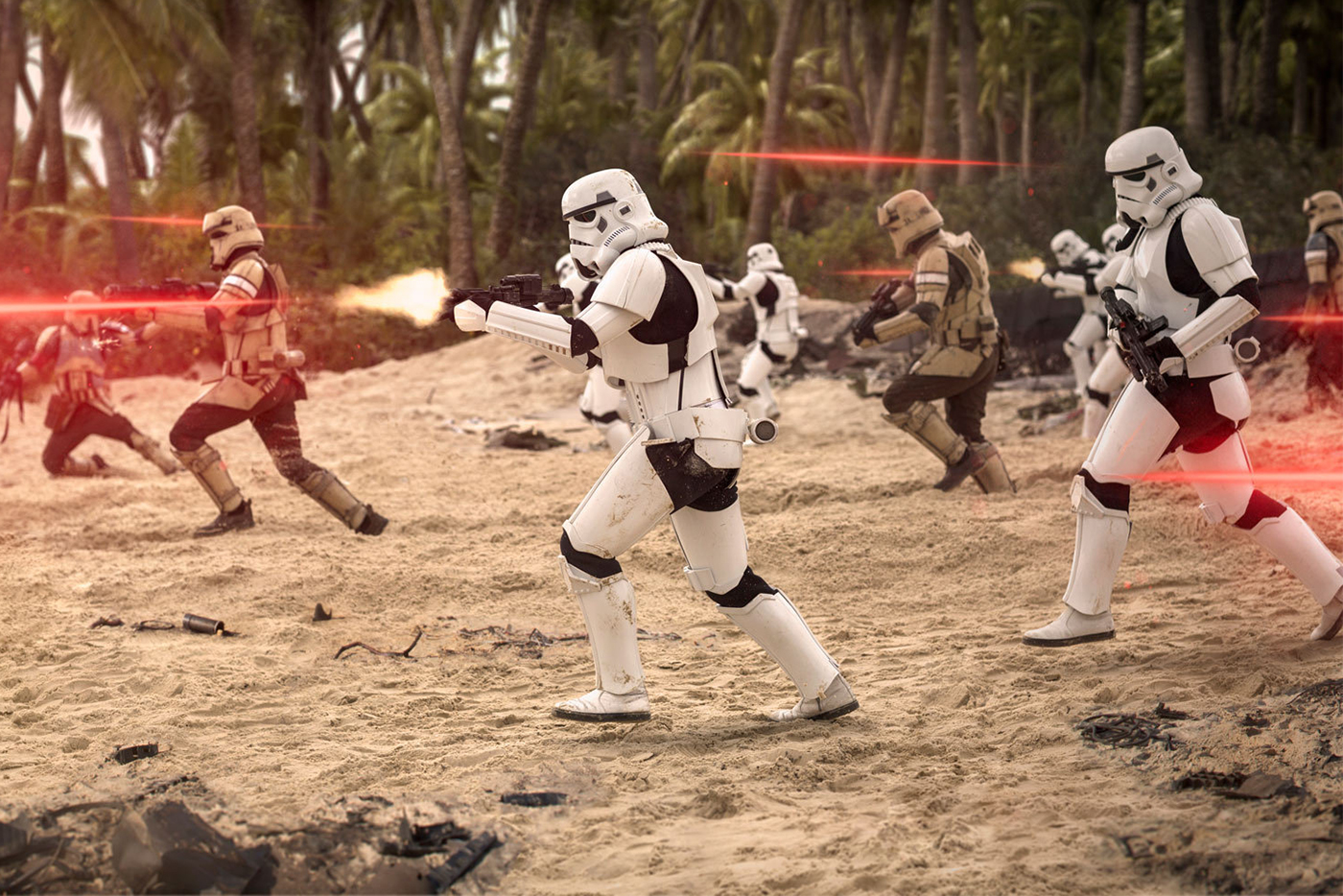 The ‘Star Wars’ saga has always been known as a family-friendly spectacle, but with ‘Rogue One’ hitting theaters this weekend, is that still the case?

Star Wars has a rich history of violence.

One may not view the series in this light (or darkness) but it is true. When we think of Star Wars, we think of the fuzzy Wookiees or Yoda the puppet from the original trilogy or the “good vs. evil” storyline about a young man learning his true potential. We don’t necessarily think of just how much blood has been shed throughout this franchise, and it’s not just because lightsabers do a decent job of not shedding blood.

The franchise has always dampened the “war” in its title in favor of a more family-friendly aesthetic. With Rogue One, the first spin-0ff from the main saga in the franchise, now in theaters, Disney and Lucasfilm seem less concerned with that idea (Entertainment Weekly says it may not be a film to take your kids to). But Rogue One isn’t a resurgence for violence or tragedy in Star Wars; it has been there all along — whether it is limb cutting or young-Jedi killing — Rogue One just does a worse job forcing it out of our minds.

That said, Rogue One is still a PG-13 movie, but it does beg the question: Just how far a Star Wars movie could go if it exceeded its limits? Rogue One comes close on numerous occasions, most notably a gorgeous and grisly Darth Vader sequence that is worth a ticket alone. If a Star Wars movie was not confined to its rating, how successful would it be if it was less concerned with glossing over its violence?

Some will say Rogue One is one of the least Star Wars-esque films in the franchise, but it’s actually not (that honor goes to those other prequels, which seem like distant memories or an alternate-reality at this point). The Star Wars series has always been about a band of rebels rising up against a totalitarian government, only to be disguised as a classic, fantasy good-vs.-evil story. Rogue One is basically that, if not more so than ever before — it just has fewer lightsabers.

With that in mind, Rogue One puts the “war” in Star Wars, or at least doesn’t bother to mask it as much as the main saga does. People die, and while “hope” is a main theme throughout the film, there’s no victory party in an Ewok forest this time around. The stakes seem real, especially in the final act.

In time, the film will be judged on whether it successfully opened a gateway for more risk taking in the franchise, or if it was the outlier in a franchise rooted in its commitment to classic tropes — and whether either of those possibilities was the most beneficial one.

If Rogue One is that gateway, then we have to adjust to an era in the franchise where an R-rated Star Wars might be a possibility. Back in April, I wrote about how Star Wars needs to bypass the curse of cinematic universes plaguing our film franchises today. So while the prospect of an unrestricted Star Wars film is tempting, it would also have to be within the confines of what is necessary.

The next spin-off to hit theaters will be a Han Solo film in 2018, which will no doubt be much different tonally than Rogue One. The next spin-off after that, though, is still up in the air. Josh Trank was originally tapped to direct, but left the project last year after his Fantastic Four movie flopped. (Trank said that he just didn’t want to take on another big franchise right after that film, however.)

The film was reportedly going to be a Boba Fett stand-alone film but is still in limbo. Entertainment Weekly has reported that Disney and Lucasfilm are still in talks about what direction to take the franchise following Episode IX in 2019, but after this new trilogy is complete, Lucasfilm president Kathleen Kennedy hinted that stand-alones could be the way of the future. That would certainly pave the way for more experimenting. If that Boba Fett movie ever gets made, which would in essence be a movie about bounty hunters, it could further those discussions.

In an interview with The Los Angeles Times, Rogue One’s visual effects supervisor John Knoll talks about this experimenting, and what Rogue One director Gareth Edwards envisioned for the film:

“Kathy (told) us that these standalone movies can have a little more freedom to do genre and style experiments. Rogue One was envisioned as sort of a spy thriller/war mission movie. And Kathy mentioned the other day that the (planned standalone) Han Solo movie is going to be a bit more of a Western in terms of structure and tone. I love that. I think it’s really cool we can do these experiments in this giant playground.

Gareth wanted to do Rogue One as a more gritty and realistic war film. Everything was about, “What can we do to inject more realism into this?” We thought, ‘That would actually be interesting and fun to break away from a style in the Star Wars universe where the shots are all super-carefully composed and there’s a bit of an artifice to it.'”

This all points toward the realization that Star Wars could in fact push its boundaries in ways we haven’t seen. Rogue One is a tipping point but still plays it safe to an extent. Parents are still going to bring their children to see the film, and while they may have to have longer, more in-depth discussions about what they witness, it’s not going to scar them.

The question now is, after 2019, is that the kind of Star Wars movie we want? An exchange between two of Rogue One‘s main characters may hold an answer. Jyn Erso, played by Felicity Jones, is talking to her former mentor Saw Gerrera, played by Forest Whittacker, about the Empire.

Gerrera asks “You’re fine with all of those Imperial flags flying above you?” (paraphrasing)

If Star Wars ever gets to the point where it is making an R-rated film, it will excite many and leave others unsettled. For the unsettled, maybe they will just have to not look, because it sounds like anything is possible going forward.

Just remember, once you get past the cute droids and creatures, Star Wars is shrouded in a history of violence, whether we like it or not.