Set during New York City’s winter of 1981, writer-director J.C. Chandor’s urban drama A Most Violent Year earns its title from some sobering statistics: The not-so-Fun City served as a troubling backdrop for rapes, robberies and more than 2,100 murders before the year ended.

Although Rudy Giuliani’s mayoral administration would clean up the Big Apple over the next decade, the grim vision of Manhattan as a literal hell on Earth nevertheless spawned far more cinematic brickbats (think of Martin Scorsese’s Taxi Driver or Walter Hill’s The Warriors) than love letters (Woody Allen’s rhapsodic Manhattan) during the 1970s and early 1980s. Chandor doesn’t get nearly as atmospheric, yet he does heap some grit, graffiti and grime atop his sleek crime story about an immigrant entrepreneur trying to do the right thing while living the American dream.

Given such honorable intentions, however, Chandor’s protagonist might seem a little too good to be true. Abel Morales (played by Inside Llewyn Davis’ Oscar Isaac), magnate of the Standard Oil company, is eyeing coveted waterfront property, owned by an Orthodox Jewish rabbi (Jerry Adler, looking like Robert Loggia), that will greatly enhance Standard’s business viability.

Abel has 30 days to secure sufficient financing to seal the bargain, but that’s plenty of time for such high hopes to head south. For starters, Standard’s oil trucks have become easy targets for daytime hijackings, perhaps initiated by a rival fuel outfit. The Teamsters demand that Standard’s drivers should start carrying guns for protection, which Abel opposes on moral and legal grounds.

There’s also a pesky district attorney (David Oyelowo, who has won acclaim for his work as Martin Luther King in Selma) who intends to nail Abel on fraud charges. At Abel’s side, for better and for worse, is his sexy spouse Anna (Jessica Chastain), a mobster’s hard-nosed daughter who knows what needs to be accomplished for the business to prosper, even if it means cooking some books.

Chandor’s third feature, following the 2011 Wall Street drama Margin Call and 2013’s All Is Lost featuring Robert Redford’s one-man show, has been pegged by some reviewers as reminiscent of the late Sidney Lumet, the auteur of Manhattan-based classics such as Serpico, Dog Day Afternoon and Prince of the City. While flattering praise, Chandor ultimately lacks Lumet’s kinetic urgency to merit that comparison. 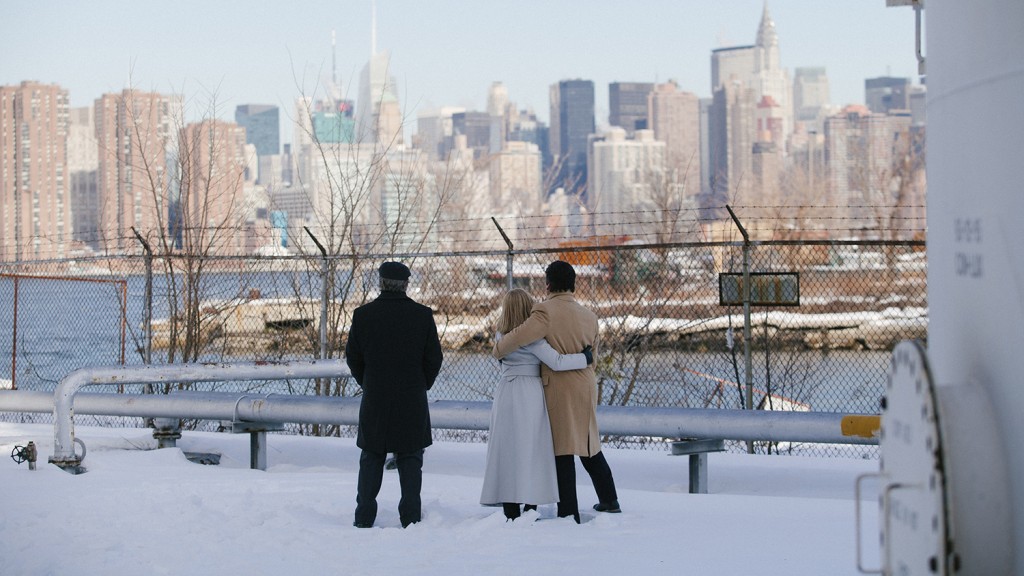 It’s all about eye contact for Abel. In one memorable scene that shows him lecturing newbie door-to-door salespeople on how to close a deal, Abel maintains that staring down a potential heating-oil client, even past the point of squirmy discomfort, is the best way to get him to sign up.

Chandor’s moody melodrama does take a few breaks from behind-the-doors machinations, however, with a pair of well-staged action sequences involving Standard’s oil rigs. The first takes place in broad daylight as a Standard trucker fires shots at thugs while defending his cargo atop the busy 59th Street bridge. The second sequence concerns Abel’s manic pursuit of one of his stolen trucks as it careens through elevated train tunnels. Both interludes are handled with brisk efficiency, as Chandor’s cameras take viewers to fresh locations that do not seem to have been glimpsed a zillion times on TV’s Law & Order.

Director Chandor coaxes a brassy turn from Jessica Chastain, whose Anna sounds like a flinty GoodFellas hausfrau, plus she has some scene-stealing bits that include a casually shocking moment involving some road kill. Elyes Gabel offers a sympathetic performance as a gun-toting Standard driver who becomes an unfortunate casualty in Abel’s struggles against the district attorney.

And comic actor Albert Brooks, as Abel’s trustworthy lawyer, commendably plays it straight, even as he’s emoting underneath a truly odd hairpiece that feels like it belongs on an American Hustle noggin.

Bill DeLapp is the managing editor at the Syracuse New Times.