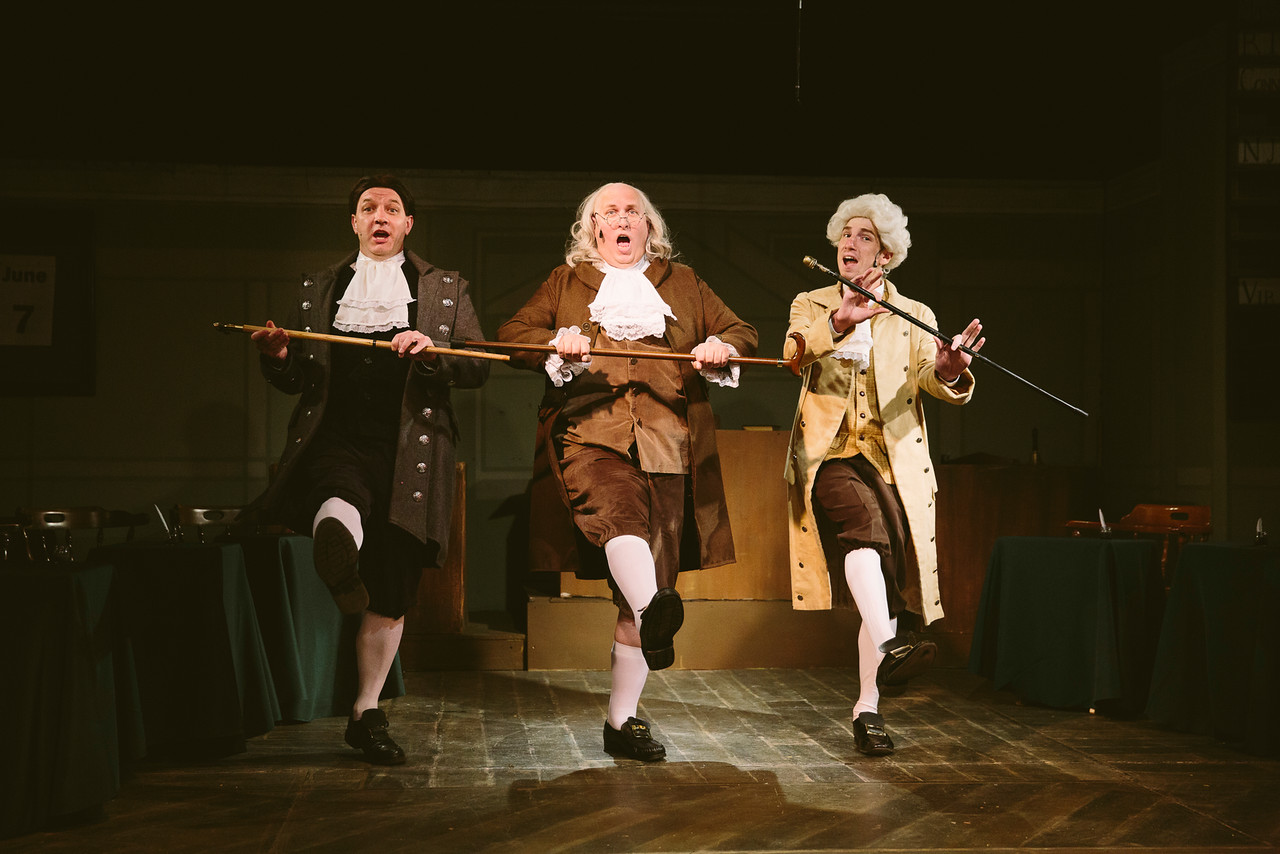 Both political parties can agree that “1776” is a hit.

Central New York Playhouse’s production of 1776 (running through July 2) is a labor of love, more than many other shows opening this summer.

Although Czarny has never said as much, the success of 1776 must have prompted him to found his own company, which has changed names and venues and is now completing five years at Shoppingtown Mall. So it’s time to revisit the sweetness of a keynote hit.

Some may be familiar with 1776‘s backstory and the difficulties of getting it up and running. One-hit wonder Sherman Edwards thought real history was both interesting and dramatic without distorting or romanticizing the record of what happened. The protected and raucous debate at Philadelphia’s Independence Hall could have come out differently, and its implications still matter. Twenty-seven men in knee breeches and wigs debated, and often they all have to be on stage at once. We also see two women, Abigail Adams (Cathleen O’Brien Brown) and Martha Jefferson (Kasey McHale), conjured up from a distance.

In casting so many roles, Czarny has lured two stars and relied on some versatile company regulars, but also called in chits from people not usually linked to his outfit. Baritone Bob Brown might be one of the most familiar faces in town, but audiences who have known him for a generation are in for a surprise, and not just because he sacrificed his beard for the role.

The John Adams of history and of 1776 was an irritating gadfly who admits to being “obnoxious.” As Adams sits in front at stage right and is involved with everything, Brown must often set the scene just by the way he listens and reacts. Brown’s eyes and cheekbones have never been so emphatic. Musically he carries more weight than any other player, delivering the goods in his final number, “Is Anybody There?” — really a call to arms.

It matters not that Brown looks very little like the historical John Adams, something of a shrimp, or even Paul Giamatti, who portrayed Adams memorably in an HBO miniseries, but he is shorter than his principal opponent John Dickinson (Steve Gamba) of Pennsylvania. Director Czarny’s deftest move is in making Gamba’s Dickinson such a formidable adversary, sometimes overpowering Adams. Not only is Dickinson no narrow-minded crank, he’s utterly charming in his Act II gavotte, “Cool, Cool, Considerate Men,” choreographed by Kasey McHale.

Although few musical numbers have had much life beyond the show, Abel Searor’s full-bodied musical accompaniment — including six players, with reeds and strings — keeps the production flowing. Cathleen O’Brien Brown, one of the area’s top sopranos, plumbs the maximum emotion from her duets with John, “Yours, Yours, Yours” and “Compliments.” As Martha Jefferson, Kasey McHale presents an expressive soprano not displayed before.

Among the company regulars breaking away from type, first place goes to Greg J. Hipius, who shaves half his pate to play Benjamin Franklin. Unlike previous Bens who have favored acid retorts, Hipius prefers a more agreeable founding father who follows his sallies with a Cheshire Cat smile. Distinguished tenor Liam Fitzpatrick as Thomas Jefferson is almost unrecognizable in a red wig but skillfully draws attention to himself for the first third of the action, where he asserts an anticipatory presence.

Three roles are designed to deliver show-stopping numbers. The most startling of these is Eric Feldstein’s Rutledge of South Carolina, the real skunk at this garden party. His Mephistophelean “Molasses to Rum” is an unsettling paean to the profits to be made from slavery. The number also points to why Adams and Franklin felt the acceptance of slavery was the price of declaring independence, a key dilemma in 1776 and still the major moral question in American history.

The high-spirited, pun-filled “Lees of Old Virginia” is one of the show’s few purely comic numbers. It marks the welcome return of veteran player Daniel Bostick as Richard Henry Lee. Winning in quite a different way is the poignant lament “Mama Look Sharp” from the hard-pressed Military Courier, with Jesse Navagh reprising his role from nine years ago.