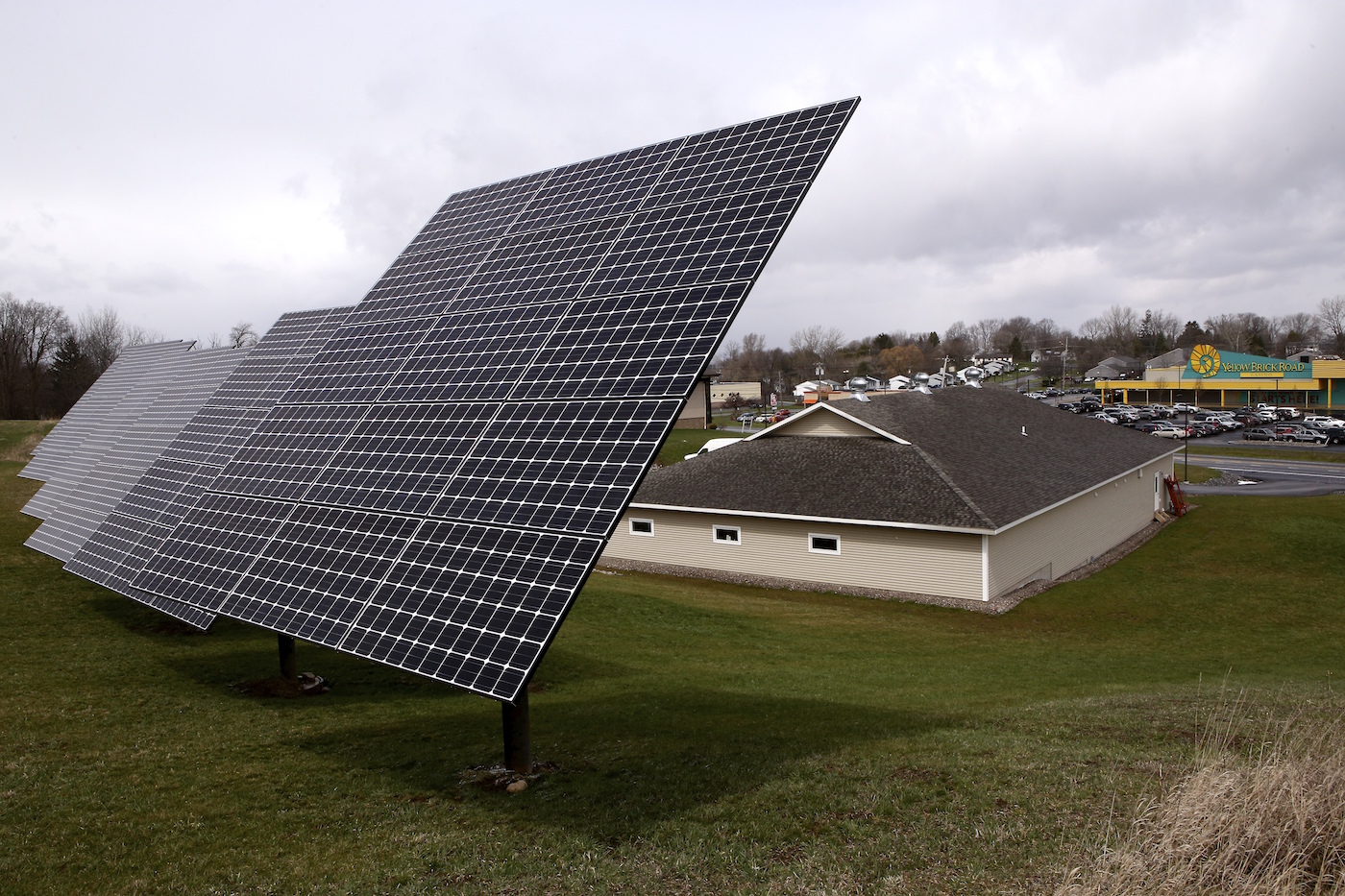 When Dan Kingsley made plans to build a new facility for his physical therapy practice in Chittenango, he considered all of his options. “We could have done anything,” he said. “It was a dream of mine to go green. I wanted to be part of the solution, not the cause of global warming.”

The result of his efforts — with advice from his engineer father and brother — is a 6,000-square-foot, net-zero building that is heated and cooled with 10 tons of vertical closed loop geothermal. All of the energy for the 2014 Chittenango Physical Therapy building on Route 5 comes from 35 kilowatts of solar photovoltaics on adjustable poles behind the building. Kingsley decided not to connect to the natural gas line in front of his new building. The building is outfitted with LED lights. 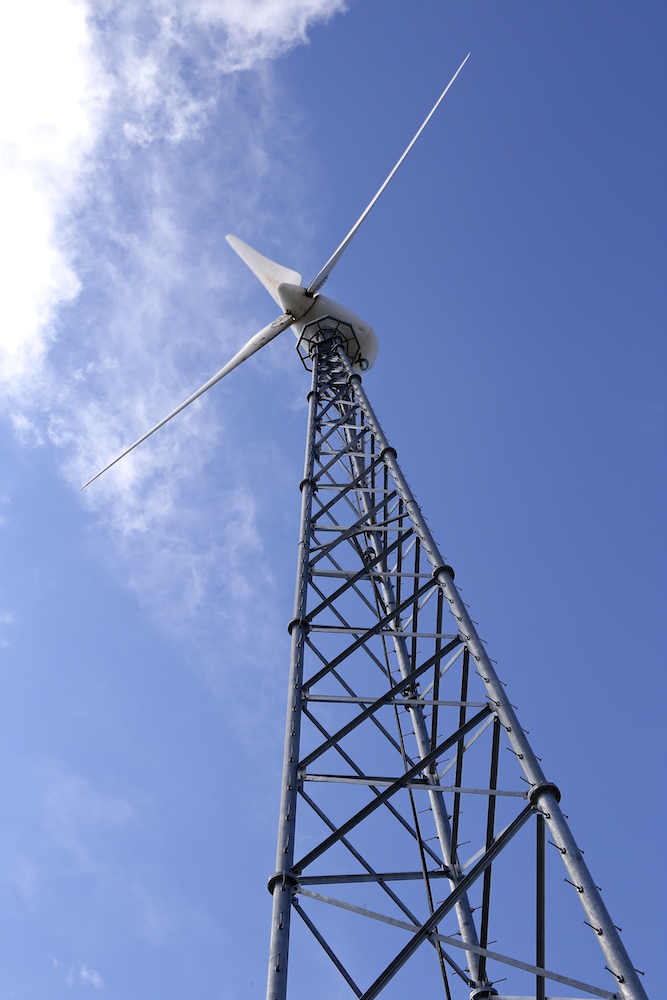 Kingsley went green out of concern that climate change will destroy the world his 10- and 12-year-old daughters will live in. He also wants to see the United States less dependent on oil from the Middle East.

Key to Kingsley’s decision to use renewable energy was its financial benefits. The power bill on his old building — half the size, but clearly not energy-efficient — was about $1,000 a month. Now it’s $22.

“I plan on being in business for another 30 years,” he said. “The return on investment for solar is about six years, and it’s about 10 years for the geothermal.”

Kingsley’s building is among more than 20 sites on a self-guided tour organized to coincide with Earth Day. On display Saturday, April 23, will be geothermal, solar and wind energy fueling local homes, farms, commercial buildings, schools and municipal settings.

“We want people to see that these 21st-century sources of energy work,” said Peter Wirth, a volunteer with Central New York volunteers Climate Change Awareness & Action (CCAA). The group last fall presented the 2009 documentary A Sea Change to a packed house at the Palace Theatre.

Tour sites include private homes, including those of activist Aggie Lane and environmentalist and Native American advocate Joe Heath; public and private school buildings; and commercial and municipal properties. Some are new builds, and others are retro-fitted with the new technology.

Earth Day, celebrated on April 22, was born in 1970. The worldwide event is now celebrated in more than 193 countries. The first Earth Day put environmental concerns on the national agenda. In December 1970, Congress authorized the creation of the U.S. Environmental Protection Agency.

On Earth Day 2016, the United States, China, and 120 other countries will sign the Paris Agreement, a global agreement to combat climate change. The United States and China are the world’s two biggest polluters, accounting for 40 percent of global emissions.

The deal is the next step in the historic draft climate protection treaty adopted at the 2015 United Nations Climate Change Conference in Paris. It requires formal approval by at least 55 nations representing 55 percent of man-made greenhouse gas emissions.

There’s some urgency to reaching that 55 percent threshold this year. Once that happens, any country that has signed cannot withdraw from the agreement for four years. Should Republican candidates Donald Trump or Ted Cruz, who remain unconvinced that climate change is man-made, win the U.S. presidency, they will be unable to backtrack on the U.S. commitment to reduce global greenhouse gas emissions. 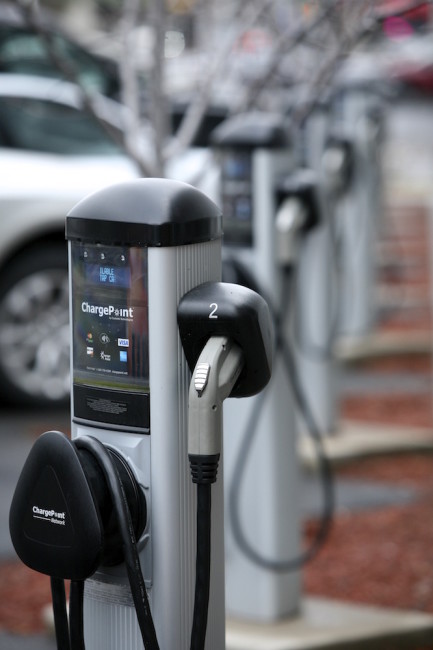 Coastal flooding is also rising at the greatest pace in 28 centuries. For example, it’s increased more than tenfold in Annapolis, Md. The fire season in the U.S. Northwest is 78 days longer than it was in the 1970s.

And don’t get Wirth started on the damage caused by ocean acidification — the subject of the award-wining documentary A Sea Change.

He’s seen the effects of climate change with his own eyes. He and his family visited Glacier National Park in Montana’s Rocky Mountains a few years ago, “In 20 years it will be glacier-less,” he said.

Just weeks ago, Wirth visited the Grand Canyon. A guide told him decreasing snowfall on the Northern Rim soon will affect the area’s water supply.

Closer to home, warmer weather is pushing ticks farther north. That means a greater threat of Lyme disease, a bacterial infection caused by a bite from an infected deer tick. The disease is concentrated heavily in the Northeast and upper Midwest, according to the U.S. Centers for Disease Control and Prevention. Five cases of Lyme disease were reported in Onondaga County in 2001. Forty cases were reported in 2014, the most recent year for which statistics are available.

Kingsley took advantage of a solar tax credit when constructing his Chittenango building. From April to November, the building generates more energy than it uses, and Kingsley gets energy credits he can apply to winter bills.

About 150 people visit his office each week. A screen in the waiting room shows how much energy his system generates, how much energy the building is using and how much the energy costs.

“If you’re going to build, geothermal and solar is a no-brainer,” he said. “You can see the savings.”

Renée K. Gadoua is a freelance writer and editor. She does not have solar panels on her house.

Explore Our Energy Future, which takes place Saturday, April 23, 11 a.m. to 3 p.m., is a self-guided tour of area businesses that will highlight clean energy in action. Sites will feature information about how the owners installed solar, geothermal or wind turbine systems. For information, see ccawarenessaction.wordpress.com. Also available is information about Shared Solar, a New York state program that enables utility customers to offset their energy usage from a solar source located away from their property.

DeWitt Town Hall, 5400 Butternut Drive, East Syracuse. In 2011, the town installed a 55-kilowatt solar array to the building. It has produced 118,606 kilowatt-hours and has prevented more than 183,000 pounds of carbon dioxide from being emitted into the atmosphere to generate that electricity.

Manlius Pebble Hill School, 5300 Jamesville Road. The school installed a 117-panel, 25 kilowatt solar array in 2011. Since then, it has avoided 142,000 pounds of carbon dioxide emissions. The school added a geothermal heating and cooling system for its new library in 2014.

248 Bryant Ave. This 1,800-square-foot home, owned by Kyle Thomas, is in densely populated downtown Syracuse, boasts a 6.44 kilowatt solar photovoltaics system. The building is in mid-installation of a geothermal heating and cooling system.