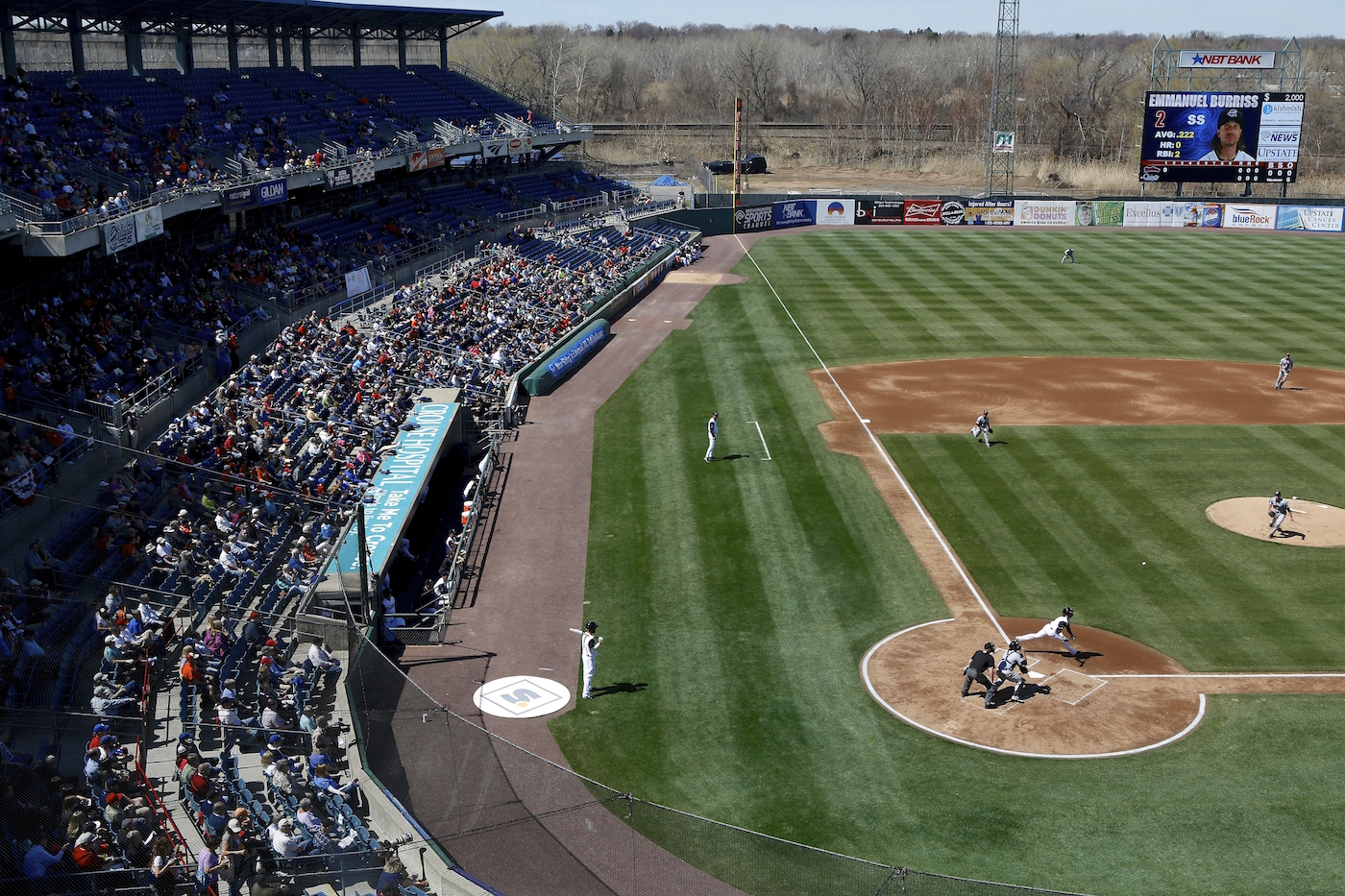 Nine things to know for the Chiefs’ 2016 season.

Eventually, the Syracuse Chiefs will start playing just about every day. And when they do, here are nine things you’ll want to know about the local nine for the 2016 season:

What happened to Opening Day? The Chiefs were scheduled to open this season April 7 and play their first four games at home. However, the early April snow prevented the grass field at NBT Bank Stadium from being ready, so in an unprecedented move the Chiefs postponed the first four games of the season.

“The last thing we want to do is put our fans and our players in danger,” Chiefs general manager Jason Smorol said when the Chiefs announced the postponements. “Because of the heavy snow this past week, and with rain, snow and freezing temperatures in the forecast, we’ve determined that the weather has made playing unsuitable.”

The Chiefs did make up two of the games by playing the Lehigh Valley IronPigs in a “home” doubleheader before no fans April 8 at Lehigh Valley. The Chiefs won both games. The other two games will be made up as parts of doubleheaders on Wednesday, April 20, and Aug. 19 in Syracuse, and the Chiefs’ re-Opening Day was scheduled for this past Tuesday against Buffalo at NBT Bank Stadium.

What about Don Waful Day? The Chiefs planned to honor the former president of the team’s board of directors April 8 on his 100th birthday. But since that game was postponed, the Chiefs will salute Waful, the oldest living Syracuse University alumnus and winner of the 2016 “Spirit of the International League” award, at a later date to be announced soon.

Who are the top prospects? The Triple-A Chiefs’ Opening Day roster included four of the Washington Nationals’ top 10 prospects as ranked by Baseball America magazine: shortstop Trea Turner (No. 2), pitchers A.J. Cole (No. 7) and Austin Voth (No. 9), and catcher Pedro Severino (No. 10). Turner, who batted .314 in 48 games with the Chiefs last season, is also ranked by Baseball America as the No. 9 prospect in the entire minor leagues.

The Nationals’ No. 1 prospect, pitcher Lucas Giolito, started this season at Double-A Harrisburg and should get promoted to Syracuse at some point this season, if he stays healthy.

Who are the familiar faces? The Chiefs’ Opening Day roster included 19 players who have previously played for Syracuse, 17 players who have played in the major leagues, and 11 who have played in the majors with the Nationals. Among the notable returnees are catcher Jhonatan Solano, who has played all or parts of six seasons with the Chiefs and returns to Syracuse after one year in the Miami Marlins’ organization; third baseman Jason Martinson, who led the Chiefs with 19 home runs last season and represented Syracuse in the Triple-A All-Star game; outfielder Brian Goodwin, who played in 81 games for the Chiefs in 2014; and closer Rafael Martin, who had 12 saves in 46 games for the Chiefs in 2015.

Outfielder Matt den Dekker, who played in 73 games for Syracuse last season, was on the Chiefs’ Opening Day roster but was promoted to Washington before the Chiefs’ first game.

Who’s on the coaching staff? Manager Billy Gardner Jr., who guided the Chiefs to the International League North Division title in 2014, returns for his third season in Syracuse. Pitching coach Bob Milacki is back for his second season, and the new hitting coach is Brian Daubach, who managed Double-A Harrisburg last year and spent eight of his five major-league seasons with the Boston Red Sox.

Because the opener was scheduled for a Thursday, the Chiefs are turning the 1:05 p.m. Wednesday, April 13, game into “Mulligan Day” with the usual $1 Thursday specials. And if the temperature does not reach 53 degrees Wednesday, all fans in attendance can exchange their tickets for free ducats to an April or May game.

What are some of the other promotions? From Bark in the Park (April 30 and Aug. 24) to the Trea Turner Garden Gnome giveaway (June 19) to Star Wars Night (Aug. 20), the Chiefs have a promotion — or two, or even three — every game. In addition to the new promotions, the all-seven-days-of-the-week promotions return with Family Sunday, Two-For-Tuesdays, Winning Wednesdays and more. For a complete list of promotions, visit syracusechiefs.com.

What’s a Super Pack? The Chiefs have introduced a Super Pack that offers an $80 value for $55 for the May 20, June 18, June 25, July 2, July 3, July 16 and Aug. 20 games. For $55, fans will receive four box seats, four hot dogs, four sodas, one tub of popcorn, a guaranteed giveaway item and a merchandise coupon. Additional discounted tickets can be purchased for families or groups with more than four people.

For ticket information and to purchase tickets, visit syracusechiefs.com, call 474-7833, or visit the box office at NBT Bank Stadium, located behind the Regional Market on Park Street.